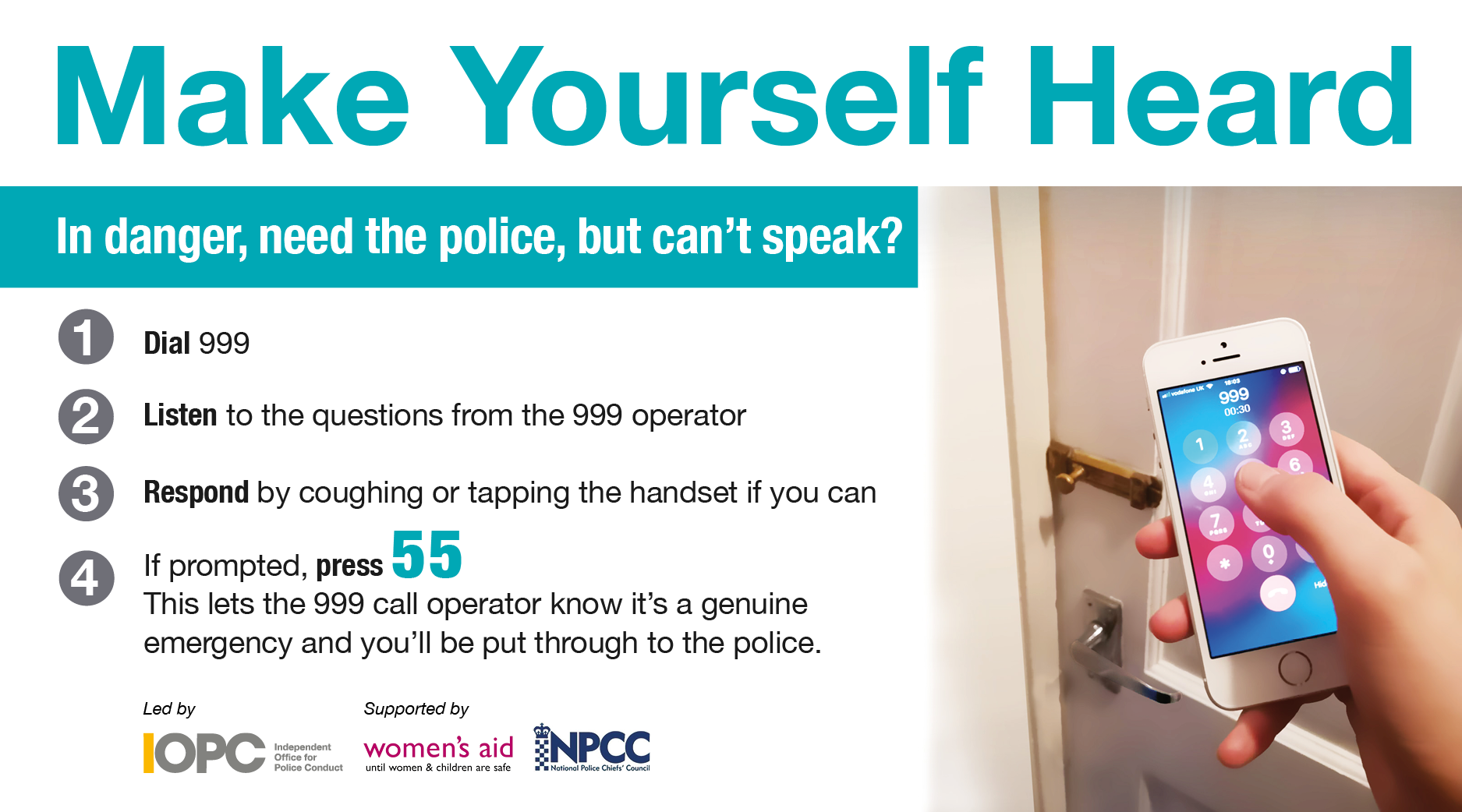 It is being launched today (April 8), by the Independent Office for Police Conduct (IOPC).

The Silent Solution system enables a 999 mobile caller who is too scared to make a noise, or speak, to press 55 when prompted – to inform police they are in a genuine emergency.

The system is well-established in the UK but is only effective if the public know and understand how it works. It could, in extreme situations, potentially save a life.

The IOPC-led ‘Make Yourself Heard’ campaign is being launched during National Stalking Awareness Week (8th – 12th April), with support from the family of murder victim Kerry Power, Women’s Aid and Welsh Women’s Aid, and the National Police Chiefs’ Council.

It is not true that police will automatically attend if you make a silent 999 call. Callers need to listen and respond to questions and instructions, including by coughing or tapping the handset if possible, or if using a mobile phone, once prompted by the automated Silent Solution system, pressing 55.

The system filters out thousands of accidental or hoax silent 999 calls made daily. Around 50 emergency calls from mobiles a day are transferred by a BT operator to police forces in the UK as a result of someone having pressed 55 when prompted, enabling the police to carry out urgent enquiries to respond.

IOPC Regional Director Catrin Evans said: “It is always best to actually speak to a police call handler if you can, even if by whispering, but if you are putting yourself or someone else in danger by making a sound, there is something you can do.

“Make yourself heard by coughing, tapping the handset or once prompted by the automated system, by pressing 55.

“We found from our investigation into police contact with Kerry that there is a lack of public awareness of the Silent Solution system and are keen to share this important information as widely as possible. It could potentially save a life.”

Kerry made her silent 999 call to Devon and Cornwall Police in the early hours of 14 December, 2013 when her ex-partner and stalker broke into her home. Kerry called 999 but was unaware of how to alert police silently. Her ex-partner David Wilder called police later that morning to report he had fatally strangled her.

Kerry’s family said: “Happy, fun-loving and considerate are all words you could use to describe Kerry, however the one thing everybody would mention first would be that she was the consummate mum.

“After a split from her son’s dad and a tough few years, things were on the up, Kerry was back to her old self and was looking forward. Unfortunately this was all brought to an end by the brutal actions of her ex-partner in December 2013.

“After weeks of stalking and inappropriate behaviour, he broke into Kerry’s house with a key he had previously had cut, unable to accept her decision to end their relationship. As things escalated Kerry became worried for the safety of herself and her son, who was asleep upstairs and called 999.

“Although she was not able to speak for the fear of alerting the intruder to her actions, she followed the advice given by a police officer during an earlier visit; that she could call and not speak, as the police held her details they would be alerted and attend.

“Unbeknown to Kerry, this was fiction and nobody came…… a short while after the call, she was strangled.”

Our investigation could not conclusively identify the wording the police officer used when advising Kerry about making an emergency call however it was clear she did not know she would need to press 55 when prompted by the Silent Solution system.

Lisa Johnson, Manager of Direct Services at Women’s Aid, said: “For survivors of domestic abuse calling the police might be too dangerous. Many abusers will threaten to hurt or even kill them if they try to speak out about the abuse. This means that for far too long many women have not been able to access the emergency support they so desperately need from the police.

“For a long time we have been encouraging survivors to use the Silent Solution system to make a silent 999 call if they feel it would be dangerous for them to speak to the call operator. That’s why we are pleased to work with the IOPC to help raise awareness of the system so that survivors can call 999 without putting themselves at further risk and prevent further lives, like that of Kerry Power, from being taken.”

National Police Chiefs’ Council Lead for Contact Management, ACC Alan Todd said: “One of the fundamental roles of police is to help people in an emergency. The police service receives 12 million 999 calls each year, and a small number of callers need to use the ‘Silent Solution’ as they are not able to use their voice during an incident.

“This solution ensures that those who need assistance can make themselves heard through a simple and straightforward process.”

As part of the Make Yourself Heard campaign, the IOPC have produced ‘How to Guide’, which we hope will be shared widely to raise awareness of the Silent Solution system and debunk the myth that a silent call by itself will automatically bring help.