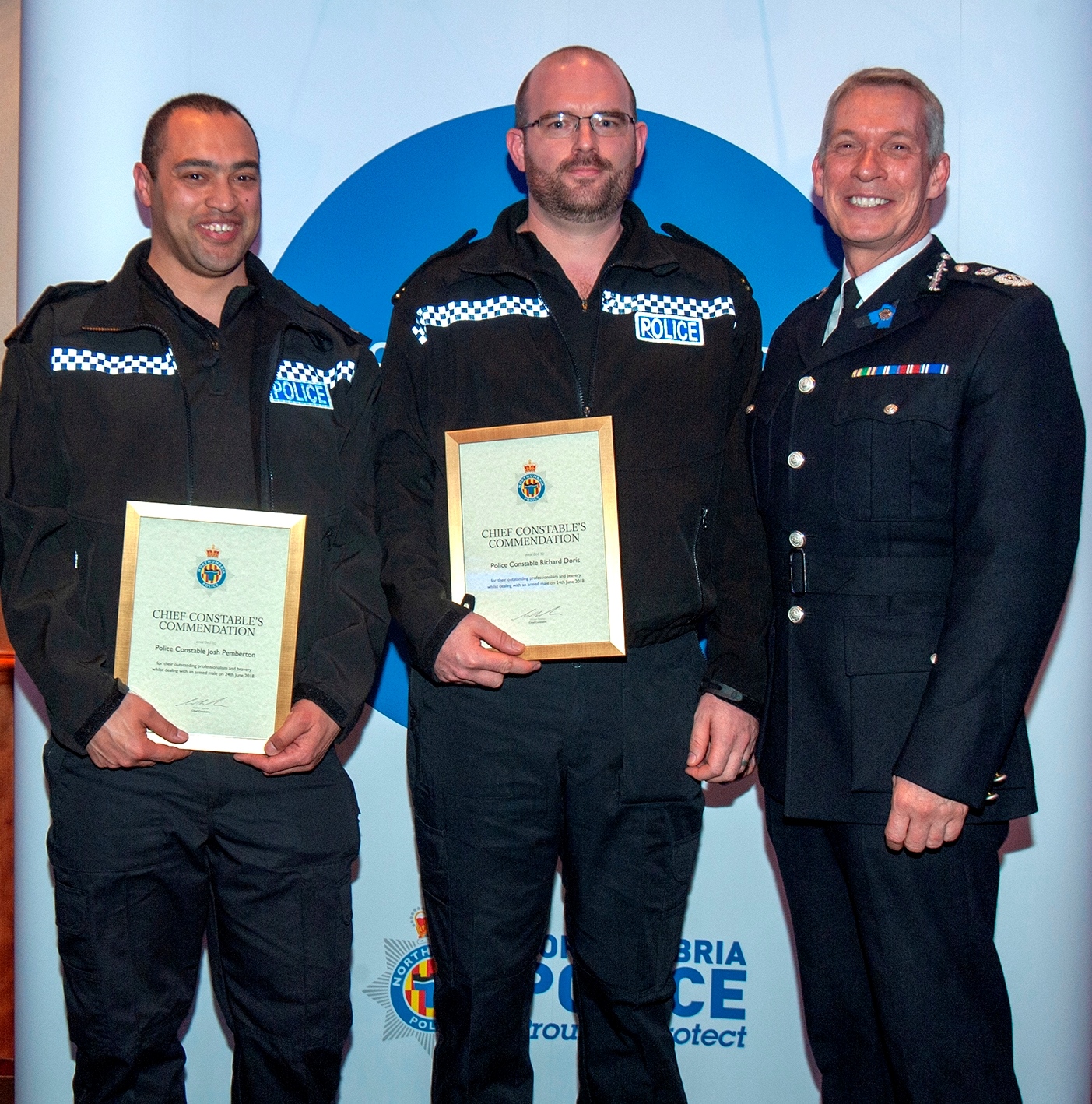 PC Richard Doris and PC Josh Pemberton were among officers called out to a disturbance at an address in the Ashington area last year where a man was making threats to his then-partner.

During the 999 call the offender was heard shouting that he had a knife and a handgun on him.

Officers turned up at the scene and were confronted by the man who was intoxicated and aggressive whilst shouting that he ‘wanted to fight’ with officers.

The offender quickly locked the front door which prevented officers from getting to him and his terrified partner who remained on the phone to police.

Two young children were also in the house asleep at the time.

The offender continued to threaten officers from inside the property whilst persistently following his partner around.

She was able to unlock the front door without the offender knowing – but it was then that the intoxicated man appeared at the door brandishing a meat cleaver.

He then pulled out what appeared to be a small black handgun and started to walk towards officers.

The man then ran back to the front of the property and kicked in the door, before vanishing inside still holding the gun.

Moments later, he appeared to the side of the house with a machete in one hand, and a bottle in the other.

PCs Doris and Pemberton challenged him and both drew their Tasers however, were able to safely disarm the man and force him to the ground without the need to discharge them.

The handgun was later confirmed to be a BB gun – though the officers at the scene were unaware of this when they made their brave arrest.

The offender was arrested at the scene.

He was charged with possessing an imitation firearm with intent to cause fear of violence, possession of a knife blade or sharp pointed article, and criminal damage.

He was later jailed at Newcastle Crown Court for three years after pleading guilty to all offences. An order was made for the forfeiture of the BB gun and meat cleaver.

A top cop within the Force has praised the officers involved and put them forward for a Chief Constable Commendation award.

Chief Superintendent Janice Hutton, Area Commander for Northern said: “I am incredibly proud of our officers who showed tremendous courage when dealing with such a dangerous and unpredictable incident.

“Thanks to their quick and brave actions, they were able to stop an intoxicated and aggressive man from doing his family or themselves any harm.

“They’re a credit to our Force and thoroughly deserved to be recognised for their outstanding police work.”

PC Josh Pemberton talks about the award and dealing with dangerous incidents, he said: “We’re both thrilled and honoured to receive a Commendation from the Chief Constable.

“You never know what you could walk into when you attend an incident and to be confronted with violence and any sort of weapon is frightening but we’re trained for incidents like this and you can’t let it stop you doing your job.

PC Richard Doris finishes by saying: “To us that’s exactly what we were doing- our job. People needed to be safeguarded and a violent offender needed arresting. It wasn’t straight forward but we had a job to do and we knew the victim and our colleagues were counting on us.”