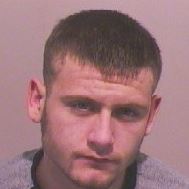 Kevin Moss, 20, was jailed and handed a driving ban as a result of his erratic actions behind the wheel in December 2018

A reckless driver who tore through the streets of Houghton-le-Spring at more than twice the legal speed limit has been jailed.

Kevin Moss, 20, endangered the lives of other motorists and pedestrians as he attempted to evade police during a terrifying seven-minute pursuit.

Moss sped through a red light and went the wrong way around a roundabout in a desperate bid for freedom, driving at more than 70mph through residential areas and the town’s main shopping street.

On Monday (April 8), Moss, of Dean Avenue, Houghton, admitted dangerous driving, driving whilst disqualified and with no insurance at Newcastle Crown Court.

He was jailed for 12 months and handed a two-year driving ban as a result of his dangerous actions.

PC Kevin Paskin, of Northumbria Police’s Motor Patrols Unit , said Moss’ actions behind the wheel could easily have resulted in a fatality.

He said: “Kevin Moss’ erratic behaviour on a busy December morning endangered not only the lives of other road users, but dozens of people going about their everyday lives.

“It is sheer luck that nobody was seriously injured, given the excess speeds that he was travelling in busy shopping and residential areas.

“Even after his arrest, Moss showed little sign of remorse. It is clear that he is a danger to others when behind the wheel of a car, and cannot be trusted.

“Our roads are not racing tracks, and this is a reminder that we take such acts of dangerous driving very seriously. We will continue to deal with offenders robustly and bring those who flout our laws before the courts.”

The court heard Moss refused to pull over when police saw him speeding through the streets of Houghton at around 10.30am on December 13 last year.

After accelerating away from officers, Moss then sped through a red light before going the wrong way around a roundabout on Coaley Lane.

Moss travelled at speeds up to 73mph at one stage in a 30mph limit, with other road users forced to take evasive action to avoid colliding with his red Audi.

Following a seven-minute pursuit, Moss then abandoned the vehicle which was found to include documentation addressed to the defendant.

He was later arrested at his home address and charged with dangerous driving, driving whilst disqualified and with no insurance.

Despite the overwhelming evidence against him, Moss refused to cooperate with police upon interview.

However, this week he admitted the offences at court and was subsequently jailed.