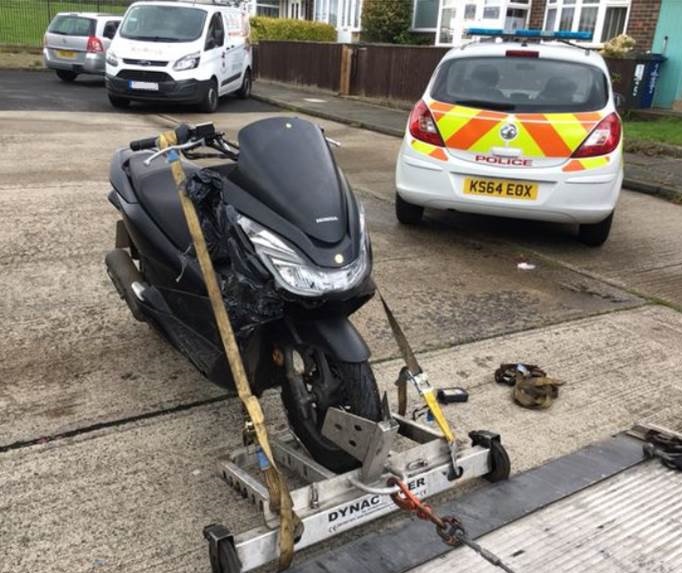 A special taskforce set up to crackdown on criminals using motorcycles to commit crime has revealed incidents fell by more than 25 per cent.

In September last year Northumbria Police revealed the specialist team had been set up to tackle disorder linked to motorcycles.

Initially the team were set up after complaints of anti-social behaviour and nuisance riding that was intimidating vulnerable members of the community.

But detectives quickly established that a large number of the motorcycles involved were stolen and linked to serious criminality.

Raids of properties where these motorcycles were kept has led to big seizures in stolen property, drugs, weapons and cash.

And now detectives on the taskforce have revealed that in just six months they have arrested 44 people as part of the crackdown.

Around half of those arrested are currently going through the court system and new figures show that the introduction of the team has led to a 27 per cent fall in incidents.

Despite the impressive figures, a top cop has said the Force are still receiving reports of violent incidents involving motorcycles from across Newcastle and Gateshead.

Detective Chief Inspector Paul Knox said he is 'concerned' by the reports and warned that anyone arrested faces time behind bars.

He said: "We know that people have concerns about anti-social behaviour with young people on motorcycles and mopeds.

"On the face of it, these incidents may appear to be nothing more than bored teenagers who are causing a nuisance.

"The reality is that many of these individuals are involved in serious criminality and they have targeted innocent people for their own gain.

"They have used violence and weapons to rob people and steal their motorcycles and that does cause me concern.

"Our team of detectives have done a fantastic job to arrest so many suspects in such a short space of time but our efforts will continue.

"We will not tolerate this type of criminality on our streets and anyone who we suspect to be involved should expect a knock on the door.

“I want to thank those residents who have reported intelligence to us and I would ask that you continue to be our eyes and ears on the ground.

"If you know anyone involved in this criminality, or if you notice anyone on a motorcycle who is acting suspiciously on your street, then do the right thing and call police.

"If you have a motorcycle then make sure you keep it in a secure place or that you are using a bike lock or chain to make it difficult for these thieves to steal your property."

The team will then look to secure warrants on addresses and that has already resulted in a number of significant arrests, and convictions.

Det Chief Insp Knox added: "There are a number of different tactics we have been using to identify suspects and a number of people have already been put before the courts.

“The vast majority of young people do not involve themselves in this type of behaviour and show respect to their community.

"We are trying to work with partners to identify diversionary programmes for those young people involved in disorder but we cannot let this type of behaviour go unchecked.

"If you know anyone who has stolen a motorcycle or is riding in an anti-social manner then we need you to do the right thing and inform our task force.

"If it safe to do so then take pictures, take videos and send it to our detectives so we can help make your community a better place to live.”