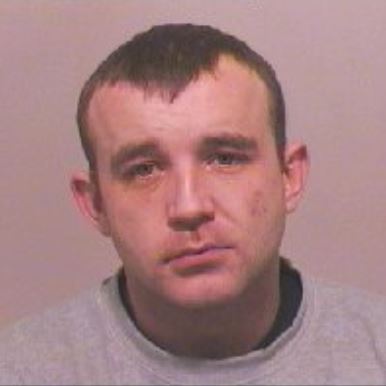 Christopher Robson, 29, was handed a life sentence and can not be considered for parole until he has served seven years

A violent attacker who stabbed a pizza delivery driver and laughed that he was “going to die” has been jailed.

Robson stabbed Aspley twice in the neck and once in the face on Marlborough Road, Washington, in the early hours of November 25, 2017.

In panic and in fear for his life, the victim managed to drive to a friend’s house before undergoing life-saving surgery in Newcastle’s Royal Victoria Infirmary.

One of Mr Aspley’s stab wounds was so deep that it caused his windpipe to be displaced, restricting his airway and causing a blood clot to his neck. He was put into an induced coma as medics battled to save him.

In October last year, Robson, of Manor Road, Washington, pleaded guilty to one charge of attempted murder. He also later admitted carrying two knives in the street in the weeks before the stabbing, as well as possession of amphetamine.

Yesterday (Wednesday) at Newcastle Crown Court, Robson was handed a life sentence and told he can not be considered for parole until he has served at least seven years.

Detective Constable David Holcroft, of Northumbria Police, said: “This was a horrific and unprovoked assault which could quite easily have been a murder without the excellent work from medical staff and the quick actions of the victim’s friend.

“Christopher Robson is a dangerous individual who has shown no remorse whatsoever for his actions, and only pleaded guilty to his crimes at the last opportunity due to the gravity of the offence and the overwhelming evidence against him.

“The streets of Washington are much safer with Robson behind bars."

The court was told Mr Aspley parked his vehicle outside a flat on Marlborough Road after finishing his shift as a pizza delivery driver when he was confronted by Robson.

Following a brief conversation between the pair, the victim asked Robson to hold a pizza box – before producing a lock knife and stabbing Mr Aspley three times to the face and neck area.

As Mr Aspley struggled, prosecutors said the dangerous offender then laughed at his victim, saying he was “going to die”.

Bleeding heavily, the victim managed to get into his van and pressed the central locking, while the defendant was frantically trying the door handles.

Mr Aspley managed to make it to a friend’s house, who then transported him to hospital where he underwent emergency surgery.

In a victim statement, Mr Aspley said: “I can’t hide the scars to my face, and this doesn’t make me feel very good.

“People always ask me what happened and look at me. I’ve slept terribly ever since, I get daily flashbacks – the stabbing has changed me.”

Det Con Holcroft said it has been a “traumatising year” for the victim and praised his bravery throughout what has been a difficult period of his life.

“The victim has suffered serious physical repercussions as a result of this brutal assault, and will have to bear the scars for the rest of his life,” Det Con Holcroft added.

“This frightening incident has affected Mr Aspley not just physically, but also psychologically. It has been a traumatising year for the victim, who left his job as a result of the assault.

“I would like to commend Mr Aspley for his bravery and cooperation throughout this investigation, and I sincerely hope this sentence can bring some kind of closure which can allow him to rebuild his life again.

“I hope this sentence serves as a reminder that we are committed to dealing with violent criminals robustly and hold them accountable for their actions.”