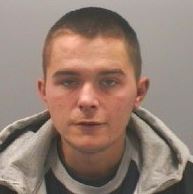 Daniel Orrick, 26, has been sentenced to more than five years behind bars after the horrific attack outside the Coach and Horses Inn in Birtley in January.

A court was told how the stabbing took place at a funeral wake and that hundreds of people from across the region had travelled to pay their respects.

A 42-year-old man and his 16-year-old son were among the mourners gathered at the pub but went outside after getting into an argument at the bar.

Orrick was already standing outside the pub on Durham Road and when he was approached by the older man and they got into a heated conversation.

The man then brandished a pint glass before throwing it at Orricks' head while his teenage son watched on.

Orrick produced a hunting knife in retaliation and lunged at the mourner, only to plunge the blade into the stomach of the teenager.

The crazed knifeman then turned his attention back to the father, before brawling with him on the ground and stabbing him in the leg.

Orrick then tried to flee the pub but was tackled by other members of the funeral party and detained until police arrived on scene.

The 42-year-old’s injuries were not serious but his teenage son had to undergo emergency surgery for a serious stab wound to his stomach.

He has since made a full recovery and Orrick, of Hertford, Allerdene, was charged with two counts of wounding with intent to commit grievous bodily harm and one count of possession of an offensive weapon.

On Friday the 26-year-old appeared before Newcastle Crown Court where he was jailed for five years and four months by a judge. He was also handed a ten-year restraining order.

Following the case, the detective who led the investigation into the brutal stabbing said Orrick was “dangerously out of control” during the assault.

Detective Constable Craig Austin, of Northumbria Police's Central CID, said: "This was a violent attack that left a teenage boy fighting for his life in hospital.

"He was an innocent bystander watching on as his father and Daniel Orrick got into an argument but he has suffered the most serious injury.

"Orrick's behaviour was violent, erratic and from reviewing the CCTV he was dangerously out of control.

"The knife he was carrying was a large hunting knife that has done serious injury to one of his victim and he had no good reason to be carrying it in a public place.

"I am glad that the teenage victim in this assault has made a full recovery as on a different day we could have quite quickly had another death on our hands.

"Our thoughts are with him but also with the family of the man whose funeral had been held on that day and whose wake ended surrounded in police tape.

"Daniel Orrick has shown them no respect and I am glad that he is now spending a lengthy time behind bars after being convicted for these violent assaults."