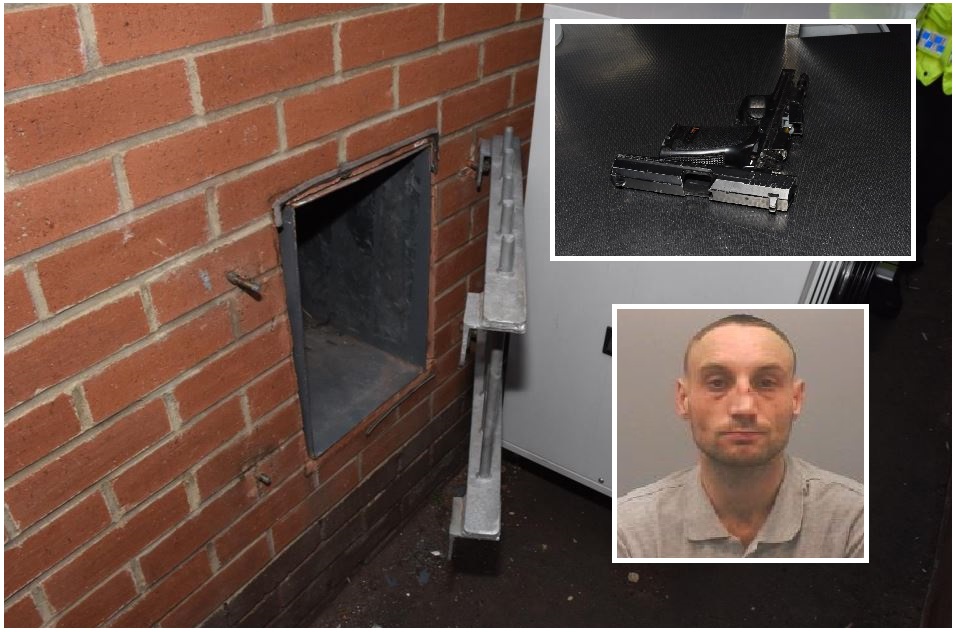 An armed robber who broke into a supermarket through an air vent and threatened staff with a BB gun has been jailed - thanks to the heroics of the store's deputy manager.

Richard Watson has today (Mon) been sentenced to nine years behind bars after he attempted to rob the Aldi supermarket in Westerhope by gun point earlier this year.

A court heard how the 34-year-old had unscrewed an air vent on the exterior wall to gain access to the shop on Stamfordham Road on February 13.

The break-in triggered the store alarm but when police and supermarket staff went to investigate they found the building to be deserted.

Watson was still hiding in the air vent and once officers had left the scene he climbed out of the vent and turned off all the power to the shop.

Deputy manager Brian Moon, 31, went to investigate but when he unlocked the office containing the power switches he was confronted by a masked man carrying a gun.

Fearing for his life, the staff member dropped to his knees and put his hands in the air but the robber hit him across the head three times.

A struggle ensued during which Mr Moon managed to get the intruder in a headlock and disarm him.

Another staff member grabbed the gun, which later turned out to be a BB gun, and called police to report the intruder.

But before officers arrived the criminal broke free and ran towards the air vent in a bid to escape - only for Mr Moon to grab his ankle as he slithered through the tight opening.

The intruder's shoe came off in his hand and the masked robber made his escape having been unable to make off with any stolen goods.

Officers arrived on scene to carry out their enquiries and Mr Moon was taken to hospital for treatment to cuts and bruises sustained in the assault.

Forensic officers were able to find traces of blood and fingerprints belonging to the offender and within days they had identified Richard Watson as the man in the mask.

He was arrested and in March he admitted charges of aggravated burglary with intent and possession of an imitation firearm when committing an offence.

And today (Monday) he was jailed for nine years by a judge at Newcastle Crown Court.

Following the sentence, the detective who led the investigation praised the actions of Brian Moon for helping to put a "dangerous, armed robber" behind bars.

Detective Constable Kelly Adams-Gray, of Northumbria Police’s Central CID, said: "There had obviously been a large degree of planning for this robbery but Watson took for granted the bravery of staff.

“He has gone to extreme lengths to break into the building and then resorted to violence when his plans began to unravel which must have been terrifying for staff working that night.

“Ultimately it was the bravery of Mr Moon and the rest of the staff on duty that night that prevented Watson from escaping the scene with a haul of stolen goods.

“They were confronted with a man holding a gun but showed incredible courage to stand up to him and force him out of the building, despite the risks to their own safety.

“If it was not for their intervention then we may not have had the forensic opportunities that helped identify Watson as the offender.

“Thanks to their bravery a dangerous, armed robber is now behind bars and I hope they can feel proud of themselves for what they did that day.”

As well as the custodial sentence Watson, of Burnstones, East Denton, Newcastle, was made to pay a victim surcharge of £170.