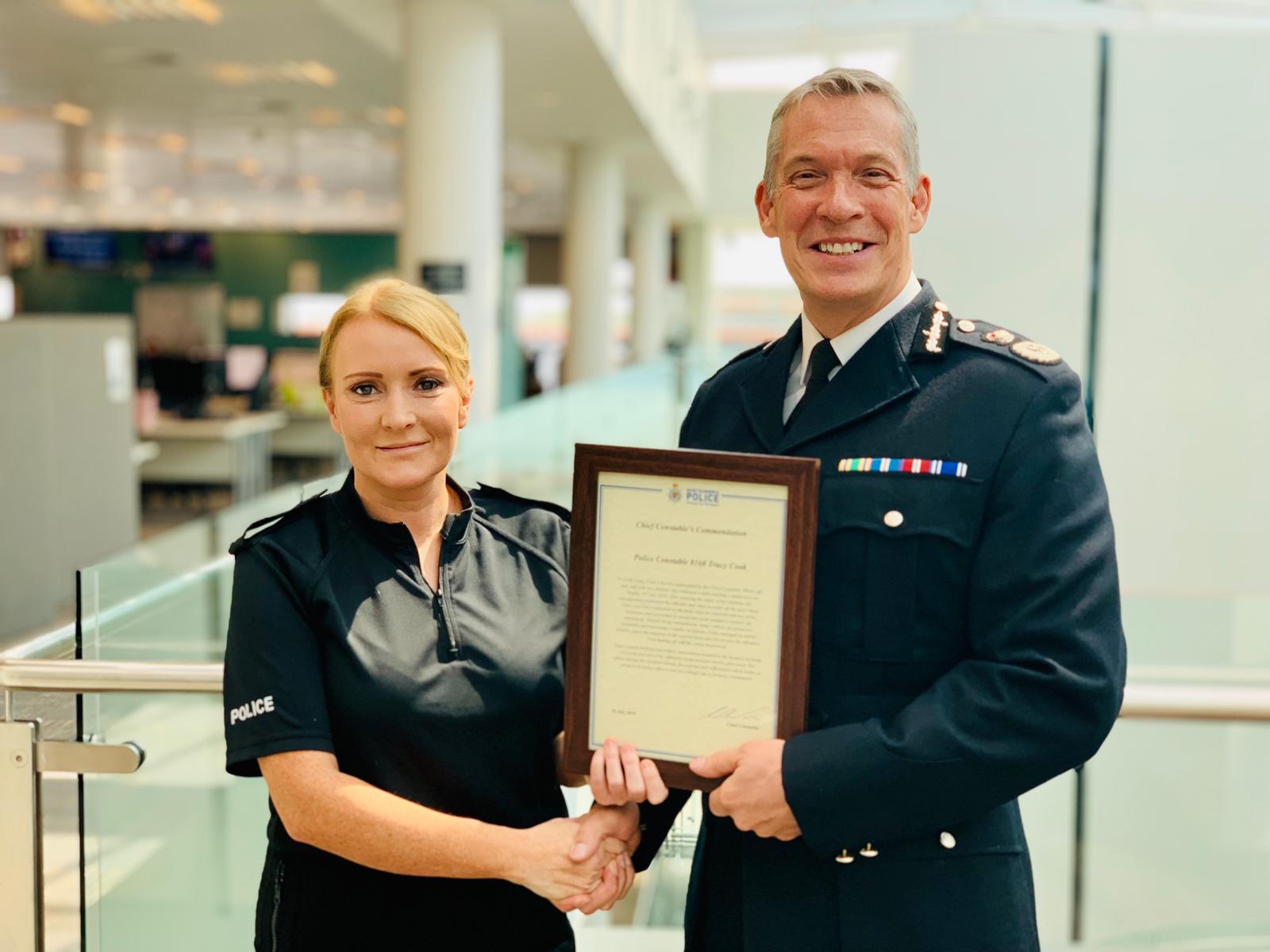 A brave police officer has been praised by the region's top cop after she wrestled with a gang of armed thieves - while off-duty in a sun dress and sandals.

Tracy Cook was visiting relatives with two of her young children as the sun shone in the Newbiggin Hall area of Newcastle on Sunday, July 21.

But she became suspicious after spotting a young man riding a motorcycle without the engine on, a sign that it could be stolen.

Tracy called the control room and provided the registration number of the vehicle, with the call handler confirming it was stolen.

She asked her children to wait at the top of the road after finding the man trying to hot wire the vehicle on a path just off Saint Buryan Crescent.

Upon seeing her he fled the scene but within minutes he had returned with two other men who had hoods covering their face.

The gang threatened her with ammonia but Tracy, who was wearing a sun dress and sandals, grasped onto the motorcycle and pushed it towards the main road.

She was followed by the men and was kicked and punched in a bid to steal the bike - but the neighbourhood bobby refused to let go.

Tracy tried to call for help as she wrestled with the man in the middle of the street at which point residents rushed out of their houses and the gang fled.

Officers arrived on scene and within minutes had arrested a suspect in connection with the incident. Two other men were arrested a short time later.

Now Northumbria Police's Chief Constable, Winton Keenen, has praised Tracy for her bravery and last week presented her with a certificate recognising her actions.

The mother-of-three, who works as a neighbourhood officer in the east end of Newcastle, today (Friday) said she “felt it was my duty" to step in and take action.

She said: “At one point the lad ran towards me and tried to get the bike off me, he tried to kick me and said he was going to stab me.

“He started to shout to his mates to ‘get the ammonia’ so I put the bike on its side to try and make it more difficult for him to steal, whilst trying to fight him off with one hand.

“When the male threatened to stab me and squirt ammonia in my face, I genuinely feared for my life in that moment.

“I feel really proud of my actions but I did feel a bit lost without my baton and my vest.

“All I could think was that this is some poor person’s pride and joy and I wasn’t going to let them have it. I’m a cop at the end of the day and I felt it was my duty."

Tracy was presented with a Commendation by Chief Constable Keenen at Force Headquarters last week and he said the officer went above and beyond.

He said: "Our officers and staff do amazing things every single day to protect vulnerable victims of crime and identify offenders.

"I am always blown away by how far they will go to protect their local communities and so, in many ways, I wasn't surprised when I heard Tracy's story.

"She has demonstrated tremendous courage and was determined to not let these men get away with a bike that she believed to be stolen.

"She talks about how that bike would have been someone's pride and joy and that is the kind of attitude that makes her such a brilliant police officer.”

Chief Constable Keenen presented Tracey with the commendation at Middle Engine Lane Police station last week and spoke to her about what happened.

Her family were also given free tickets to go and watch the Newcastle Eagles after they were donated by the Eagles Community Foundation.

Northumbria Police and Crime Commissioner Kim McGuinness added: “I am still getting to know the Force but every single day I am hearing more acts of incredible bravery.

“This must have been a terrifying experience for Tracy but she has demonstrated the courage and determination that is knitted in to the fibre of this organisation.

“I was filled with pride when I heard her story and I am delighted that she is getting the recognition she deserves.”

An investigation into the theft of the motorcycle is ongoing and the three suspects were released under investigation after being arrested.