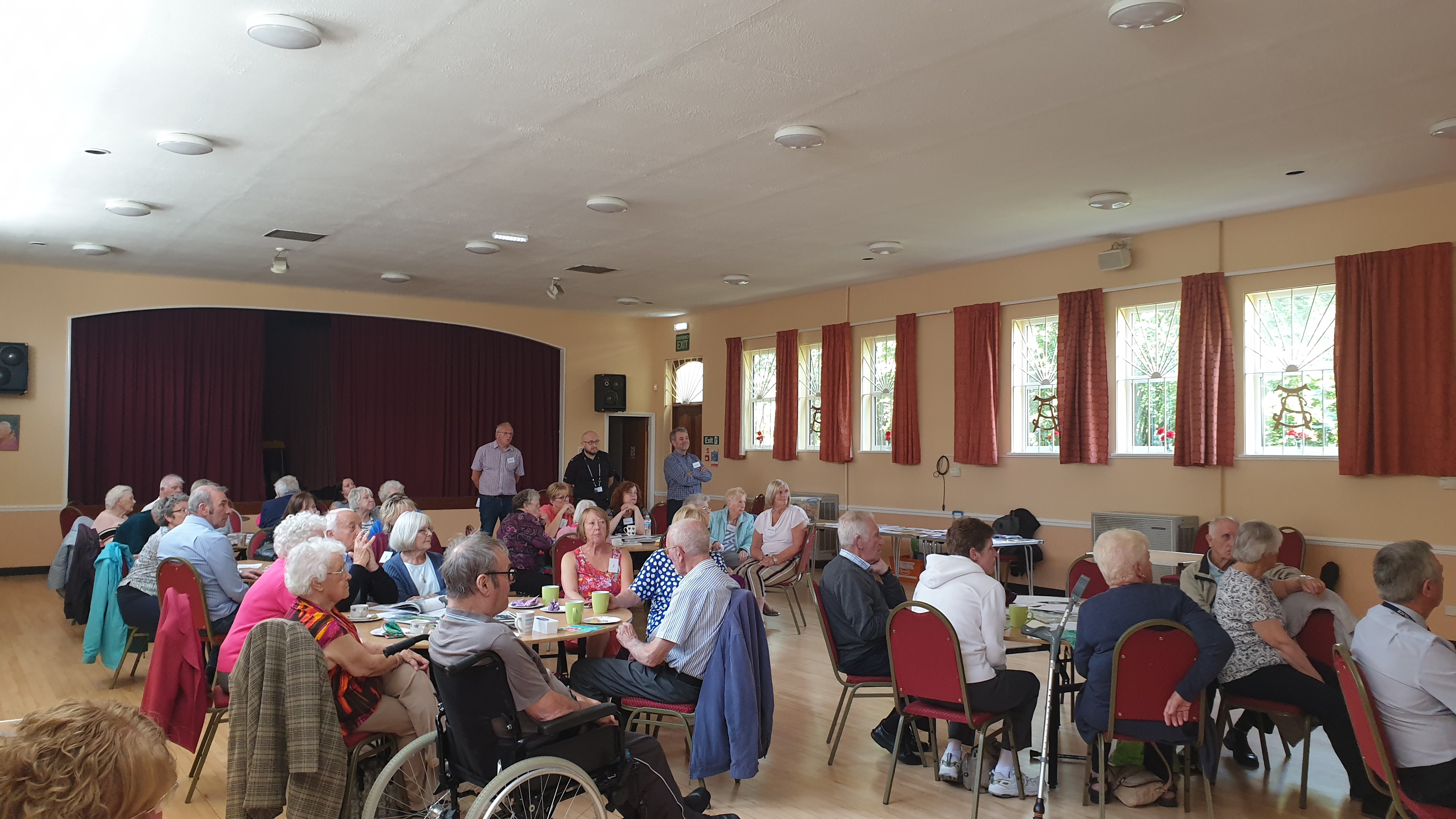 Kind-hearted police officers have paid a visit to a Dementia Cafe to talk about a new scheme that will help them find vulnerable people who go missing.

Officers from Northumbria Police's Community Engagement Team paid a visit to the event at St Aloysius Church in Hebburn.

They had been invited by the group to socialise with visitors to the Dementia Cafe so they could talk to them about the Herbert Protocol.

That is a new initiative that sees the family, friends or carers of people with dementia fill out a form that can assist police if their loved one ever goes missing.

It means officers searching for a vulnerable person will have quick access to a photograph, their routine and other information that could help trace their whereabouts.

Community engagement dog Russell joined the team at the event on Monday afternoon as officers helped those in attendance fill in the form.

Michael Cuskin, 62, set up the Dementia Cafe when his mother Ellen passed away aged 81 in 2016, eight years after being diagnosed with dementia.

He has today (Friday) thanked the police for visiting the cafe and said it was great for them to come and help get people signed up to the Herbert Protocol.

Michael said: "The Dementia Cafe originally came about because in Hebburn there wasn't any facility to allow people who are living with dementia to come together and socialise.

"My mother lived with dementia for eight years and when she died my brother and I got involved with the local library and decided to set up a drop-in.

"People who are living with dementia, their friends and carers come along, socialise, play games, have seated exercise and a sing-a-long.

"We've developed into a very active organisation within the town and it went down really well having the police officers here today.

"Thankfully we didn't have to call out the professional agencies to find my mother because we had an idea where she would go.

"But she did get extremely confused, sometimes slightly agitated, and so the Herbert Protocol is an excellent idea that gives police a profile of a loved one who goes missing within seconds."

Northumbria Police's Sergeant Sally College praised Michael for setting up the cafe and said she enjoyed the "buzzing atmosphere" at the event.

She also said it was important to get people signed up to the Protocol so they can make sure officers have vital information in the "golden hour" of a missing person investigation.

Sgt College added: "The Protocol was launched with partner agencies to help gather information that is vital for us in the 'Golden Hour' when somebody is reported missing with dementia.

"Not everyone appears confused if they do go missing with dementia so we really don't know what we're looking for in some of these cases.

"The form is ideal for us because it can give us the history of that person, whether they have been missing before, where they were found, where they are likely to go.

"It was fantastic to be able to come and talk to people today about the form and actually sit down and help those with dementia and their carers fill in the form.

"Michael has done a fantastic job bringing this group together and there was a buzzing atmosphere at this event. It was great to meet so many friendly faces."

Anyone who wants to find out more information about the Herbert Protocol is encouraged to visit the Northumbria Police website.

Anyone interested in attending Hebburn's Dementia Cafe can find out more information by emailing mcuskin@blueyonder.co.uk or maureen.cairns@southtyneside.gov.uk.