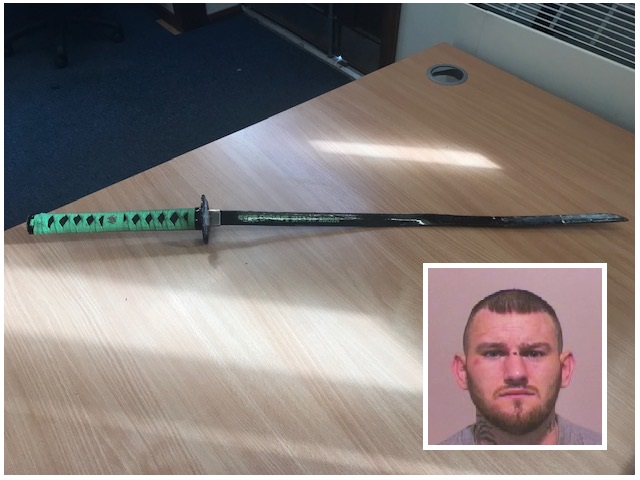 An eagle-eyed officer has been praised by a top cop after his actions off-duty led to a man being jailed for carrying a Samurai sword in public.

Inspector Denise Easdon has applauded the actions of PCSO Bell who was driving through Jarrow on the evening of Monday, August 12, when he noticed a pedestrian in possession of a Samurai sword.

After calling 999, PCSO Bell continued to monitor the man’s movements as he waited for firearms officers to arrive.

Marc Brunton, 28, of Burleigh Steet, South Shields, was subsequently arrested by police and his weapon seized.

Last Tuesday (August 13), Brunton was sentenced to more than eight months behind bars by magistrates in South Tyneside.

“It would have been easy for PCSO Bell to ignore his instinct and not act on what he thought he saw,” Insp Easdon said.

“However, instead he pulled over his car and contacted police – and then followed the man’s movements as he continued to walk down the street with the weapon tucked inside his trousers.

“By giving a clear description of the offender and directing police to a property which he had later entered, PCSO Bell assisted in a swift arrest and ensured that nobody was injured.

“It fills me with pride to know that we have officers such as PCSO Bell who are willing to go above and beyond to keep the public safe.”

Armed officers descended on the Derby Street area of Jarrow after Brunton was seen entering a house in possession of the sword.

When they arrived, an unsteady Brunton stepped outside the address and repeatedly ignored officers’ instructions, encouraging police to “shoot him”.

The offender was successfully detained by officers and was later charged with possessing an offensive weapon.

Brunton pleaded guilty to the offence at South Tyneside Magistrates’ Court and was sentenced to 38 weeks in jail.