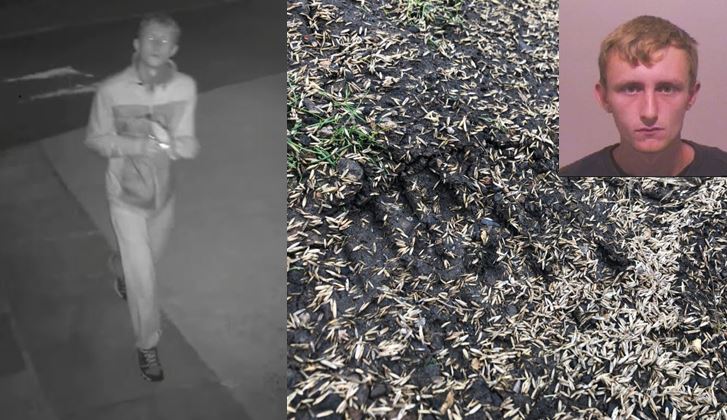 A predatory burglar who left residents “sickened” after he tried to raid their homes while they slept has been jailed.

Kieton Pearson, 20, skulked around a Houghton-le-Spring housing estate in the dead of night trying front doors and hoping to access unlocked properties.

But his dishonest behaviour came back to haunt him as a team of burglar hunters pieced together a CCTV trail that showed him shamelessly going door-to-door in the early hours of June 29 eyeing a quick win.

He was sentenced to 47 weeks behind bars.

Detective Constable Stu Havery, of Northumbria Police’s Southern Burglary Team, said: “Pearson is somebody well-known to officers and his dishonesty has been laid bare.

“He showed little regard for others as he brazenly attempted to break into houses on an estate as the occupants were fast asleep.

“Burglary is an incredibly intrusive crime and victims of this type of criminality can sometimes be made to feel frightened or anxious in their own homes as a result.

“In this case, Pearson was rumbled after a member of the public spotted him acting suspiciously and informed the house’s occupants.

“They, in turn, then called police and officers managed to trawl through hours of CCTV footage to follow Pearson’s movements that morning. He is now behind bars because of his actions.

“The public are our eyes and ears, and while we have officers out on the streets every single day looking to arrest those who prey on our communities, we also rely on residents who see anything suspicious to come forward and report it.

“I would like to thank the victims in this case for their cooperation, and I hope this prosecution sends a strong message to would-be offenders; you will be pursued, you will be caught, and you will be brought to justice.”

The court heard Pearson was spotted by a neighbour acting suspiciously in the Bishops Wynd area of Houghton-le-Spring at about 2.30am on June 29.

CCTV footage showed Pearson approach a locked front door and try to open it, before moving on to two others on the same street.

Later that morning, a resident in Warden Grove discovered a suspicious footprint in his garden that had not been there the previous day.

The footprint was subsequently linked to Pearson, who had climbed over a garden wall from an adjacent garden and tried to open the front door of the property.

Pearson was arrested and subsequently charged with four counts of attempted burglary.

In a statement read in court, one victim said: “The incident has really upset me and my family. God knows what would have happened if the door was open.

“This lad had the gall to try and break in to my house. This crime makes me sick and violated and something should be done to stop him.”

A second victim added: “Although I never suffered any loss, I feel sick at the thought that someone has tried to get in.”

Pearson admitted all four charges at South Tyneside Magistrates Court yesterday (Wednesday). He was subsequently sentenced to 47 weeks in jail.

DC Havery is part of the Southern Burglary Team, a team of dedicated burglar hunters who review every incident that takes place across Sunderland and South Tyneside.

The team, based at Southwick Police Station, review prolific offenders and monitor hotspots so they can identify those responsible for burglaries and prevent them from taking place in the first place.