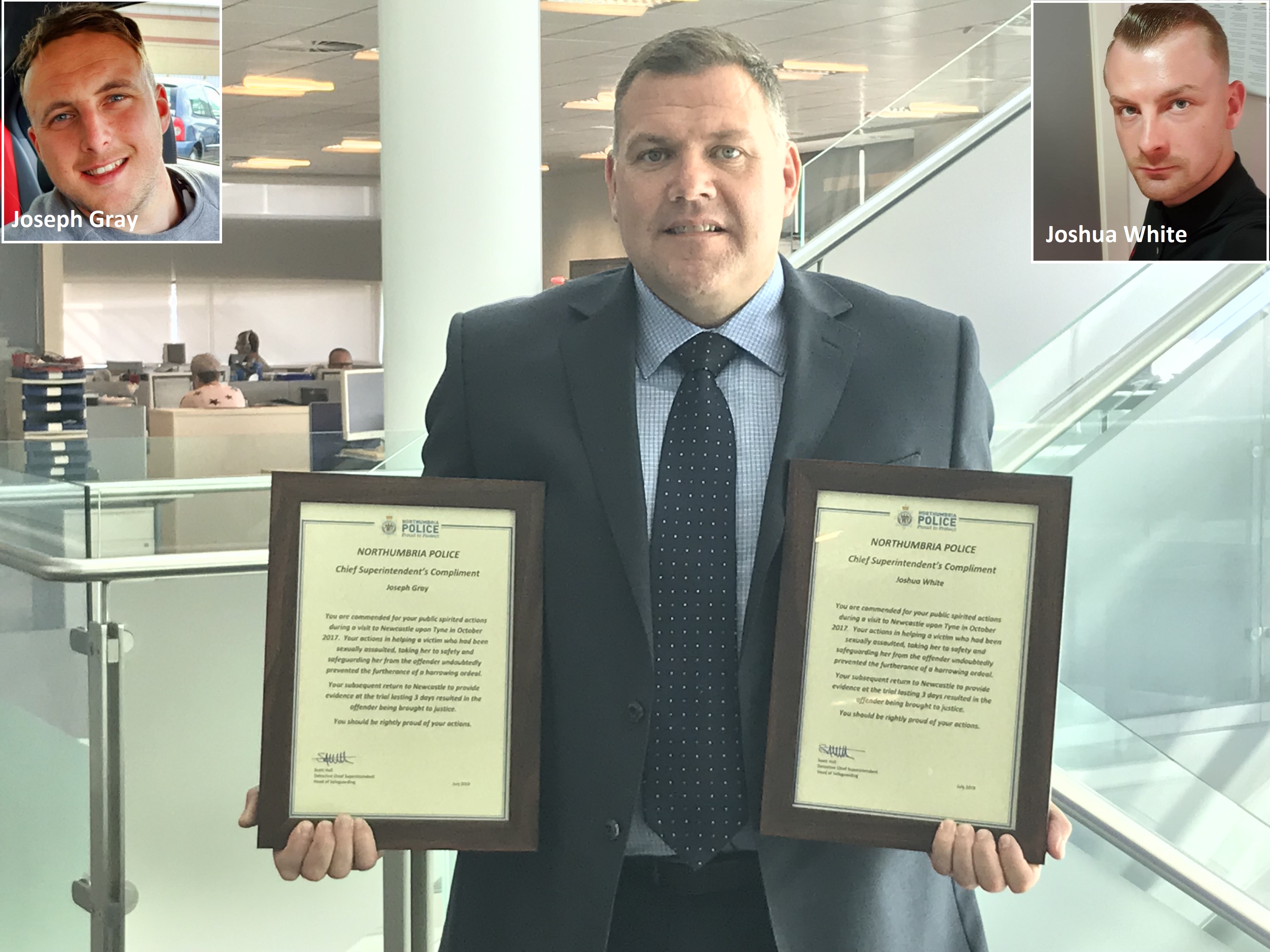 A top cop has praised the actions of two men who helped save a woman who was being sexually assaulted in a hotel room in Gateshead.

The two lads returned to their hotel in Gateshead for the night but in the early hours of the Sunday morning, they heard a woman shouting.  They went to their door where a woman was in the corridor asking for help to get a man out of her room.

When the two men approached the neighbouring room, they found a half dressed man and another woman, who ran out of the room in a distressed state.

They managed to get the man out of the room and took the woman to the reception of the hotel when the police were called.

The woman had been sexually assaulted by Pearce Armstrong, also a visitor to the city who was on a stag do from Belfast.

Police arrested Armstrong and he was charged with sexual assault.

Joshua and Joseph both came to Newcastle in July this year to give evidence at the trail and Armstrong, 40, of no fixed abode but from the Belfast area of Northern Ireland was found guilty by the jury.

He has this week been sentenced to 22 months in prison and will spend 10 years on the sex offenders register.

After the case, the victim praised the two men and asked to contact them directly to personally thank them for all they had done.

The victim believed because of their actions, they saved her from a situation which could have been much worse.

Chief Superintendent Scott Hall has praised the two men, and a friend of the victim who raised the alarm, and has awarded them all Safeguarding Commendations on behalf of Northumbria Police for their actions.

Chief Supt Hall said: "I talk to anyone who will listen about safeguarding being everyone's business and both Joshua and Joseph are the absolute epitome of that.

"Their instincts told them something wasn't right and they did something about it. This victim has suffered an awful sexual assault and because of the intervention from these two lads, they have managed to bring her to safety.

"To also come from London and give evidence in court to support a complete stranger is utterly admirable and on behalf of Northumbria Police - I thank you wholeheartedly."

Northumbria Police has recently launched the "It could be nothing but..." campaign which encourages the public to report something that doesn't feel right to help police protect those who can't protect themselves.

If you see something that doesn't seem right, report it to 101 or 999 in an emergency or report online by searching "Tell Northumbria Police".