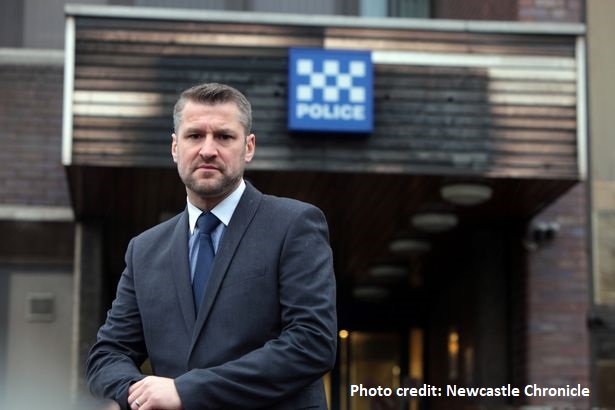 An off-duty detective who was enjoying a quick bite to eat outside a restaurant has been praised by senior officers - after dropping his knife and fork to arrest a shoplifter.

Detective Constable Ian Moore was enjoying his evening off in Whickham when he saw a man running from the nearby Co-op with a handful of suspected stolen goods.

Ian, who works in the Force’s Safeguarding department, sprung immediately in to action and grabbed the suspect as he ran past the restaurant.

He held the man on the ground while staff at the restaurant were quick to call police for back up. At about the same time a call was also made  from the Co-op reporting stolen alcohol from the store.

Officers arrived on scene within minutes and the man was arrested and taken into custody.

Chief Superintendent Scott Hall, who heads the Safeguarding department in which Ian works, has praised the detective for his vigilance and actions.

He said: “I see officers in Safeguarding go above and beyond every day in the work they do but to go home and still go out of their way to fight crime is real dedication to being a police officer.

“I think it is a true representation of just how versatile the role of policing can be. We are human beings like everyone else at the end of the day but when we see something that doesn’t look right - our instincts and training take over.

“Thank you to Ian for his actions, it makes me proud to have him in our department and that his dedication and values are still all about protecting the public and catching the bad guys – well done Ian.”

He said: “It’s just what we are trained to do. It becomes part of your nature to always have an eye out and when we do see something suspicious, our gut instincts take over.

“Your first reaction is to stop them from getting away or hurting anyone, there isn’t really a thought about your own safety at the time.

“Catching shoplifters isn’t often something I deal with these days but our duty is to stop criminals and protect the public so hopefully I’ve done just that.”

The man arrested was charged with shoplifting and was sentenced on Monday, August 19, to 16 months behind bars.