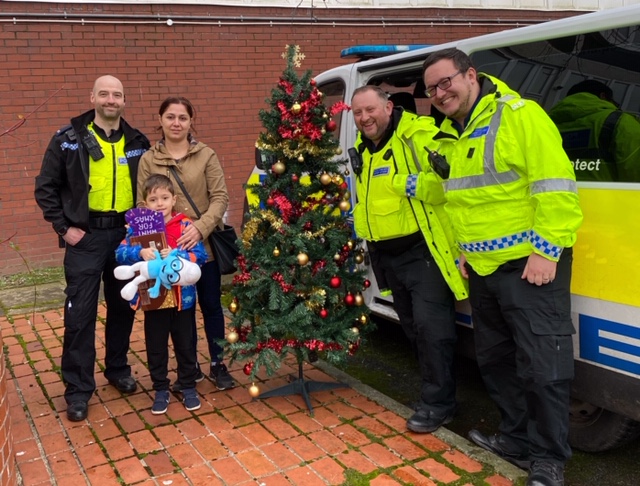 PC Paul Alderson and PCSOs Andy Harrison and Ian Robson dropped in the community centre to see what they could do to support the local community.

They joined volunteers in delivering food parcels and used toys to families in need this Christmas time.

And during the visit they met six-year-old Mohammed Osman who had recently moved to the North East with his mother Zswan and his siblings after seeking asylum in the UK.

Mohammed told officers that he loves Christmas and had his own tree back at home, despite the fact his family are Muslim and don’t celebrate the holiday.

But Paul, Andy and Ian were shocked when the schoolboy told them that his tree had no lights and no decorations.

They decided to pop to the nearby Asda to get some decorations. The supermarket was out of stock but the store manager heard about what they were doing and so donated an entire display tree.

Officers delivered it to Mohammed and his family yesterday along with chocolate selection boxes for the youngster and his siblings.

Sergeant Elliott Richardson, of the Gateshead East Neighbourhood Policing Team, said he was proud of the officers for going “above and beyond” to spread some festive cheer.

He said: “The food parcel service is a fantastic initiative that does some amazing work in the local community.

“That is particularly needed at this time of year and we were delighted to be able to go along to show our support and give advice to residents in Felling.

“There were a number of vulnerable people there and Mohammed and his family are still settling in the area so it has been a difficult time for them.

“We got chatting to Mohammed and he told us about the tree and I am really proud of Paul, Andy and Ian for going above and beyond to bring some festive cheer.

“They may not celebrate Christmas but we know this has made them feel more at home and that is an important part of what neighbourhood officers do.

“Mohammed’s mum has told us that she loves being here because of the kindness being showed to her and her young family and that is what Christmas is all about.

“It just shows that a little gesture like this can go a long way to making a vulnerable family feel safer and more connected to their local community.”