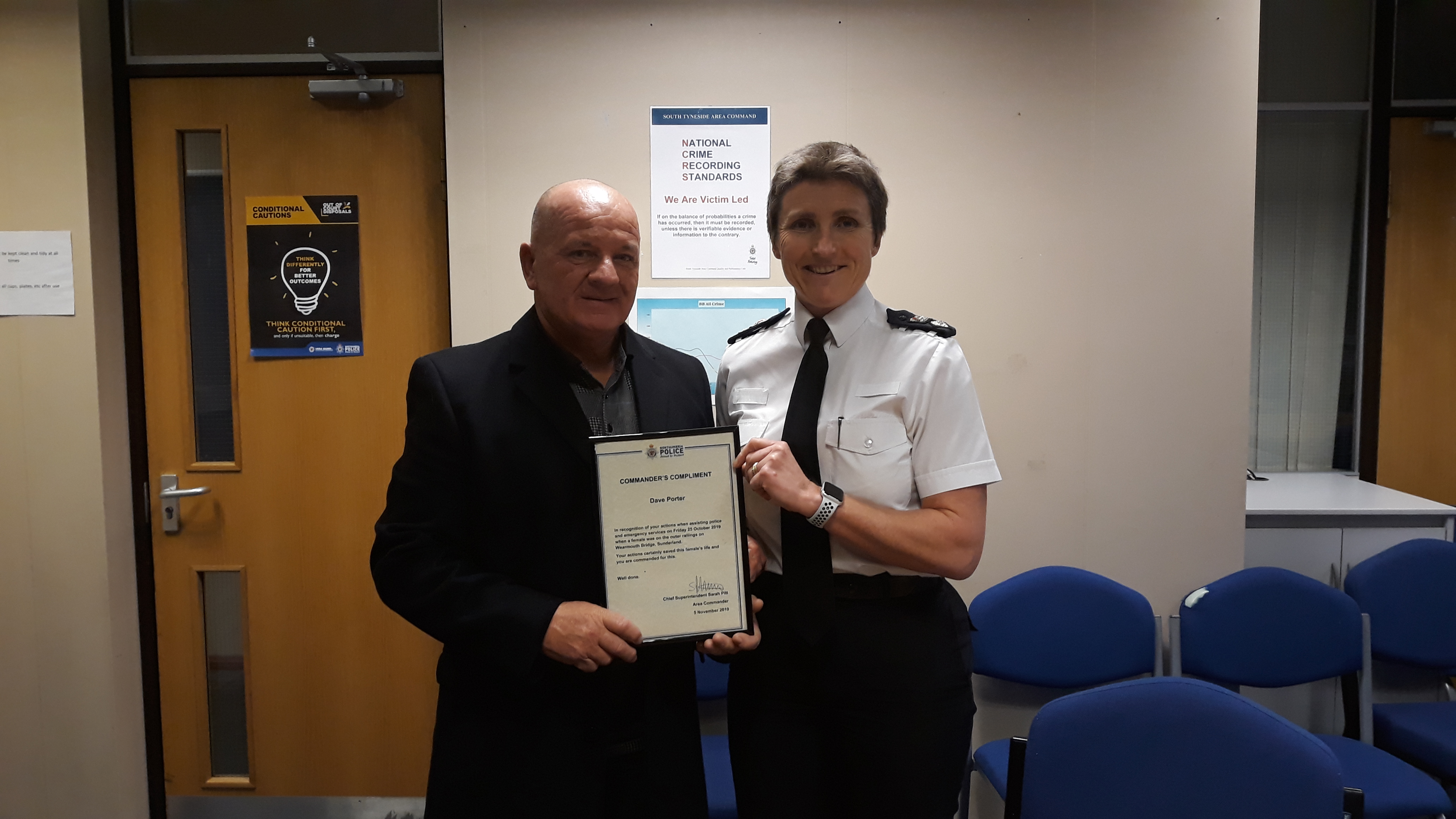 A quick-thinking security guard who helped save the life of a vulnerable woman has received a special commendation by police.

Dave Porter, 65, was travelling between the University of Sunderland’s St Peter’s and City Campus during an early-morning shift when he saw a woman in distress on Wearmouth Bridge.

Concerned for the woman’s welfare, Mr Porter stopped his vehicle and contacted the university’s control room, who then alerted police.

As he waited for officers to arrive, Mr Porter – an experienced security guard of 27 years – spoke with the woman and held her through the railings to prevent her from falling. He then helped police lift the woman to safety.

In recognition of his selfless act, Chief Superintendent Sarah Pitt recently invited Mr Porter into Millbank Police Station and presented him with a Commander’s Compliment.

“I’m humbled to receive this award,” Mr Porter, of Fulwell, said. “I did what anyone would have done to help a vulnerable woman in need.

“I am pleased that she was brought to safety and that I had the opportunity to make sure she did not come to harm.

“I’d like to thank the police, especially Chief Supt Pitt, for giving up her time to invite me into the station and chat about the incident. I never expected any kind of commendation – so I was blown away by the gesture.”

Mr Porter is no stranger to accolades after he was crowned ‘Security Officer of the Year’ in 2017 by the Association of University Security Officers (AUCSO) following his life-saving actions in two separate incidents in Sunderland.

“Dave should be incredibly proud of what he has done,” Chief Supt Pitt said. “This could have so easily been a different outcome, and we are indebted to him for his quick-thinking and selfless actions.

“It would have been easy for him to continue driving and ignore what he had seen, but by recognising the potential danger that the woman was in, police were able to attend and ensure she was left in the care of health experts.

“As a Force, protecting the most vulnerable in our communities is our overriding priority and this case highlights how the public are our eyes and ears. By providing swift information and raising the alarm, I have no doubt that Dave saved that woman’s life.”