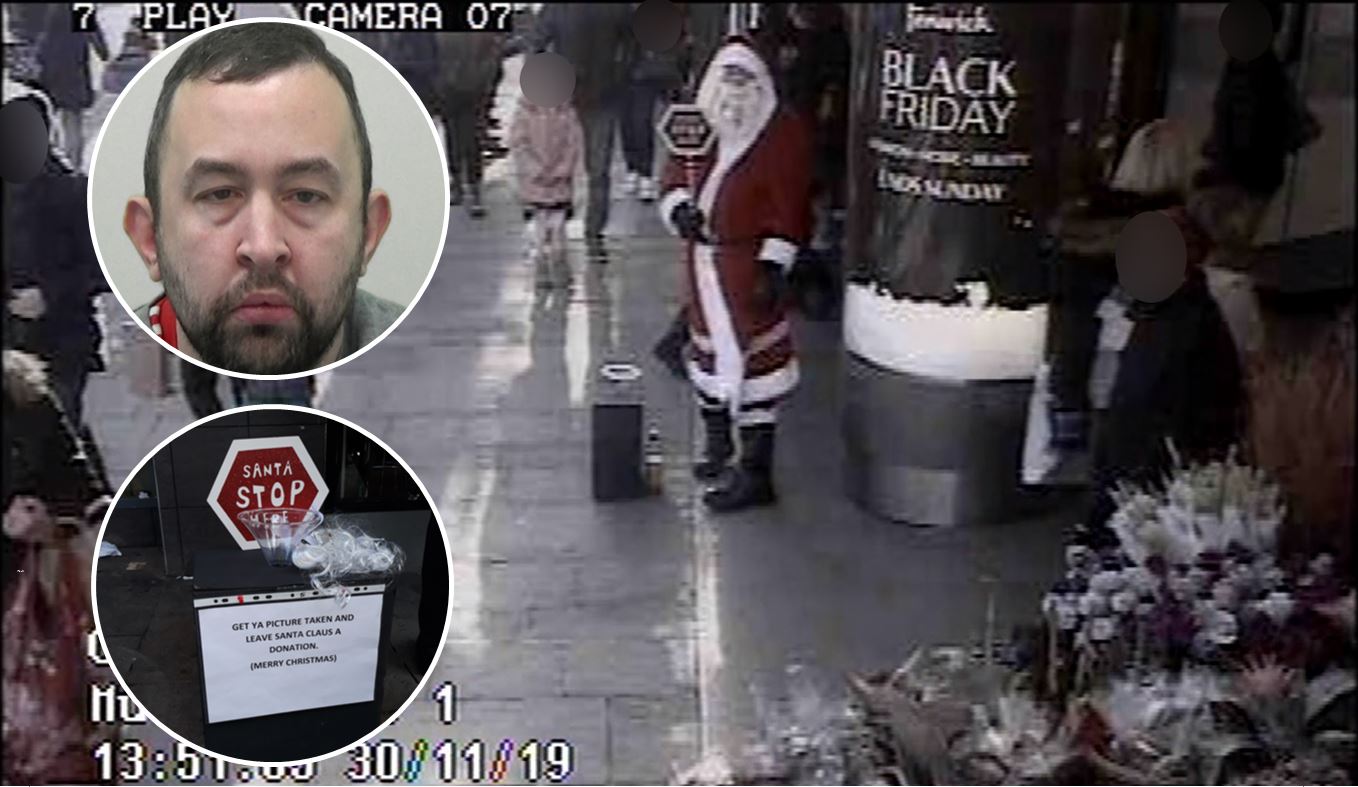 A registered sex offender will spend Christmas behind bars after he dressed up as Santa on a busy shopping street - and offered to take pictures with children for money.

Stephen Brown, 40, has been jailed for six weeks after being arrested by vigilant police officers on Northumberland Street in Newcastle city centre.

He had dressed up as Santa Claus and stood near to Fenwicks’ window offering to pose for pictures in exchange for a donation.

Security staff at the department store were concerned about the stranger and so contacted neighbourhood officers on patrol in the city.

It was then that police discovered he was a registered sex offender and was subject to a lifetime Sexual Offences Prevention Order (SOPO).

Brown had been handed the order in 2012 after he was jailed for five years for possession of indecent images and inciting a child to engage in a sex act.

He was immediately arrested by police on a packed Northumberland Street and taken in to custody at Forth Banks Police Station.

Brown was later charged with breaching the SOPO and remanded in custody to appear at Bedlington Magistrates’ Court.

On Monday (December 2) he was jailed for six weeks after a court was told it was the second time he had breached the order since being released from prison in January 2017.

Chief Inspector Steve Wykes, of Northumbria Police, has today praised the teamwork between security staff at Fenwicks and officers on patrol in the city.

He said: “Stephen Brown would not have looked out of place on Northumberland Street this weekend dressed as Santa Claus.

“There has been a fantastic atmosphere in the city in the lead up to Christmas and thousands of people were in the area doing their shopping.

“Many people would have walked by Brown and thought that it was perfectly normal for him to be offering people the chance to pose for a picture.

“But security staff at Fenwicks knew something wasn’t quite right and have contacted our officers who have checked his details and taken decisive action.

“Brown’s SOPO stated that he was not allowed any contact with children unless he had the consent of a parent or guardian who was aware of his convictions.

“We believe two people posed for a picture with him but it was clear they had no idea he was a convicted paedophile and he knew what he was doing was wrong.

“He will spend Christmas in prison and I hope that sends a strong message to both Stephen Brown, and anyone else who is subject to a similar order.”

Brown, of Fawdon Lane, Fawdon, Newcastle, was jailed for five years in July 2012 after admitting a string of child sex offences.

A court was told how a teenage girl had contacted police after an anonymous social media account had befriended her and sent a string of sexual messages.

He had encouraged her to perform sex acts and even threatened the schoolgirl when she refused to carry out his demands.

The girl bravely contacted police and officers launched an investigation to identify who the person was behind the anonymous social media account.

Police were quickly able to identify Brown as the user and he was arrested at his home. It was in a search of his home that police then discovered a number of indecent images of children.

He was arrested and convicted of 14 offences including possession of indecent images, making an indecent image and inciting a child to perform a sex act.

Anyone who has concerns about this incident can contact the Newcastle City Centre Neighbourhood Policing Team by emailing newcastlecentral.npt@northumbria.pnn.police.uk.