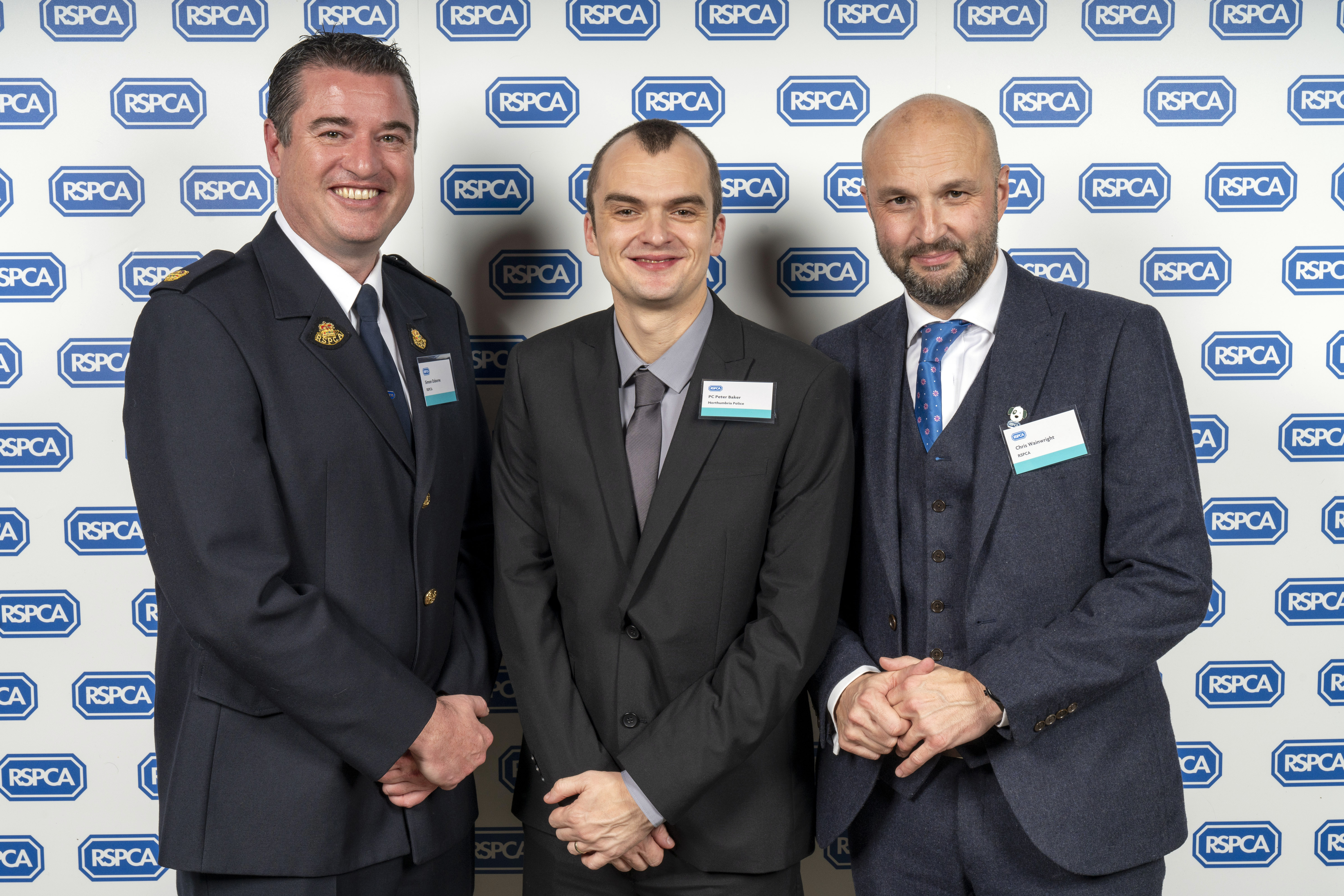 A police wildlife officer who helped bring a number of animal abusers to justice has been presented with a national award.

The Southwick-based cop, now in his 16th year of service, was nominated after RSPCA inspectors and staff highlighted the positive impact he has made on animal welfare across the North-East.

By working closely with the animal charity, the 39-year-old has managed to secure a number of convictions this year against pet owners who have neglected, mistreated or abused animals in their care.

Now, after collecting his well-deserved award at the lavish ceremony, PC Baker has vowed to continue bringing those who hurt or abuse animals to justice.

“It’s humbling to have received this award,” PC Baker said. “I’m not in this job for recognition, but because I’m an animal lover and feel strongly that anyone who threatens the welfare of animals should be punished.

“I’ve grown up always having pets – Jasper the rabbit, two stick insects called Dennis and Menace, and a dog called Kelly. I’m passionate about animals, so being a wildlife officer is my perfect job.

“I’m fortunate to work with some fantastic colleagues and I enjoy a brilliant relationship with the RSPCA, who carry out joint animal welfare visits with us at any addresses across Northumbria that they are concerned about.

“Then if a criminal offence has been committed, police can seize the animals and assist with the owner’s prosecution. Over the past few months, we’ve seen a number of high-profile convictions and that was only possible due to our effective partnership working.

“I’d like to thank those who nominated me for this award, I’m honestly over the moon, and now look forward to continuing my work over the coming months and beyond.”

Among the successful recent convictions secured by PC Baker and the RSPCA was dog breeder Lynn Stoker, 63, who was jailed for 21 weeks and banned from owning animals for life in September this year.

Stoker, of Byrness Village, Northumberland, left more than 100 animals to suffer in crowded cages and with no drinking water – with many found to have ear infections and dental issues after a warrant was executed at her address.

PC Baker also helped to secure the conviction and imprisonment of a Sunderland-based poacher who made shocking videos of his whippet brutally killing wild foxes. The 21-year-old was banned from owning animals for 10 years in April.

“He has shown great passion and dedication while carrying out his vital work, and as a Force, we will continue to ensure any owners or individuals who choose to abuse, neglect or mistreat animals are dealt with robustly.”

Northumbria Police and Crime Commissioner, Kim McGuinness, added: “We are determined to tackle crimes that cause pain and suffering to our animals and wildlife here in Northumbria and I know the public will want to join me in thanking PC Baker for his dedication to this cause.

“His work, along with that of his colleagues and partners, reinforces Northumbria Police’s commitment to preventing cruelty and getting those responsible before the courts.”

Rachel Williams, senior parliamentary advisor at the RSPCA, congratulated PC Baker and said his award is just reward following the “massive difference” he has made through his role.

She said: "PC Baker was nominated for this award by the local RSPCA inspectors in his area who praised his dedication to the animals in his patch that has seen him working with our team time and again, even on his day off and in areas that aren't part of his usual beat.

“He goes above and beyond for the animals he comes across in his job and when helping the local RSPCA team. He never complains and nothing is too big of an ask.

“I know many of the local team feel that he is one of them now and there's no doubt he's made a massive difference to how well the RSPCA in Northumbria can do their jobs, as well as to animals in the area he covers.

“We hope that this award goes some way to letting PC Baker, and everyone at Northumbria Police, know how much he's appreciated."