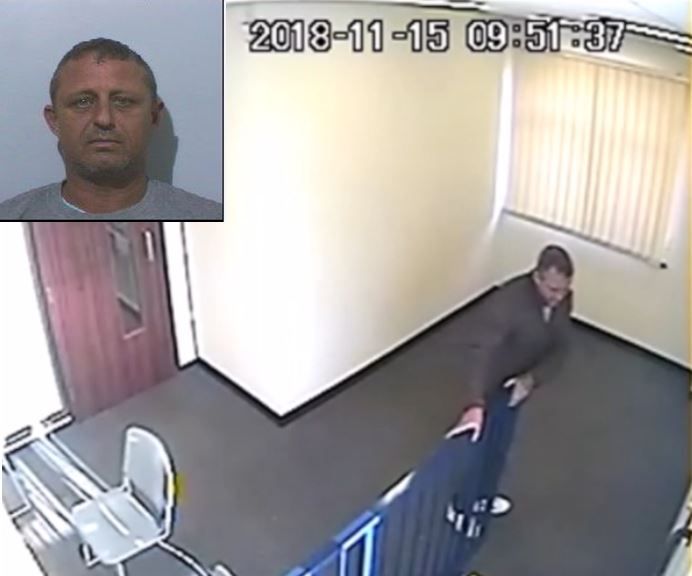 'He thought he was above the law' - fraudster jailed following £100,000 benefit scam by using false identity

A fraudster has been jailed after claiming almost £100,000 in benefits by using a false identity for five years.

Stephen Bellas, 50, admitted six fraud offences dating back to February 2013 after being found to have claimed benefits under two different names.

As part of a long-running investigation in conjunction with the Department of Work & Pensions (DWP), police finally caught Bellas who was registered to addresses in South Shields and Newbiggin under different identities.

Bellas initially refuted any wrongdoing but pleaded guilty to all offences at Newcastle Crown Court in December last year.

Yesterday (Monday), he was jailed for a total of three-and-a-half years.

Detective Constable Emma Martin, of Northumbria Police, said: “Bellas repeatedly and knowingly manipulated the benefits system over a sustained period of time for his own selfish gain.

“Over a number of years, he received a significant amount of money unlawfully in benefits. He thought he was above the law and believed he would never be caught by police.

“Throughout this investigation, he has shown a complete disregard for the law and shown little sign of remorse. He only admitted his guilt at the eleventh hour under the mounting weight of evidence against him.

“However, his deceit has now been laid bare and he must live with the consequences of his dishonest actions.

“I hope his custodial sentence today out a clear message to anybody involved in fraudulent activity across Northumbria; you will be pursued, you will be caught and you will be brought to justice.”

Bellas initially came to the attention of police in 2010 following his arrest in connection with an attempted burglary in Gateshead. However, while on bail, he seemingly dropped off the face of the Earth and avoided detection.

In February 2016, Bellas was subsequently arrested for breaching his bail conditions.

Upon arrest, he was found to be in possession of a bank card in the name of Peter Foley, who he claimed was a family member. Initial enquiries were made into Foley, but he could not be traced and no action taken as a result.

Bellas went on to receive a 12-month suspended sentence in court after pleading guilty to the attempted burglary.

A short time later, the DWP contacted police and made their own enquiries into Bellas, who they suspected was claiming benefits using two different identities.

It transpired that in February 2013, using his Foley alias, Bellas presented himself to the DWP in London and successfully applied for a national insurance number and disability benefits.

Under the name Foley, he continued to claim employment and disability benefits in the London area until he moved up to Sunderland in 2015.

In February 2016, Bellas also started claiming benefits mirroring those under the name of Foley, which roused suspicion.

Police soon discovered that numerous calls had been made to them by Bellas and Foley, who shared the same telephone number but had never been seen at the same place at the same time.

Following a two-year investigation alongside the DWP, warrants were executed at an address in South Shields and an address in Newbiggin in November 2018 where various documentation and medication were discovered under both names.

Bellas was arrested and charged with six fraud offences, but pleaded his innocence and claimed police would be “embarrassed” when he and Foley both attended court.

However, the fabricated Foley did not attend and Bellas was subsequently remanded in custody.

In December last year, Bellas, of Mozart Street, South Shields, admitted five counts of fraud by false representation and one of possessing an article used in connection with fraud on the day of his scheduled trial.

A Department for Work and Pensions spokesperson said: “Only a small minority of benefit claimants are dishonest, but cases like this show how we are catching those who cheat the system and divert taxpayers' money from the people who need it.

“We are determined to catch those we suspect of fraudulently claiming benefits by following up on tip-offs, undertaking surveillance and working with local councils.”