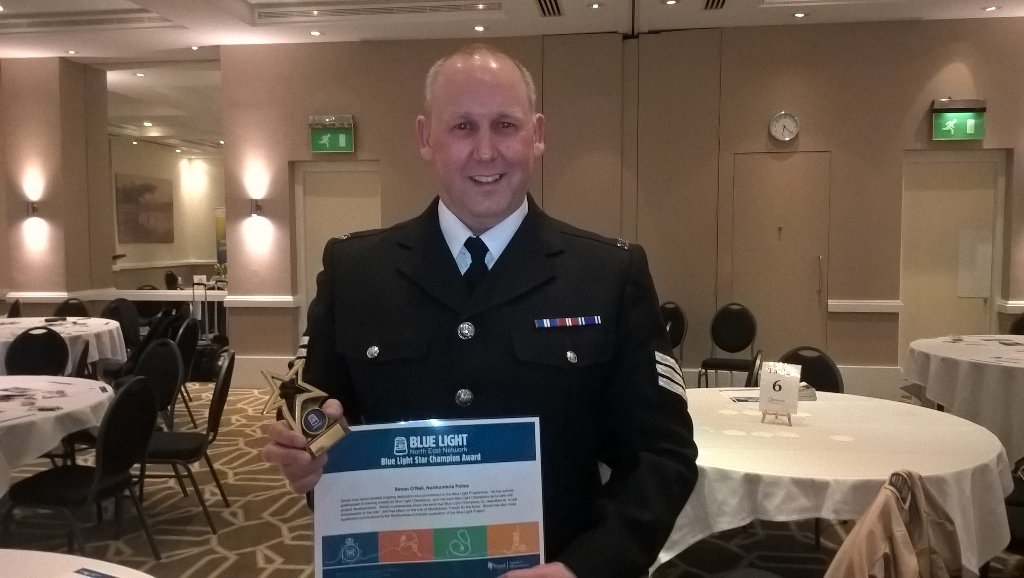 A police officer who was left with post-traumatic stress after being injured in a gas explosion hopes he can help his colleagues – by getting them talking about mental health.

Sergeant Simon O'Neill has served at Northumbria Police for 23 years in roles including a response officer, neighbourhood beat manager and an authorised firearms officer.

Now he works as a custody sergeant at Middle Engine Lane Police Station where he is responsible for the welfare of detainees.

But when Simon is not booking people into custody or charging people to court, he dedicates his time to supporting his colleagues.

In his role as one of Northumbria Police's Blue Light Champions, he has undergone training to be able to offer peer support to officers and staff.

“The Blue Light project is a massive thing for me. I had an unfortunate accident about six years ago where I ended up severely injured and ended up in hospital," said Simon.

“I had severely burnt hands, burnt lungs and, you probably wouldn’t think of it looking at me now, but the mess I was in then to be getting back fit was really trying.

“It really had a traumatic effect on me and I didn’t realise that until I was back at work. I was just tootling along like a swan, giving it big kicks.

“So when we started doing what we’re doing mental health-wise I was one of the first people they turned to because there was nothing there for me when it happened to me.

“Now they recognise these things and people are open and honest and we can talk about it. So I suppose I have worn the T-shirt so it made sense to join at the beginning of that process.

"I’m not a qualified psychiatrist but a cup of tea and conversation can go some way to allaying people’s fears."

Simon, who has spoken about mental health at a national conference in London, was working in his role as an Authorised Firearms Officer (AFO) when he suffered the injuries that left him unable to work for seven months.

He was responding to concern for an elderly male when there was a gas explosion at the property.

He was able to receive support but said the work being done to look after the welfare of officers and staff at blue light services has picked up pace in recent years.

Simon added that the demands on officers amidst tough financial constraints mean it is vitally important to look out for one another.

Simon added: "Stresses are massive these days on the organisation and we need to be able to talk to each other and we need to recognise these things when someone is not laughing and not engaging and ask ‘why not?’

“We need to actively be open and honest with them and get them back so we can hopefully prevent them from going off sick.

“Sometimes people don’t know about those pressures, they don’t hear about the human element of it, that we all have homes to go back to.

“None of us walk in in the morning and have a box that we are plugged into, we are human underneath these uniforms, we all have lives and stresses that we have to manage."

Simon's story is the latest in Northumbria Police's #ProudOfOurPeople series that looks at some of the faces behind the uniform.

If his story has got you interested in a career with the Force then you can visit the careers section of our website at http://careers.northumbria.police.uk/