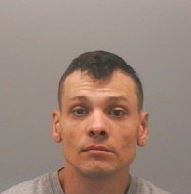 A sexual predator has been convicted of breaking in to a house in Newcastle in an attempt to sexually assault a woman he had met on a night out in the city.

Cezar-Emil Poinaru, 36, met the woman in Newcastle city centre last August as she enjoyed a night out with friends.

The 27-year-old woman had arranged to get a taxi back to a friend’s house in Heaton when Poinaru asked if he could also get a lift – falsely claiming he lived nearby.

She agreed and when they arrived at her stop she said her goodbyes, left him in the back seat and went inside the property where she fell asleep on the sofa.

But she was horrified to wake up later that evening with her pyjama trousers pulled down and Poinaru leaning over her.

The terrified woman tried to push him off her at which point he grabbed her by the throat and pushed her to the ground.

She was able to get free and lock herself in a bathroom where she waited for him to leave – but when she came out Poinaru was still there.

The brave victim was able to force the man out of the house at which point she noticed her attacker had removed the glass window pane from her back door to gain entry.

Poinaru had also taken her phone and keys upon fleeing the address – but despite this she still managed to contact police.

Officers from Northumbria Police were already on patrol in the area and just 15 minutes after the call was made they arrested a man matching the description of Poinaru.

He was found in possession of the victim's phone and key and immediately placed under arrest and taken in to police custody.

Enquiries later identified him as a suspect for a burglary at another house where he had taken cash and cigarettes while the occupants were sleeping.

Poinaru, of Hadrian Road, Newcastle, was charged with two counts of sexual assault, two counts of burglary and trespassing with intent to commit a sexual offence.

Now the sexual predator has been jailed for five-and-a-half years at the same court and made to sign the sex offenders’ register for life.

Following the case, Superintendent Peter Bent praised the bravery of the victim, not only in fighting off her attacker but also in supporting the prosecution.

He said: “I cannot even begin to imagine how terrifying it must have been for the victim in this case to wake up and see this man standing over her.

"She has been able to fight him off and she has been incredibly brave throughout all of these proceedings and has carried herself with dignity and strength.

"We are committed to ensuring the victim receives the support she needs and, while we can’t change the horrifying events of that night, I hope the fact that Cezar-Emil Poinaru has been convicted will provide her with some closure.”

Investigating officer Detective Constable Chris Sample, of the Central Burglary Team, added: “This conviction may not have been possible if it was not for the quick response of officers in the area that night.

“As soon as the call came in the control room were able to put out a description of the offender and it was a matter of minutes before he was in police custody.

“We were then quickly able to establish that he was responsible for more than one burglary in the area that night as well as the attempted sexual assault of this young woman. Newcastle is a safer place with this man behind bars.”