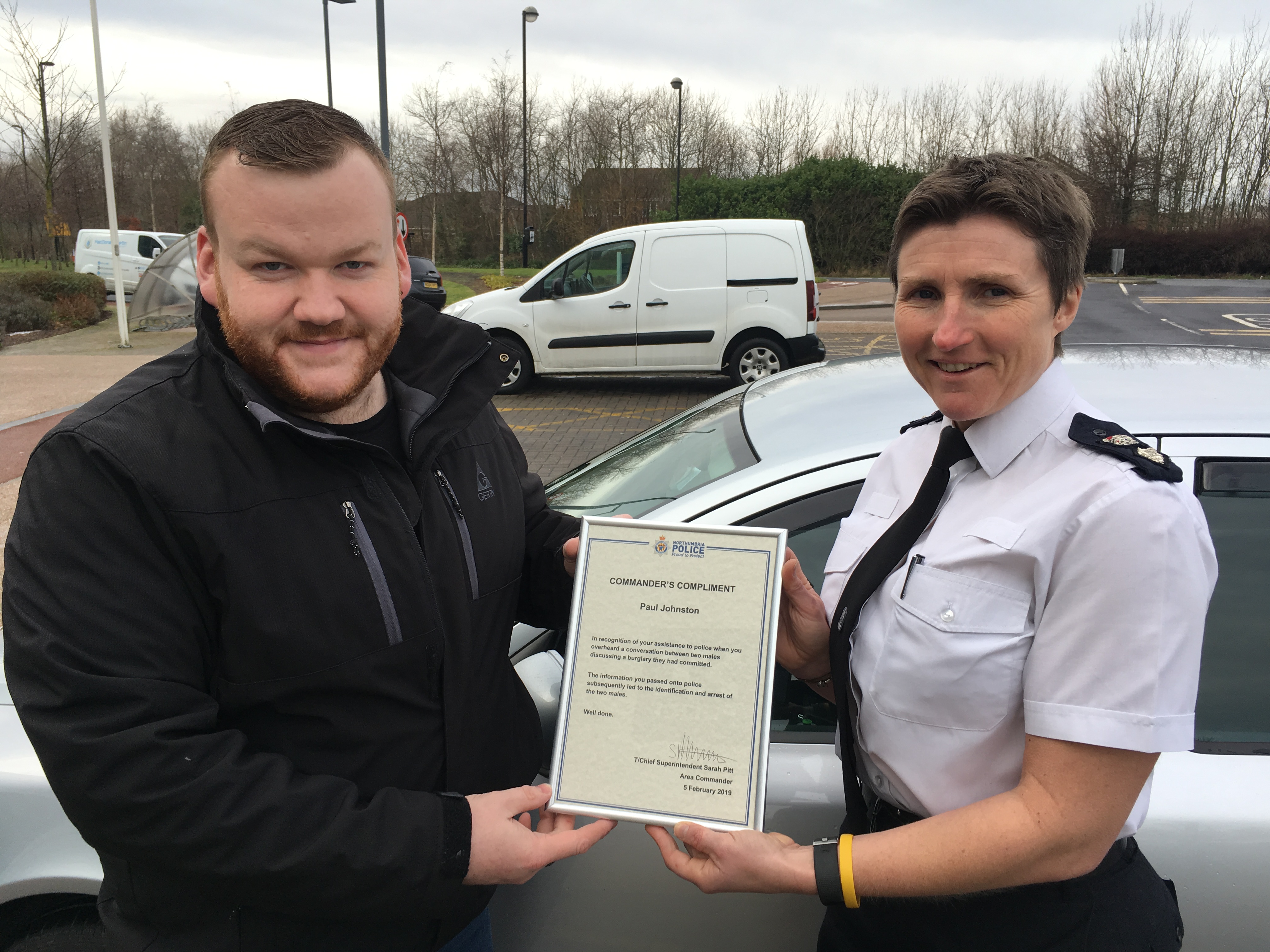 A taxi driver who reported a bragging burglar to police has been given a special commendation.

Paul Johnston, 31, picked up a teenager in the Washington area last month and began to casually chat with his passenger.

During the journey, the confident customer boasted he’d just carried out a burglary at Biddick Academy earlier that evening but claimed he “wouldn’t get caught” by police.

Mr Johnston, a taxi driver of 13 years, quizzed the passenger further and then contacted his local PC to report the surprising admission.

Two males – aged 16 and 32 – were subsequently arrested on suspicion of burglary.

This week, Chief Superintendent Sarah Pitt invited Mr Johnston into Northumbria Police’s headquarters at Middle Engine Lane, Wallsend, to present him with an award in recognition of his role in helping to identify the offenders.

“This isn’t an everyday occurrence so we thought it was important to invite Paul in and thank him personally on behalf of the Force,” said Chief Supt Pitt said.

“We work very closely with door staff and taxi drivers in order to keep the public safe and tackle crime, and this is an example of the benefits of that strong relationship.

“It would have been easy for Paul to overlook the passenger’s claims, but his willingness to do the right thing and inform police has led to a crime being solved that may have otherwise gone undetected.

“We are incredibly thankful to Paul for his support and a commendation was the least he deserved after going above and beyond.”

Police were made aware of a suspected burglary which occurred between 5.23pm and 5.30pm on January 15 at Biddick Academy, in Washington.

Offenders gained access to the school site and stole a quantity of hot chocolate, coffee and sandwiches before making off.

A few hours later, one of the individuals involved in the burglary jumped into Mr Johnston’s taxi and spoke openly about his earlier actions.

“A lad got in the car and asked if I was from Washington, which I said yes, and then asked if I’d heard that Biddick Academy had ‘got done over’,” Mr Johnston said.

“Something seemed suspicious by the way he was going on about it, so I asked whether it was him and he said yes – but claimed he wasn’t going to get caught as there wasn’t anything on CCTV.

“I’ve been a taxi driver for a while, and people chat to you about all sorts of things in the back of the cab. Nothing really surprises you – but this job stuck in my memory.

“I have family members who work in schools and children who attend them in the local area, and I know many schools are struggling financially. I thought it wouldn’t be very nice if this had happened to their school, so decided to contact police and tell them what I had been told.

“I didn’t do it for any kind of recognition, it just seemed like the right thing to do – but I really appreciated meeting Chief Superintendent Pitt and the commendation means a lot.”

A 16-year-old male is to receive a youth conditional caution and be referred to the Youth Offending Team (YOT) as a result of his actions. A 32-year-old man also received a caution.

Anyone who wishes to report a crime should contact 101, Crimestoppers anonymously on 0800 555 111 or by visiting www.northumbria.police.uk. In an emergency, ring 999.