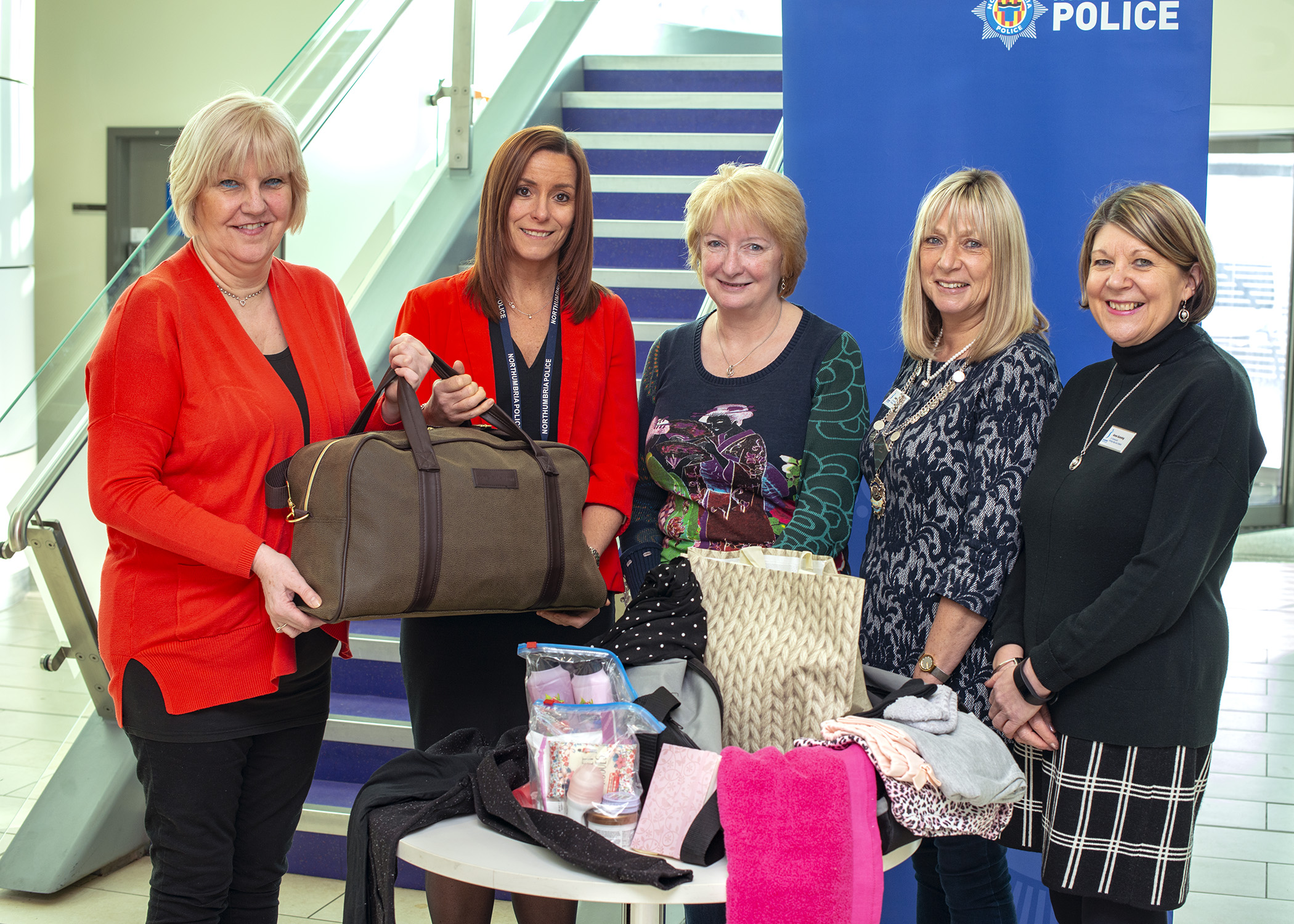 The Force has teamed up with Police and Crime Commissioner, Dame Vera Baird QC and Soroptimists International to help support victims of domestic abuse

‘Survival bags’ containing everyday essentials are being offered to victims of abusive relationships across the Northumbria Police area to help them start a new life.

The Force and Northumbria Police and Crime Commissioner are working with Soroptimists International – a charity dedicated to transforming the lives of women and girls – to help victims take that initial step and come forward.

The bags, provided by the local Soroptimists based in Newcastle, South Tyneside and North Tyneside are given to victims who have come forward to police after leaving their homes without any belongings.

This may be victims fleeing domestic or sexual abuse or victims of modern day slavery/human trafficking who have only the clothes on their backs in their possession.

Victims who come forward in the Northumbria Police force area are given a full wrap-around service of support to help provide them with the necessities they need after leaving their home.

Northumbria Police and Crime Commissioner, Dame Vera Baird QC, who is also the President of Newcastle Soroptimists, said: “What seems a simple idea can be such a welcome gesture for someone fleeing the home they share with an abusive partner. It can often be a very spur of the moment  decision – a decision of immense coverage and bravery.

“Victims are often experiencing fear and stress – taking these basic essentials is far from their mind. However, these bags are not only full of useful items but they immediately show that there are people who care. I give my full support to any initiative that helps people to leave a home of violence and abuse – this is a worthwhile project by both the Soroptimists and Northumbria Police – it is sure to make a difference to many brave victims in our area.”

Acting Superintendent Claire Wheatley, from Northumbria Police, has praised the work of the Soroptimists and believes the survival bags truly do help victims when they need it most.

She said: "The survival bags have been a huge success for us in terms of reassuring victims that they are in safe hands.

"These are victims who have so much anxiety and stress in their lives that when they do make the extremely brave decision to leave an abusive relationship, the last thing they should need to worry about is not having clean clothes, underwear, not being able to wash, not having a tampon or sanitary towel when it is needed.

"These victims can often leave home without a penny on them as many abusive partners restrict their financial access so they can't just go out and buy these things.

"Our officers and the team of partners we work with offer victims a safe environment and most importantly, allow them their dignity – often something they have been stripped of during their abusive relationship.

"We need victims to know that their safety, dignity and welfare are our absolute priority and by working with fantastic organisations such as Soroptimists International, we are able to give the best level of care to them.”

Lis Graham, from the Newcastle Branch of Soroptimist International Great Britain and Ireland (SIGBI), said: "Being in a position to support victims of abuse is fundamental to the Soroptimist organisation’s core beliefs. We work to improve the lives of women and girls at local, national and international levels. Our relationship with Northumbria Police has led to a number of joint projects which members have wholeheartedly adopted."

"Through generous donations from members, private donors, The Greggs Foundation and The Newcastle Building Society we have been able to provide 92 New Start Bags since December 2016."

"We value our working relationship with Supt Claire Wheatley and her team and are proud to support them in carrying out this vital work."

Police and Crime Commissioner Dame Vera Baird QC and Northumbria Police are also supporting Sexual Exploitation and Sexual Violence Week, which runs from Monday, February  4, to Sunday, February 10, to help raise awareness of sexual abuse and encourage victims to come forward and report to police. No one should have to suffer in silence.

Always call police on 999 in an emergency.

For more information about the work of the Soroptimists search SIGBI online or visit sigbi.org.uk