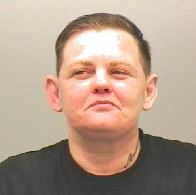 A violent thug has been convicted after asking her partner to buy a bottle of wine from a local newsagents – so she could use it as a weapon in a brutal attack on a stranger.

Nicola Mooney, 43, is facing jail after smashing the wine bottle and using it to stab a 54-year-old shopper in the shoulder and torso.

The attack took place in September last year when she walked into a chemists on the Newbiggin Hall shopping estate and ended up in an argument with John Henry Hands.

In a bid to settle the argument Mooney left the chemists, went across the road to a local newsagents and got her girlfriend to buy her a bottle of wine.

But instead of giving it to Mr Hands as a gesture of good faith, the violent thug smashed the bottle and stabbed him in the shoulder and torso in the middle of the street.

Mooney fled the area with her girlfriend, leaving shocked witnesses to tend to the victim and contact emergency services for help.

Mr Hands was taken to hospital by paramedics where he ended up having to have emergency surgery to a damaged artery and received 36 stitches.

Police were dispatched to find Mooney and within minutes she had been detained at a local park – still carrying the smashed bottle in a carrier bag.

She was due to trial at Newcastle Crown Court on Monday but instead changed her plea to guilty and now faces a lengthy spell behind bars.

Following the case, investigating officer Detective Constable Frank Cox said Mr Hands could have been killed as a result of the "brutal and unprovoked attack".

He said: "This was a brutal attack that did not take place in just one flash of anger, Nicola Mooney has gone to lengths of getting her partner to buy a bottle of wine from a nearby newsagents to use in this assault.

"The injuries she inflicted caused serious damage but the victim survived thanks to the quick actions of witnesses, paramedics and medical staff at the RVI hospital.

"It was also a fantastic response from police officers in the area who found Mooney in possession of the smashed bottle just minutes after being called.

"There was overwhelming evidence against her but she still refused to take responsibility for her actions until two days before her trial which caused a great deal of distress for her victim.

"Thankfully she did not make him stand before her in court and he has now been able to make a full recovery so he can see her brought to justice.”

In a statement following the conviction, Mr Hands said that the incident continues to haunt him nearly six months on.

He said: “The incident has left me feeling like I am not the same person. My confidence has been knocked severely. I feel like I can’t go to that chemist anymore, as I am in fear of being attacked again.

“The initial wound severed a nerve and an artery which meant that I could quite easily have died. If this had not happened near to the chemist then I truly believe that I would have died.”

Mooney, of Rose Terrace, Newcastle, was remanded in custody and will now be sentenced at Newcastle Crown Court on April 12.