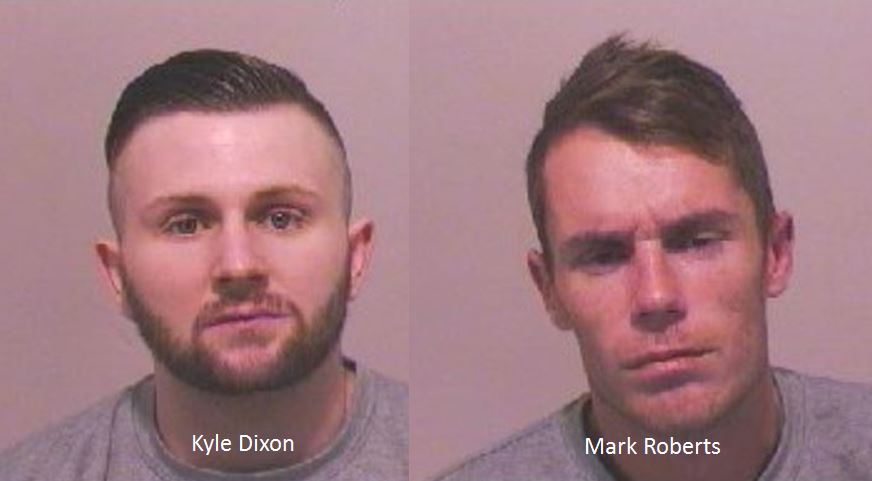 Two thugs who stabbed a man while repeatedly beating him with a dog chain have been convicted.

Kyle Dixon, 23, and Mark Roberts, 31, left their victim hospitalised as a result of the brutal assault on Hylton Road, Sunderland, in August last year.

The pair denied charges of wounding with intent to commit grievous bodily harm and possessing an offensive weapon.

But following a five-day trial at Newcastle Crown Court, yesterday (Friday) a jury found them guilty of all charges.

They are due to be sentenced later this year.

Detective Sergeant Gaye Martin, of Northumbria Police, said: “This was a despicable and cowardly assault which caused a lot of distress to the victim and the community as a whole.

“Armed with weapons caused to inflict maximum damage, Dixon and Roberts set upon their victim and left him with serious injuries that could so easily have proven fatal.

“They then had the audacity to claim the victim had wrongly identified them as the perpetrators, and showed no sign or remorse or regret following the attack. As a result, there can be no doubt that Sunderland is a safer place with these two individuals off the streets.

“I hope today’s conviction sends out a message to other criminals that this type of behaviour is totally unacceptable and we will continue to look to bring offenders to justice.”

The court was told how the victim was set upon by the pair in the early hours of August 25 last year.

Roberts stabbed the defendant multiple times while Dixon attacked him with a dog chain in the ruthless attack.

The victim required emergency surgery at hospital after sustaining multiple stab wounds to his back, chest, armpit and head.

An investigation was launched by police, who later arrested Dixon and Roberts after they were picked out by the victim in a photographic identity parade.

The attackers denied all charges claiming there had been a case of “mistaken identity”.

Dixon, of Warwick Street, Sunderland, denied wounding with intent and having an offensive weapon, namely a metal dog chain.

Roberts, of Guildford Street, Sunderland, denied wounding with intent and having an offensive weapon, namely a knife.

However, both were convicted of all charges by a jury and have been remanded in custody.

They are due to be sentenced on April 29.