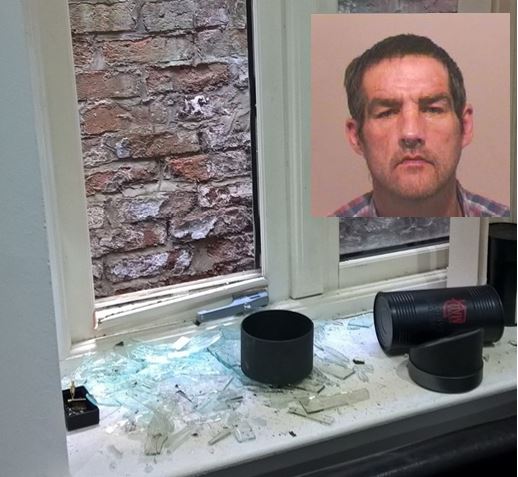 'We'll be looking to maintain this momentum into the summer': Elusive burglar jailed after community's help following public appeal

Ian Irwin, 48, was jailed for more than three years after burgling a Sunderland home in September 2018

An elusive burglar who was apprehended following a public appeal has been jailed for more than three years.

Ian Irwin, 48, smashed his way into a flat on West Sunniside, Sunderland, on September 25 last year.

He broke a window and raided the premises, making off with a number of designer watches, an Apple Macbook and a laptop with a combined value of around £2,000.

After a small sample of blood was discovered by forensic teams and later linked to Irwin, police issued a public appeal in November 2018 to locate the suspect who was believed to be sofa-surfing in the local area.

As a result of the intelligence provided, within 24 hours of the appeal, police arrested Irwin and charged him with burglary.

He pleaded guilty to burglary at Newcastle Crown Court on December 21 last year and was jailed for more than three years last Wednesday (February 13).

Detective Constable Graeme Joyce, of Northumbria Police, said: “This conviction was made possible thanks to the information that came from the public which allowed us to quickly locate Irwin and arrest him for his crimes.

“He will now spend the foreseeable future behind bars, and there can be no question that Sunderland is a safer city with this burglar in jail.

“Irwin is just one of a number of burglars who have recently been handed custodial sentences following crimes committed across Sunderland and South Tyneside, and we will be looking to maintain this momentum heading into the summer.

“Burglary is an offence that can have a lasting effect on victims and their families. As a result, we will continue to pursue offenders and ensure they have their day in court and are brought to justice for their selfish crimes.”

The court was also told that Irwin and another man were involved in a violent altercation on Norfolk Street, Sunderland, witnessed by an on-duty police officer on May 6, 2018

When confronted by the PC, Irwin then held a glass bottle in a position ready to swing and attack. He was subsequently apprehended and dropped the weapon.

Irwin was charged with a public order offence and possession of an offensive weapon, and admitted both offences at Newcastle Crown Court.

On February 13, Irwin was sentenced to three years’ jail for the burglary at West Sunniside and an additional four months for the public order offence and possessing an offensive weapon.