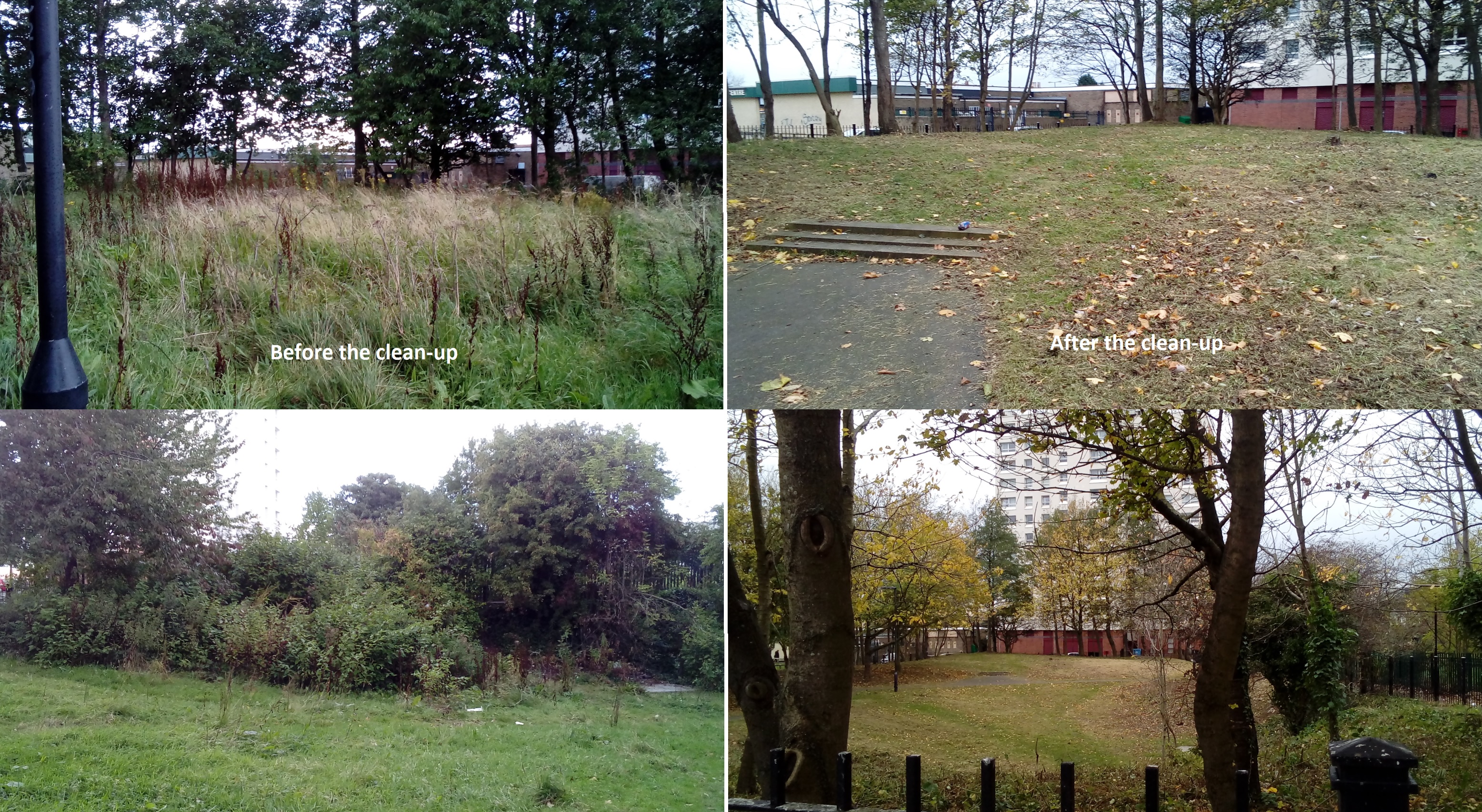 A community plagued by anti-social behaviour has seen a dramatic fall in disorder – after those responsible for crime in the area were made to tidy it up.

In the summer of 2017 the recreation ground in Blakelaw saw 36 reports of small blazes linked to teenagers drinking in the park.

That included 16 calls to Tyne and Wear Fire and Rescue Service of wheelie bins being dragged from nearby addresses and set alight.

It was also reported that teenagers were gaining access to nearby flats where they were making a mess in the hallways and intimidating residents.

Neighbourhood officers at Northumbria Police took action against those involved in the disorder but recognised the need for a long-term solution to tidy up the area.

Together with Tyne and Wear Fire and Rescue Service (TWFRS), Newcastle City Council (Our Newcastle, our great city), Your Homes Newcastle (YHN) and other partner agencies a number of new initiatives were introduced.

CCTV cameras were installed in areas targeted by repeat offenders, locks were added on wheelie bins and extra police patrols were deployed.

Youth providers also developed a number of diversionary programmes in a bid to divert teenagers away from anti-social behaviour and disorder.

And individuals convicted at court were also drafted in to help tidy up the park as part of the sentences handed to them by magistrates or a judge.

Shrubbery and trees were also cut back to prevent them being targeted by arsonists or acting as a cover for other forms of criminal activity.

Now, it has been revealed that more than a year of hard work has had a positive impact on the community - with a 53 per cent fall in reports of anti-social behaviour involving fires.

The number of calls to the fire service fell from 36 incidents between July and September in 2017 to just 17 in the same period in 2018.

It has also been revealed that there were ZERO calls about wheelie bins being set on fire this summer.

Neighbourhood Sergeant Grant Urquhart has assured residents "the work does not stop here" and added that the positive initiatives will continue in 2019.

He said: "We have been working closely with the fire service and the city council for more than a year to really change things for the better in Blakelaw.

"In 2017 we experienced real problems with anti-social behaviour that saw some residents being repeatedly targeted in the name of fun.

"Wheelie bins were set on fire, the park at the centre of the community was being destroyed and the flats were being treated as a playground.

“It was leaving some vulnerable people too scared to leave their own homes and that is completely unacceptable and needed to come to an end.

“Our officers were able to put some short-term measures in place, identify those responsible and put them before the court if it was appropriate.

"However, we were determined to put some long-term strategies in place to ensure that did not happen again and we could make a real change for local people.

“The reduction in incidents is great but the work doesn't stop here. We will keep working hard to make life even better for residents in Blakelaw."

She said: "I am delighted to see that this multi-agency approach has had a real impact this past year and that some of those involved in the anti-social behaviour have been diverted away from criminality.

"It is also great to see that some of those offenders responsible for the anti-social behaviour have even been working with the council as part of their community service to help regenerate the park.

"The figures show that there has been a big difference here already but these are long-term strategies and I hope residents in the area continue to see improvements in the city.”

Geoff Hagon, Station Manager for Newcastle Central and West Denton Fire Stations, said: “We’re really pleased to see that this joint working is making a difference to the community of Blakelaw and that these anti-social behaviour incidents including deliberate fire setting has seen a decrease.

“Not only do deliberate fires present huge risks to the perpetrators, cause damage to local properties and the environment, they also present a challenge to us.

“If we are attending deliberate fires, we are unavailable to attend other fires or emergencies. Deliberately starting fires can quickly turn into something very serious.”

The diversionary programmes introduced by youth providers included visits to the SafetyWorks! facility, football sessions with the Newcastle United Foundation and the running of the Blakelaw Centre Youth Club.

Streetwise Youth Van Sessions were also introduced for local children including a string of football tournaments and the opportunity to test some DJ decks.

Coun Habib Rahman, chair of Safe Newcastle, said: “It is pleasing to see issues that were occurring in Blakelaw and affecting the community are being tackled with a multi-agency approach to problem solving.

“It is key to resolving neighbourhood issues that partners work closely to improve the quality of life for local residents.

“The work undertaken by everyone in Blakelaw over the past year has shown the benefits of a partnership approach to tackling issues of crime and anti-social behaviour.”

Anyone who has concerns about anti-social behaviour, or who wants to report an incident to police, should call 101 or Crimestoppers anonymously on 0800 555 111.

You can also report incidents online at www.northumbria.police.uk/contact or email central.intelligence@northumbria.pnn.police.uk.

In an emergency, if a crime is in action or if person and property are at immediate risk, then always call 999.