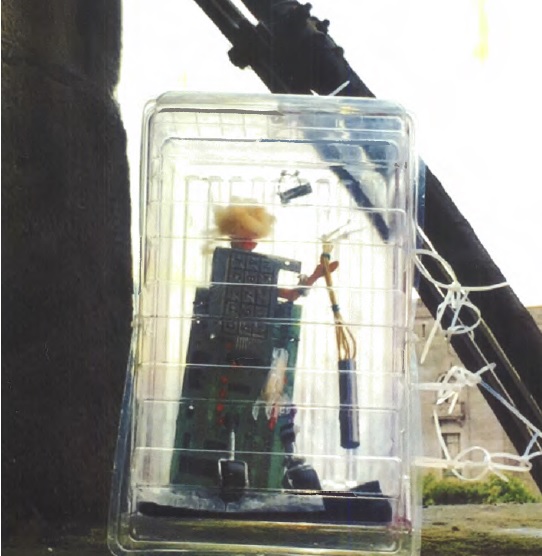 A student who sparked a major bomb scare after he installed a ‘piece of art’ on a busy city centre bridge has been ordered to 90 hours community service.

In August last year the High Level Bridge was shut to cars, trains and pedestrians after a suspected bomb was found on the walkway.

The bomb disposal unit were called to safely extract the bizarre package - a transparent lunch box fitted with wires, a circuit board and doll.

Two hours after the bridge had been shut, it was established that the item was not a viable device.

But the next day Thomas Ellison rang 999 to ask a police call handler if they could return his 'art' back to him.

Ellison, who was a student in the city, was later arrested and questioned about the hoax but he denied any wrongdoing.

The 32-year-old told detectives he had seen a similar exhibit whilst travelling in Prague and wanted to do the same in Newcastle.

At an earlier hearing at Newcastle Crown Court, Ellison, of Lynwood Avenue, Newcastle, pleaded guilty to causing a public nuisance.

Now he has been handed a six month community order ordering him to carry out 90 hours of unpaid work by a judge.

Following his conviction, Detective Constable Kim Day said it was "incomprehensible" that the student wouldn't have known the consequences of his actions.

She said: "Ellison placed what looked like a very realistic device on a major bridge just two months after the London Bridge terror attacks.

"It is incomprehensible that he would not have understood the impact his actions would have had on the immediate area.

“Not only did it cause a lot of concern among members of the public but it led to a huge response from emergency services and bomb disposal experts.

“That all comes at a cost to the taxpayer and, at best, his actions were completely irresponsible.

“If people have a burning desire to become the next Michelangelo then we would encourage them to use a bit of common sense.

“Think about the impact that it may have on the local community and seek permission from the relevant authorities if you want to display it in a public place.”

She added: “If anyone is concerned about a suspicious item then we would always encourage them to contact 999 as this could require an immediate police response.”

The device in question had been hidden behind a pillar on the High Level Bridge by Ellison.

Ellison then called police the day after the bridge had been closed but only asked a call handler if he could “have a package back” that he had left on a bridge.

He said he had erected some “art” and wanted it back from police but the call handler said that he should not call 999 believing it to be a non-emergency query about seized property.

The student then called 101 and provided further information to police who were then able to establish that he was talking about the item recovered the previous day.

Detectives were able to trace the phone box he was calling from and Ellison was then identified after his fingerprints were found on the phone.