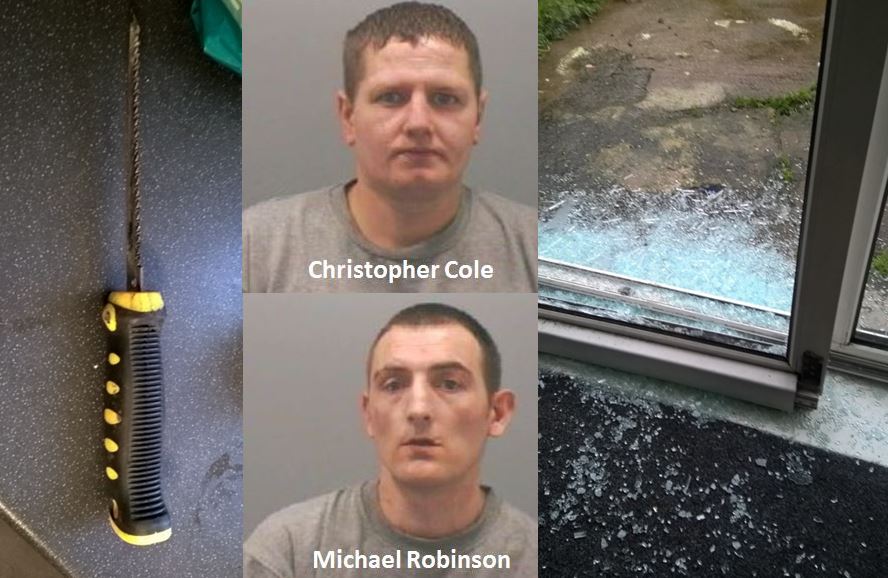 Christopher Cole, 32, and Michael Robinson, 31, have been jailed for a total of nearly ten years after the failed raid at an address on Pont Street in Ashington.

A court was told how in the early hours of December 1 last year a man confronted Cole as he tried to force open his patio door.

However, the thug then attacked the 37-year-old victim with a knife before he and Robinson forced their way into the property.

The thugs threatened the man and his partner. But they were able to disarm the pair and force them out of the address.

The shaken victims contacted police but as officers were deployed to the scene the thugs returned and threw rocks at the patio door to smash the glass and force their way inside.

Officers arrived at the scene and quickly established that Cole and Robinson had fled to a nearby property with Robinson’s dog in tow.

Robinson then set his dog on officers when they tried to arrest the pair, with the burglar encouraging the dog to bite and attack police.

The officers were able to remove the dog and place both men under arrest without sustaining any serious injury.

On May 14 both men appeared at Newcastle Crown Court and pleaded guilty to attempted robbery with Robinson also pleading guilty to affray.

And on Monday Cole, of Woodhorn Drive, Ashington, and Robinson, of Pont Street, Ashington, appeared at the same court where they were put behind bars.

Following the case, Detective Sergeant Nick Smith, one of the investigating officers from Northumbria Police, praised the bravery of the victims.

He said: “This is a great result with the sentence seeing two dangerous offenders who carried out a highly disturbing and horrific act, taken off the streets.

“The victims in this case were very brave and whilst this sentence won’t take away the stress and emotional trauma of the incident, I hope it provides them with some comfort and sense of justice.”