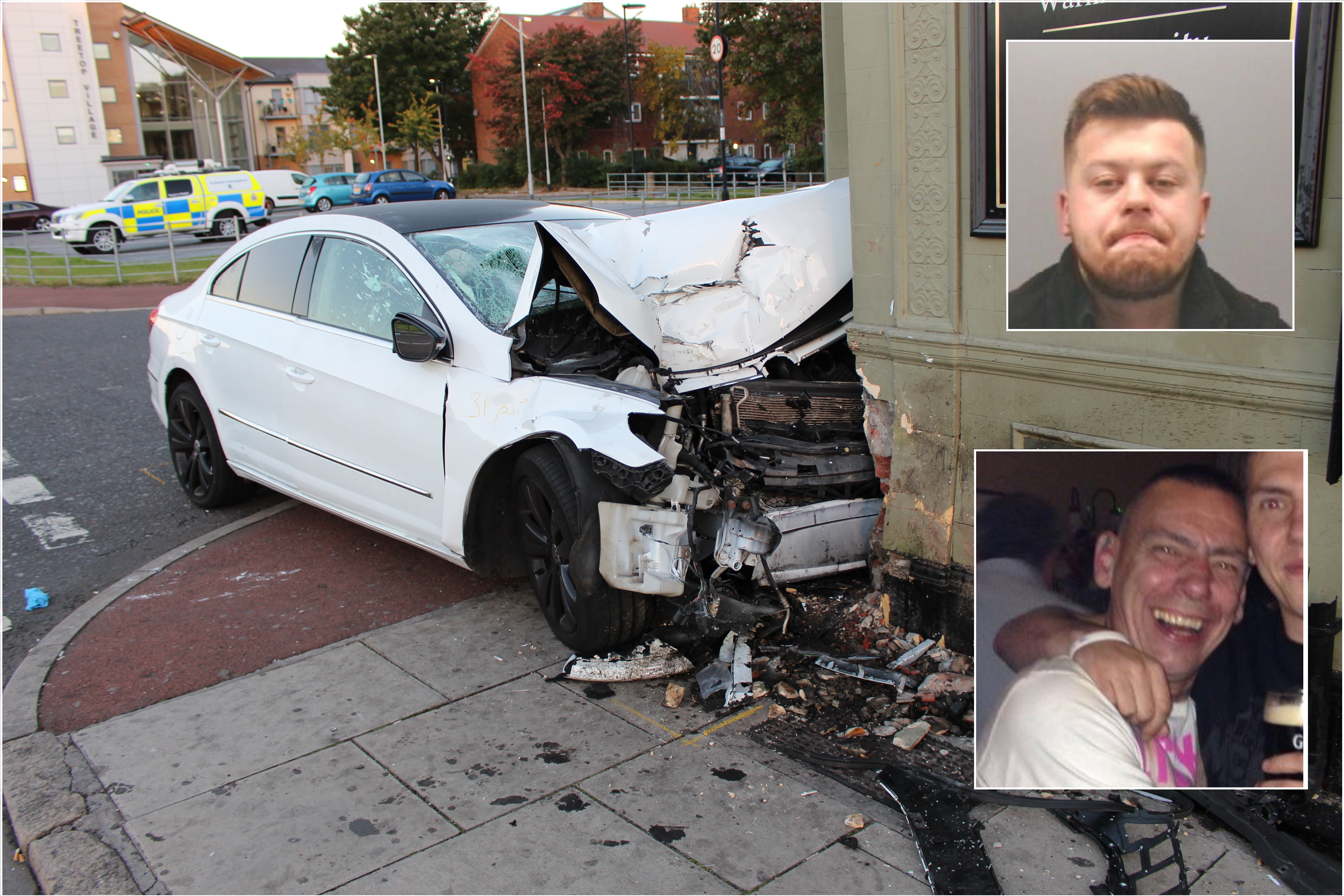 Dangerous driver who crashed into a pub, killed a father and left a young woman paralysed has been jailed

A dangerous driver who killed a pedestrian and left a young woman paralysed for the rest of her life has been jailed.

Kyle Hutchinson was over the drug driving limit when he smashed into the entrance of a pub in Newcastle in September last year.

Earlier that night the 20-year-old had been driving a white VW Passat through the west end of the city along with Luke Robinson and Shauna Kime.

Officers were on patrol in the area when they spotted the vehicle and linked it to a police incident earlier that evening.

But when police signalled for Hutchinson to stop he ignored them and slammed his foot on the accelerator.

He continued to drive at speed to avoid capture and his driving became so erratic that police had to abandon the chase.

But minutes later he lost control of his vehicle and veered off the road and into the entrance of The County on Walker Road in Walker.

Friends Paul Collinson, 54, and Christopher McShane, 59, were smoking outside when the vehicle drove straight into them and through the front door of the pub.

Both men were rushed to hospital with serious injuries along with Hutchinson and his two passengers.

Mr Collinson sadly passed away in hospital while Ms Kime, 26, suffered injuries that have left her paralysed for the rest of her life.

Mr McShane and Mr Robinson, xagex, also suffered broken bones but Hutchinson did not suffer any life-changing injuries during the collision.

Hutchinson, of Praetorian Drive, Wallsend, admitted the offences at Newcastle Crown Court in May and today he was jailed for eight years.

Following the case, Northumbria Police released CCTV of the moments before the collision and condemned the actions of the driver.

Inspector Jason Ryder said: “The devastation caused by this one man is difficult to comprehend and it is only fit that he is today behind bars.

“He has destroyed so many lives because of his own reckless actions behind the wheel and it is one of the saddest cases I have worked on.

“A family have been robbed of a loving father, a young woman has been paralysed for life and two men have suffered serious injuries they will live with forever.

“Kyle Hutchinson himself is just a young man himself but his stupidity has seen him put behind bars for the foreseeable future.

“What makes it even more difficult for the victims is that Hutchison has shown no remorse throughout the course of the investigation.

“All I can hope is that this devastating case shows what can truly happen when you get behind the wheel under the influence of drugs. Please think twice and don’t put innocent lives at risk.”

During the sentencing hearing the judge also heard a number of statements from the family of Paul Collinson and those who were left injured.

The family of dad-of-three Mr Collinson had prepared a statement to be read out during the sentencing hearing and in that they criticised him for a lack of remorse.

In the statement, his daughter said: "Our dad was a much loved, well respected, a true gentleman. He would do anything for anyone and if he was your friend you had a friend for life.

"On my birthday I was offered the last chance to see my dad but not alive and well, in the morgue before they closed his coffin two days later we buried him.

Speaking directly to Hutchinson, she said: "If you cause an accident you say sorry, you’re remorseful for your actions and try and comfort the injured party. You have shown none of that.

"Sorry wouldn’t have changed anything but a little remorse might have softened the blows, you weren’t man enough to show some empathy even after your actions robbed us of a dad and grandad.

"I pray that every night you’re locked up you think of what you have caused and one day the remorse and realisation hits you hard."

Ms Kime was a back seat passenger in the vehicle and was left paralysed after suffering serious spinal upon impact with the pub.

She had got into the car after her and her boyfriend Mr Robinson were offered a lift by Hutchinson but told police she had begged him to slow down.

In court, she said: “I was an active person, I walked everywhere and always felt I was on the go whether being at work or doing activities with my child, that has now all been ripped away from me.

“I simply went out for a night with my boyfriend and by the end of night my life had been completely torn apart at the seams all because I accepted a lift home from someone who I thought was my friend and I could trust.

“I feel like a completely different person to the one I was before that night, I feel some of my freedom has been taken away.”

As well as the custodial sentence, Hutchinson was also handed a four-year driving ban that will start upon his release from prison.

WATCH the moments before a car crashed into a Newcastle pub, killing one man and leaving a woman paralysed
Play
back to top