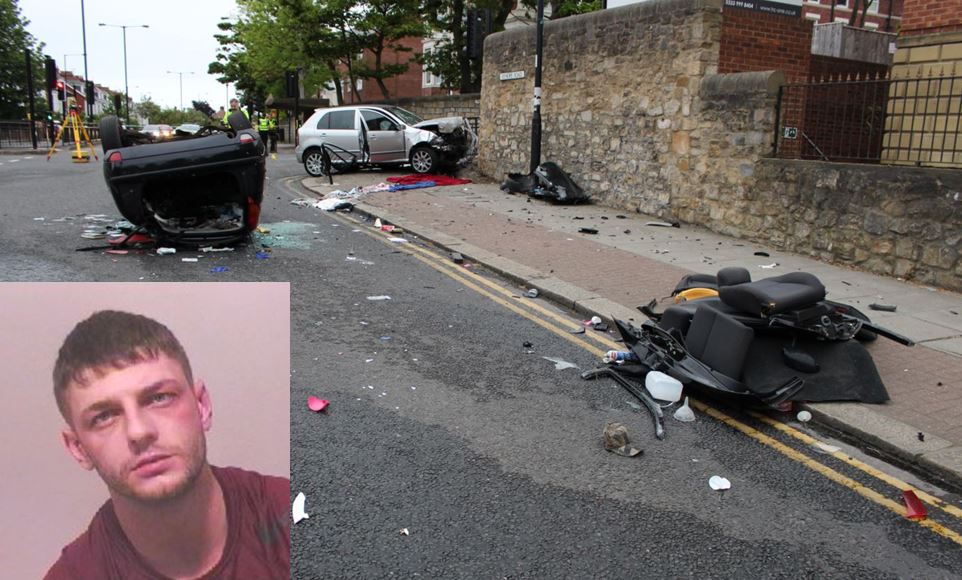 An elderly man was hospitalised for three months as a result of the actions of 25-year-old dangerous driver Mark French, who has been jailed

A dangerous driver who left a pensioner in a six-week coma after jumping a red light and smashing into his vehicle has been jailed.

Mark French, 25, caused the collision as he sped along Ryhope Road, Sunderland, on the evening of May 28, 2017.

Approaching the busy Cedars junction, French flouted the law and headed straight through a red light, before smashing into a Ford Focus which was turning right.

The driver of the Ford, aged 69 at the time of the incident, suffered life-threatening injuries which included three neck fractures, a fractured shoulder, brain damage and several internal injuries.

He was put in an induced coma for six weeks and had to undergo an emergency tracheotomy as a result of the collision, spending a total of three months in hospital.

“While the victim has gone some way to recovering physically following the collision, French’s decision to ignore a red light and travel in excess of the speed limit that day has had a profound impact on the elderly gentleman and his family.

“I would like to thank them for their cooperation and patience throughout this process, and hope this conviction can help them to seek some form of closure.

“Our roads are not race tracks and the laws are not optional. French’s actions were dangerous, erratic and wholly irresponsible.

“He has caused a significant amount of pain as a result of his behaviour behind the wheel, and now must deal with the consequences. It is clear that he cannot be trusted to use our roads in a safe and respectable manner.

“I hope today’s sentence sends out a strong message to other road users, and we will take robust action against anybody who breaks the law and endangers others while behind the wheel of a car.”

The court heard the victim – a former bus driver who had a good knowledge of the local roads – suffered several serious injuries as a result of the collision, including brain damage.

While carrying out an investigation into the collision, experts were unable to calculate the exact speed that French was travelling - but were satisfied that it was in excess of the 30mph speed limit.

In a statement read out in court, the victim said: “This collision is one of the worst things that has happened to me.

“I think back and wonder what could have happened to my wife, who was in the car with me.

“As a result of the collision, I spent almost three months in hospital. For the first six weeks, I was on life support and in a medically-induced coma. When I came around and woke up, I struggled to take in my surroundings and appreciate what had happened.

“I have come to terms with the collision and I have also accepted to a degree that I may never fully recover from my injuries. I don’t have a real malice towards the other driver; however, I want justice for what my wife and two daughters have endured.

“Their stress, anxiety and strain has been unbearable and I would like closure for them so we can get on with the rest of our lives.”

Appearing at Newcastle Crown Court today (July 19), French was jailed for 18 months and disqualified from driving for three years and nine months.