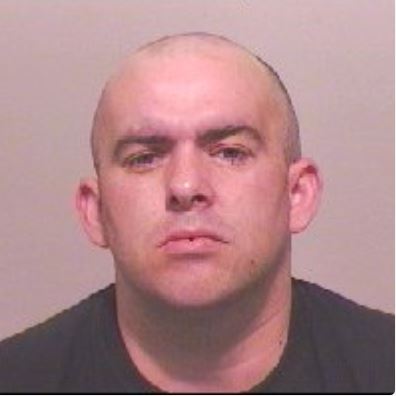 Stephen Brown, 34, also admitted occasioning grievous bodily harm on his partner and has now been sentenced for both crimes

A dangerous thug who brutally assaulted a female police officer as she tried to detain him has been jailed.

Stephen Brown, 34, repeatedly punched the on-duty officer in the face before strangling her and twisting her fingers on the afternoon of June 19.

The unprovoked attack only stopped when Brown was distracted by a member of the public, who watched in horror as the violence unfolded on Hedgeley Road, Hebburn.

Just weeks before, Brown smashed his then-partner’s head off a kitchen surface and left her with a dislocated hip during a terrifying assault.

On Friday (July 19), he was jailed for three years and four months and made subject to a 10-year restraining order forbidding him from contacting his ex-partner.

Chief Inspector Paul Walters, of Northumbria Police, said: “Our officers come to work to protect the communities they serve, and this case highlights the real risk that they can be confronted with on a daily basis.

“Officers expect to face dangerous situations, and clearly putting public safety before their own is paramount. However, when they are faced with completely unnecessary levels of violence, those who commit such offences must be dealt with robustly.

“The officer showed great courage and professionalism despite being subjected to a vicious and unprovoked attack, and I would like to commend her bravery and determination to ensure that Brown was apprehended.

“Brown is a danger to society, and at the time when he savagely attacked an officer, he was already under investigation for a domestic-related assault.

“He clearly can not be trusted to live in our community and poses a risk to the public and officers. He must now live with the consequences of his actions.”

The court heard the officer was called to Hedgeley Road on the afternoon of June 19 following a report that a man was smashing windows.

After following a suspect to Jutland Avenue, the officer was met by an incensed Brown who punched and choked her, before twisting her hand until her finger snapped as she tried to arrest him.

Fearing Brown was “trying to kill her”, the officer managed to request assistance and the attacker was subsequently arrested.

The officer was taken to hospital with multiple facial injuries and a broken finger.

In a statement read in court, the officer said: “Brown was punching me full force in the face knowing that I clearly would not be as strong as him. I believe he was trying to knock me unconscious.

“Brown then strangled me and only stopped because he was distracted by a member of the public. I fully believe at this point he intended to kill me, and this is what I feared.

“I simply do not understand why he has done all this to me when he knew he was going to be arrested – he knew I would not just walk away as I would not be doing my job.

“I refused to let go of Brown because I did not want him to get away and harm other members of the public. Brown is a very dangerous man and does not have any regard for anyone but himself.

“I don’t know how long it will take me to recover from this violent attack psychologically. I am currently quite jumpy and can’t stop thinking about the incident, feeling like I’m back there being strangled again.”

The court heard on March 1, Brown attacked his partner as she returned home having spent a period of time away whilst contemplating ending their relationship.

He proceeded to assault her by hitting her head on a kitchen work surface multiple times. She suffered a cut head and an injured hip in the attack.