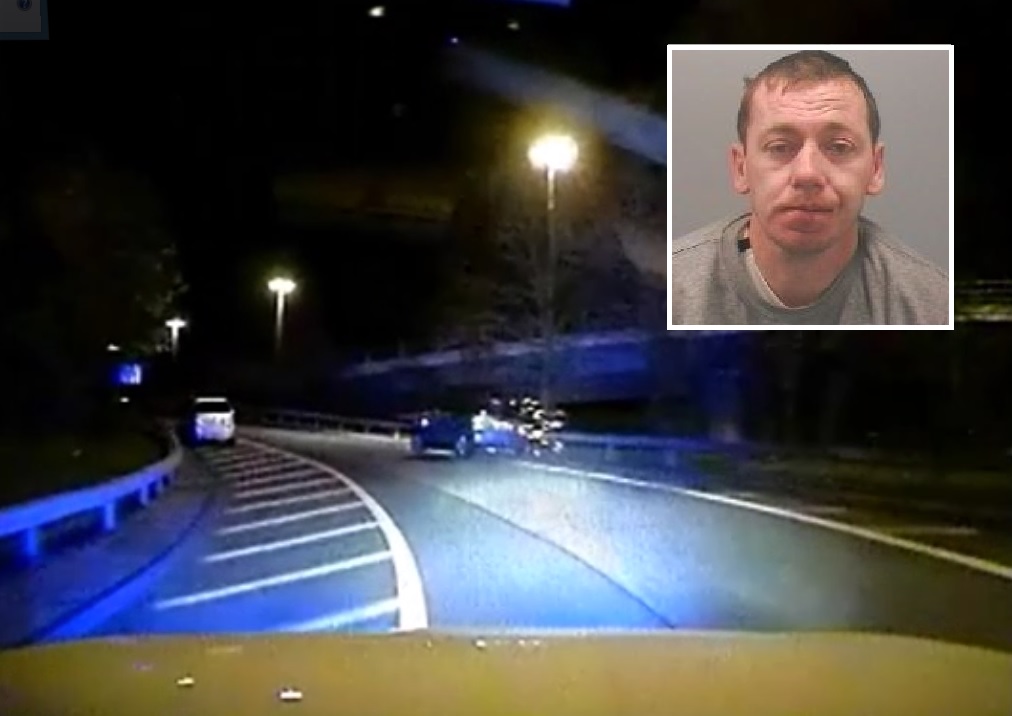 A drunk burglar has been convicted of stealing a car before he crashed it into a junction as he attempted to flee police at more than 100mph.

Brian Quinn, 40, drove on the wrong side of the road at more than double the legal limit after stealing the Mini Cooper in a burglary in Newcastle on March 24.

He had broken into a house on Turret Road in Denton Burn from which he stole the keys for the car and made off in the vehicle.

Later that night officers on patrol in Newcastle spotted the stolen vehicle driving on the Central Motorway and tried to pull him over.

But instead of stopping, Quinn, who was almost double the legal alcohol limit at the time, slammed his foot on the accelerator and made off at more than 100mph.

He then led officers on a pursuit along the Great North Road towards Gosforth, driving at more than double the 30mph and 50mph limits.

During the chase he popped one of the rear tyres but continued to drive at more than 60mph on just three wheels.

Eventually he collided with a junction on a mini roundabout at the end of Salter’s Road in Coxlodge and was arrested by police.

Quinn, of Elswick Road, Newcastle, was later charged with burglary, aggravated vehicle taking, driving with no insurance, driving whilst disqualified and driving whilst above the legal alcohol limit.

A breath test showed he had 67 micrograms of alcohol in a litre of breath – the legal limit is 35 micrograms.

And on Wednesday Quinn pleaded guilty at Newcastle Crown Court and was told by a judge he faces time behind bars.

Investigating officer DC Chris Sample said the dangerous drink-driver put lives at risk because of his reckless behaviour behind the wheel.

He said: “This burglary was committed by an opportunist thief who gained entry to a house through an unlocked door and stole some keys out of the pocket of a jacket that was hanging by the front door.

“He is a prolific criminal who knew what he was looking for and was quickly able to make off with the vehicle while the owner was still in the house.

“Thankfully, they were able to get in touch with police straight away and we were able to locate the vehicle in a matter of minutes.

“His decision to then try to escape police is one that ultimately could have cost an innocent person their life due to the erratic nature of his driving.

“He has driven at high speeds, into the direction of oncoming traffic, and then continued to drive at high speed along Gosforth High Street which is a very busy area.

“It was only due to the professionalism of those traffic officers that the pursuit was brought to a safe conclusion.

“He has been remanded in custody and will now face another spell behind bars. It gives me great satisfaction to know that for now he cannot target any other innocent members of the community.”

DC Sample is part of the Central Burglary Team, a team of dedicated burglar hunters who analyse every incident that takes place across Newcastle and Gateshead.

Quinn was remanded in custody to appear before Newcastle Crown Court at a later date when he will be sentenced for the offences.