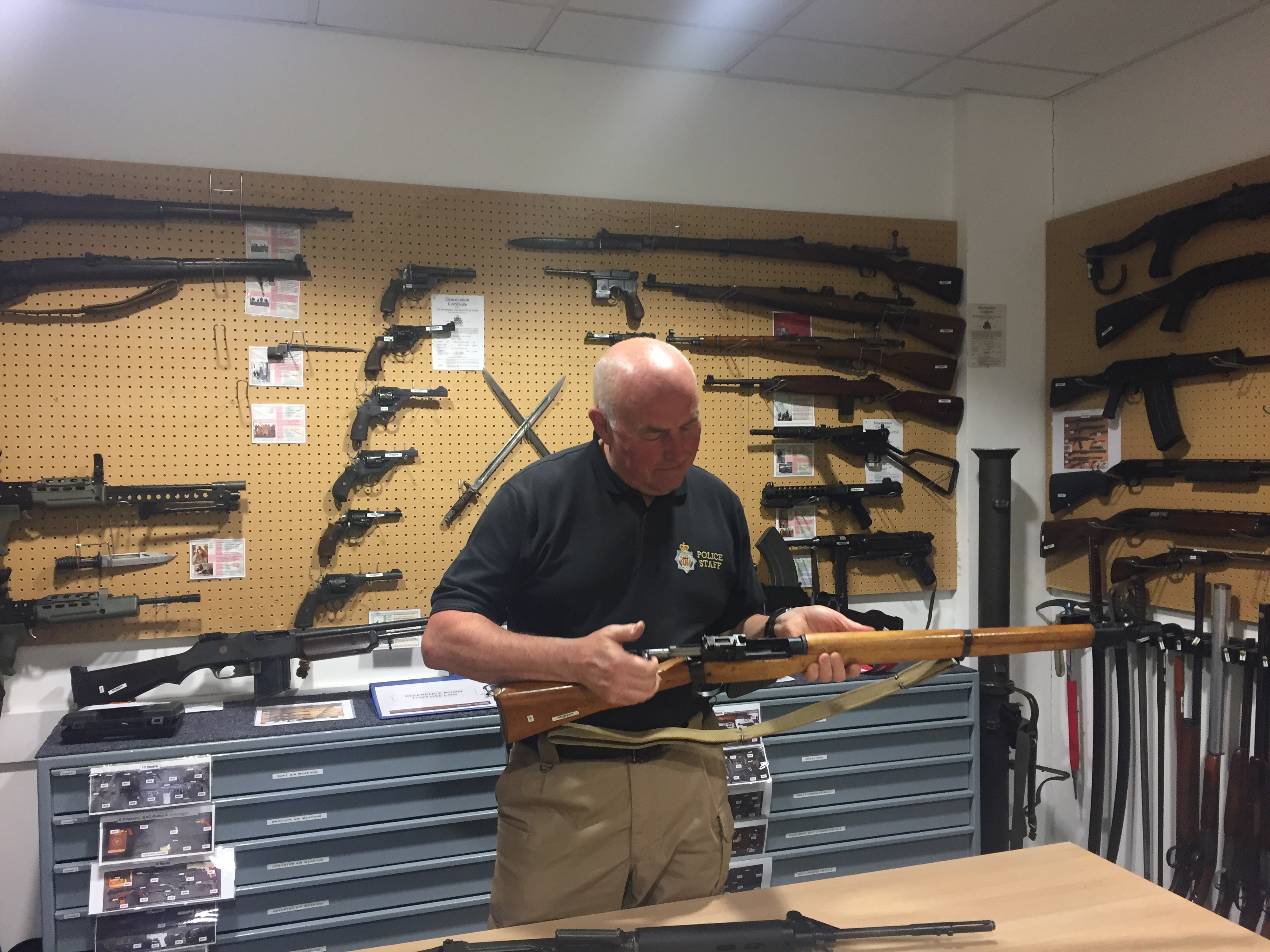 Could you tell the difference between an antique musket and an imitation? A BB gun from a shotgun? Or how about an American BAR rifle from an English Bren gun?

We know one man who can.

Meet Gary Walton, the Force armourer and the man entrusted with keeping our firearms officers’ equipment in tip-top condition and dismantling all firearms recovered during Operation Aztec, the current surrender.

Based at Follingsby our operational training centre, Gary, who has spent the majority of his 40 year career as a dedicated Authorised Firearms Officer and Instructor for Northumbria Police now spends his days in the workshop maintaining and servicing all police firearms and Tasers. He is also responsible for the dismantling and destruction of rifles, shotguns, pistols and any other firearm or prohibited weapons seized or handed into the Force and has been for the last 10 years.

Gary’s role is an integral part of Operation Aztec, the national firearms surrender which takes place between July 20 and August 4 across England, Scotland and Wales. The last surrender took part in November 2017 and saw a total of 280 weapons pass through Gary’s expert hands. Anything he sees of historic or educational value may be kept in the Force armoury or offered to museums. Everything else is sent to Gary for careful dismantling and destruction.

He said: “For anyone with an interest in firearms, it’s a great job, very interesting and you never know what you’ll find.

“Once we had a Vickers machine gun in for destruction and we offered it to the Imperial War museum. As they already had a few similar items they didn’t want this one but put us in touch with a retired brigadier who was Chairman of the regimental museums associations. Through him we contacted the Kings Own Border Regiment Museum in Carlisle who took the gun.

“Sometimes we get modified firearms which are unusual in their operation and are really good for us to keep and learn from and we use for training purposes once I’ve made them safe.

“People have no need to be worried – as a Force, a large number of the items people hand in are old rusting relics and firearms people find stored away in their homes or in the attics of relatives and they just want to get rid of them safely.”

Another part of Gary’s workload is maintaining the weapons used by the Force’s AFO’s and making sure they are fit for purpose and in immaculate condition and the former firearms instructor has to service these every 12 months, and inspect them all on a six monthly basis in between service schedules.

His in-depth knowledge comes from a lengthy career, which began back in 1979 when he was first posted to Sunderland town centre as it was then, before Washington  and then to the ARV’s and Traffic South in 1988 and in 1992 into Firearms Operations and Training.

Northumbria Police’s Assistant Chief Constable, Helen McMillan who is the national lead for the surrender praised the work which goes on during Operation Aztec within the Force.

She said: “In 2017 the national surrender achieved a fantastic set of results and as a Force, we saw almost 300 weapons handed in to our staff who were able to use their skills to examine, dismantle and then destroy them.

“The fight against gun crime is stronger than ever and we are working with partners to safeguard, educate and intervene at the earliest opportunity. We would like as many weapons as possible to be handed in over the next week and would encourage anyone who owns an unwanted firearm or who knows where one is being kept, to bring it to us.”

Once handed in, weapons will be forensically examined and then most probably destroyed or possibly offered to museums if they are any historical interest.

During the surrender period, those handing over firearms will not face prosecution for the illegal possession and they can remain anonymous at the point of surrender.

Weapons and ammunition can be surrendered at any police station but anyone handing in a firearm, ammunition or any other weapon during the surrender is advised to check the opening times of their station by calling 101 or visiting the police website.

If you know of people involved in illegal firearms call police on 101 or Crimestoppers on 0800 555.