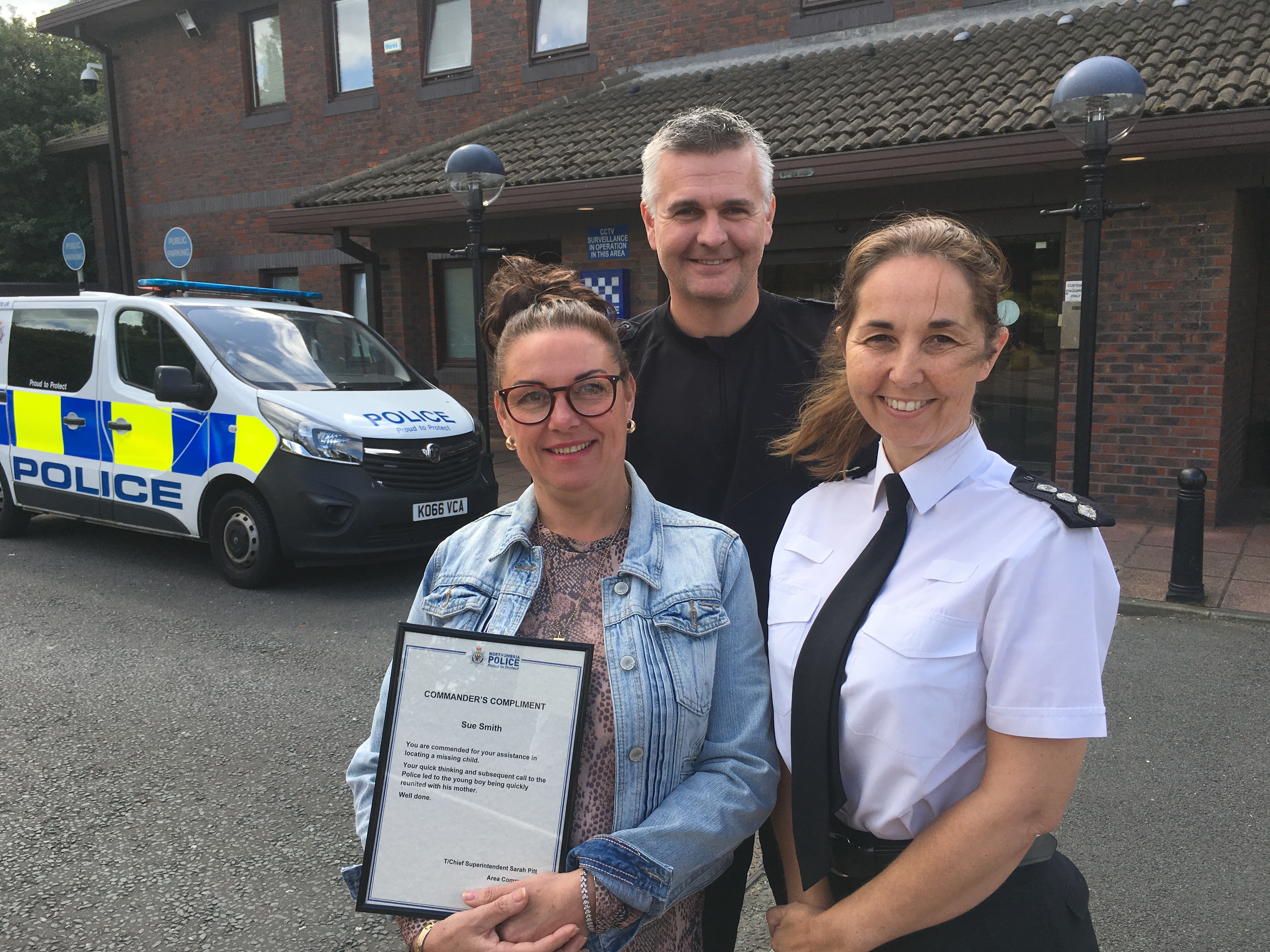 A missing person search had been launched in Sunderland for 13-year-old Layton, who has autism, before Sue Smith's instinctive actions

A Good Samaritan has been praised by police for helping to save the life of a vulnerable school boy who she found cold and alone in the North Sea.

Sue Smith, 49, was walking along the beach at Roker in Sunderland last Monday evening (June 24) when she saw a boy paddling in the water.

After asking the bare-footed youngster where his parents were, 13-year-old Layton repeatedly pointed out to sea while shivering uncontrollably due to the cold.

Concerned for his welfare and with conditions worsening, the alert adult sensed something was wrong and phoned police.

Little did she know, a huge search operation was ongoing to try and find Layton, who has autism and had been reported missing two hours earlier from the Hylton Castle area of the city.

The vulnerable youngster was later reunited with his emotional mum, who admitted she was “sick with worry” after her son had disappeared shortly after 4.30pm.

“He was riding his scooter with his grandma going to the shops, when all of a sudden, he just vanished,” mum Mary Cowley said.

“We didn’t think he will have gone far, but as we searched for him and time dragged on, I began to feel sick – I began to fear something serious had happened.

“I just couldn’t believe it when they said he’d been found down on the beach in Roker. We’ve never been down there before on foot – he must have remembered the route while we were on the bus or something.

“He loves the sea, but we’d have never guessed that he’d have been able to travel that distance alone. The whole family were sick with worry, we just didn’t know what to do.

“I can’t thank Sue enough for what she did. She saved my son’s life – and it doesn’t bare thinking about what might have happened had she not have seen something wasn’t quite right, and called the police.”

In recognition of her swift actions that helped reunite Layton with his family, Sunderland College lecturer Sue was invited into Southwick Police Station this week (Tuesday) to meet with Mary and her family.

There, Sue was presented with a Commander’s Compliment and was greeted by Chief Inspector Sam Rennison and Inspector Steve Prested who thanked her for quick-thinking heroics.

“I just knew something wasn’t right,” said Sue, who lives near the Roker seafront. “My husband and I were walking along the beach and saw this young lad who wasn’t wearing any shoes and had dropped some items of clothing in the water.

“The sea was rough, it wasn’t very warm, so I looked around and didn’t see anybody with him. When I went over and asked where his parents were, he pointed out to the sea – and I recognised that he might need help.

“I’m so relieved that Layton was safely reunited with his family. It was wonderful to meet his mother in the police station, and I’m blown away by this commendation – I just did what anybody would have done.”

Chief Inspector Sam Rennison, of Northumbria Police, praised Sue’s actions and has urged others to similarly act on their instincts heading into the summer months.

“This could have so easily been a different outcome, and we are all indebted to Sue for what she did that day,” Ch Insp Rennison said.

“It would have been very easy to just walk on and ignore what she had seen. However, by recognising something did not seem right and contacting police, she has reunited a young teenager with his loving family. She should be incredibly proud of what she has done.

“As a Force, we are committed to protecting the most vulnerable in our communities – but this shows that we also need the public’s help to provide information and raise the alarm when they see anything unusual or suspicious.

“Heading into the summer, we anticipate that more families will be enjoying the sunshine and enjoying the region’s many beaches and picturesque coast-lines, and our message is simple – please, if you are not sure or see anything that rouses suspicion, please give us a call.”