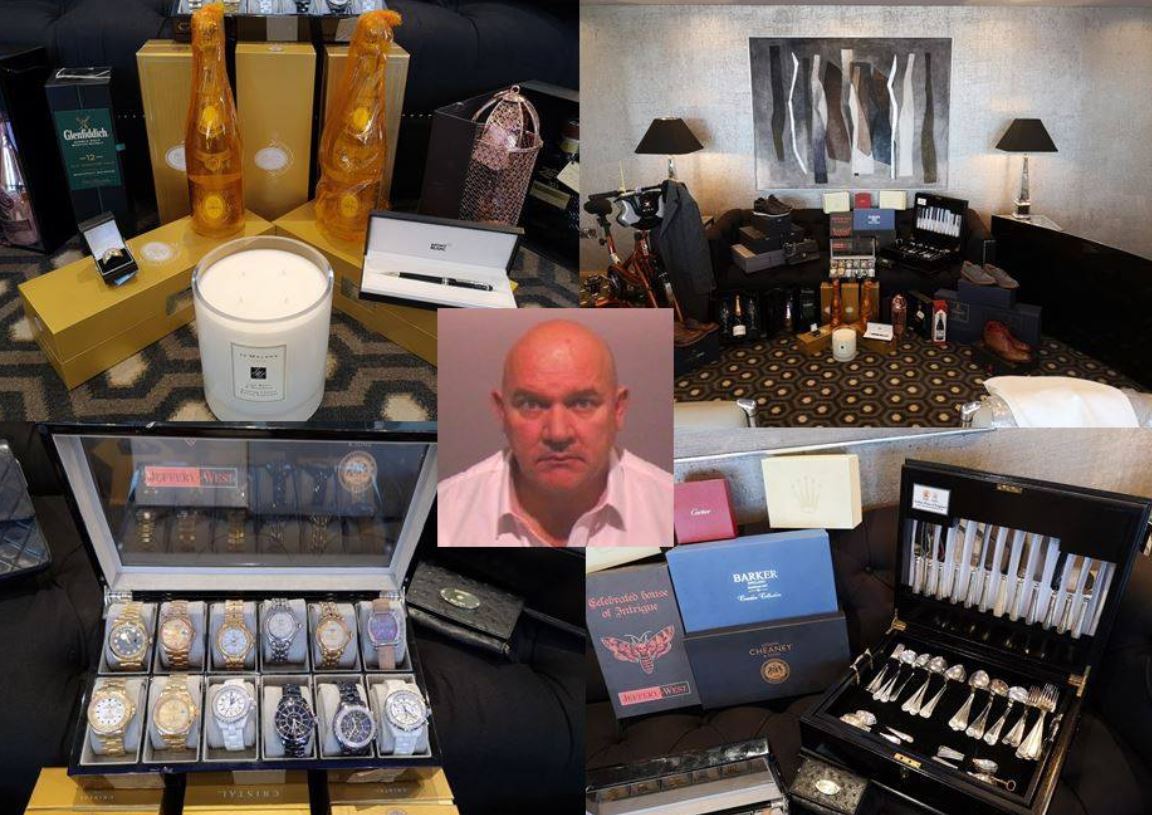 A man has had his luxury items seized by police as part of a financial investigation – after he pocketed £6 million in tax evasion.

Stanley Leslie Miller, was jailed earlier this year after he was found guilty of four counts of tax evasion, has lost cases of Cristal, Rolex watches and a haul of designer goods worth more than £237,000 after officers swooped in on his Gateshead home.

A search of the 58-year-old’s home in Lane head, Ryton led to the seizure of 53 lavish items ranging from state-of-the-art electricals to expensive sports equipment being seized under the powers of the Proceeds of Crime Act.

They have now been valued by an independent auction house and will not be returned to the convicted fraudster. If he does not consent to the sale, it will be ordered by the courts once a Proceeds of Crime order has been granted against him.
Prior to Miller’s conviction, £3.5 million worth of assets were identified and frozen by officers who subjected him to a financial restraint order.

However, the devious conman tried to dupe authorities by ignoring the order and attempting to move £50,000 into a Dubai-based account landing himself with a six month custodial sentence for contempt of court in 2018.

Detective Sergeant Tommy Maughan from the NE RART said: “Thanks to the Proceeds of Crime Act, we are given another opportunity to pursue individuals who are using crime to fund their lavish lifestyles.

“We can continue to go after people who have been brought before the courts and freeze their assets such as houses and bank accounts.

"We can also seize items of worth, making sure they're sold with the proceeds going towards paying for any subsequent court orders.

“This prevents items from being hidden, sold or otherwise lost by the convicted person and therefore paying less towards the value of their offending.

“We know that for some offenders, prison is not much of a deterrent as they can come back to their luxury home and their new car – but not now.

“Our role is to seize anything which has links to their criminal activities and make sure victims of fraud are fully reimbursed.

“Miller has repeatedly shown a blatant disregard for the law and continued to breach restrictions placed on him.

“He has deliberately tried to hide funds from us so he can continue his luxury lifestyle once released from prison but we are here to put a stop to that and make sure his criminal ways definitely do not pay.”

Cheryl Burr, Assistant Director, Fraud Investigation Service, HMRC, said: “Thanks to collaboration between NE RART and HMRC, Miller is not only behind bars but he has been stripped of his assets, denying him the proceeds of his attack on British taxpayers.

“HMRC will pursue criminals who steal money from the public purse and we ask anyone with information about suspected tax fraud to report it to HMRC online, or call our Fraud Hotline on 0800 788 887.”

Miller was sentenced to a total of eight years and three months imprisonment on February 1 for three counts of VAT evasion and one count of failing to pay HMRC the required National Insurance and Income Tax deductions between 06/04/2009 – 08/05/2016 to total value of £5,952,418.16.