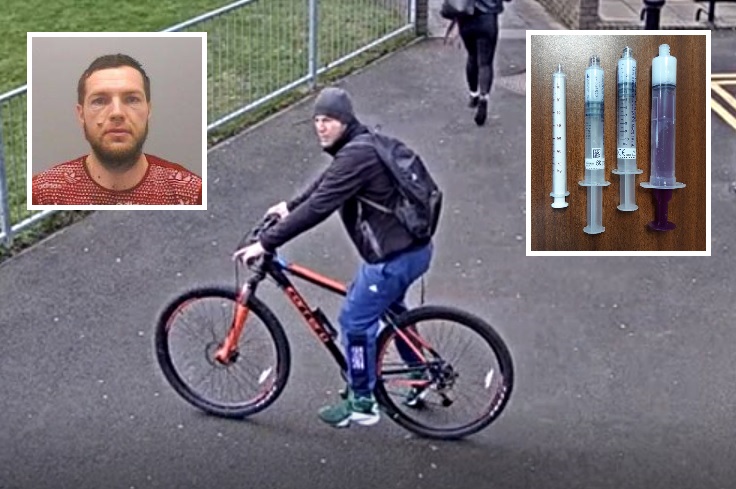 A sexual predator who cycled around Newcastle and squirted young women with white liquid has been put on the sex offenders register for five years.

A court heard how the 29-year-old had stuffed a rucksack full of syringes filled with what was actually white hand wash.

He would then cycle around the city centre and squeeze the liquid on to women, most of whom were university students.

Many of the victims were not even aware they had been targeted until they later found the substance on their clothing.

It left some terrified they had been targeted with acid while others thought the strange substance may have been sperm.

In total the sexual predator targeted 11 women in just one week with nine of the offences taking place on the same day.

Police launched an investigation and were able to identify Trifan as the offender through CCTV enquiries in the city.

Officers searched his Fenham home and found the rucksack full of the syringes he had used to carry out the attacks.

In police interview he admitted that he had committed the offences for "sexual gratification".

He was charged with 11 counts of sexual assault and has already spent the equivalent of an eight month prison sentence on remand.

Trifan, of Dilston Road, Fenham, appeared at Newcastle Crown Court on Friday where he was told he would have to sign the sex offenders register for five years.

However, as he had already spent four months behind bars he was not given a custodial sentence by the judge.

Instead he was handed a 12-month community order and a restraining order that banned him from carrying syringes in public.

Following the case, the police officer in charge of policing in Newcastle city centre said his victims were made to feel "violated".

Inspector Louise Jenkins said: "This is one of the more bizarre cases we have dealt with but it has had a massive impact on these young women.

"It must have been really scary for them to find this strange liquid on their clothing and they would obviously be thinking the worst in that moment.

"This offending has made them feel violated and traumatised because they have been targeted for this man's sexual gratification.

"Nobody should be scared to walk through our city centre and we were determined to identify this offender and put him before the courts.

"He has spent time behind bars and will now be made to sign the sex offenders' register for five years.

"A restraining order can also help bring further comfort to those young women targeted by this sexual predator."

The court heard that Trifan was otherwise of "positive good character" and worked in the UK to send money back to his family in Romania.