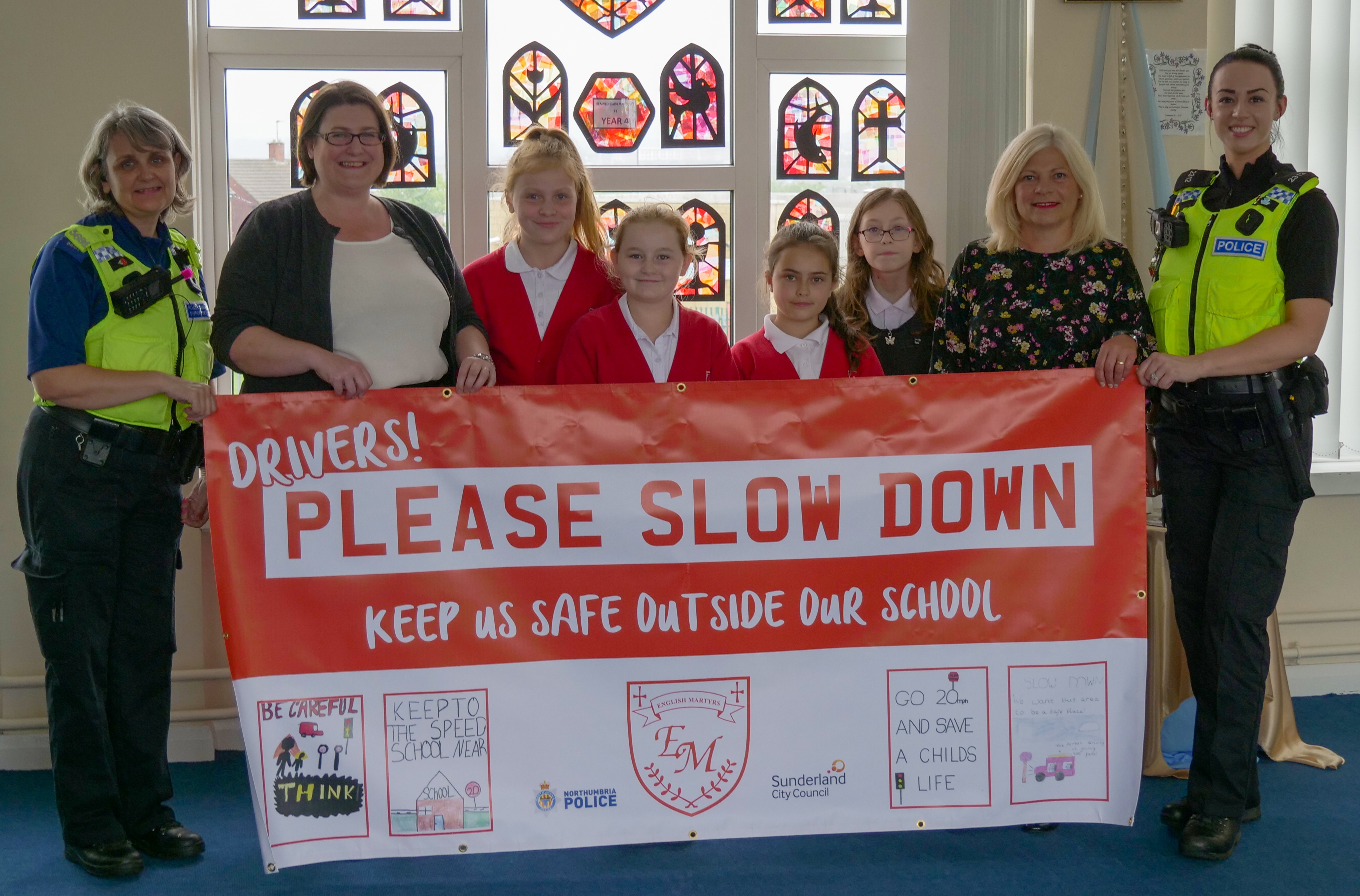 An eye-catching banner has been unveiled outside a Sunderland school after pupils joined forces with police to tackle speeding motorists.

In January, officers launched a new initiative in partnership with English Martyrs School and Sunderland City Council to encourage drivers to slow down on Redcar Road – which has resulted in plans to reduce the speed limit.

The initiative followed concerns raised by residents, parents and staff that motorists were putting the lives of children at risk by flouting the 30mph limit and speeding past the Southwick school.

PC Louise Turnbull visited the school and showed pupils how to use the speed guns as part of a road safety session – and the children then put the equipment to the test at the roadside.

Students were also asked to design a roadside poster that can be used to warn motorists of the danger speed poses and encourage them to slow down.

A giant banner showing four of the best designs has now been fastened to the railings outside the school, along with a clear message to passing drivers – ‘please slow down’.

PC Turnbull said: “The road safety project really captured the students’ imagination and we have received a lot of support from staff and residents since we ran the initiative earlier this year.

“We’re pleased that the message has been heard loud and clear. The campaign has helped to raise awareness and educate drivers that speeding – even by a few miles per hour - can pose a significant risk to the children and staff at the school.

“Redcar Road is relatively straight, so some motorists may think it’s safe to drive at a quicker speed. But this is a busy area, there are a lot of pedestrians crossing the road – and many of those are young people going to and from the school.

“Hopefully the new banner outside the school gates will continue to reiterate this important message, and we will continue to work closely with English Martyrs School and Sunderland City Council to keep children safe and reduce the risk of a potentially disastrous incident.”

The council has now agreed for a 20mph speed limit to be implemented, while further measures including improved marking and speed cushions could be considered in the future.

“The most important thing is the safety of the children who attend this school and live in the local area, and that’s why this fantastic initiative with police and the school started earlier this year,” Cllr Samuels said.

“It was a pleasure to look at all the posters designed by the children and pick out the winners, which now form part of the giant banner outside the school gates as a reminder to motorists.

“We are also pleased that the speed limit will be reduced to 20mph and hope it can have a big impact in making the road safer.”

Paula Cornell, headteacher at English Martyrs School, welcomed the developments and thanked police for the initiative which helped place the issue at the forefront of people’s minds.

“The safety of our pupils is paramount,” she said. “We all have a role to play in ensuring our young children are kept safe, and this initiative has certainly helped to ensure that message is heard.

“It was important to work with the police and the council to educate our children about road safety, but also to urge drivers to think of the potential consequences of driving too fast.

“The children have loved working with the police on this project, and we all look forward to building on that strong relationship over the coming months.”