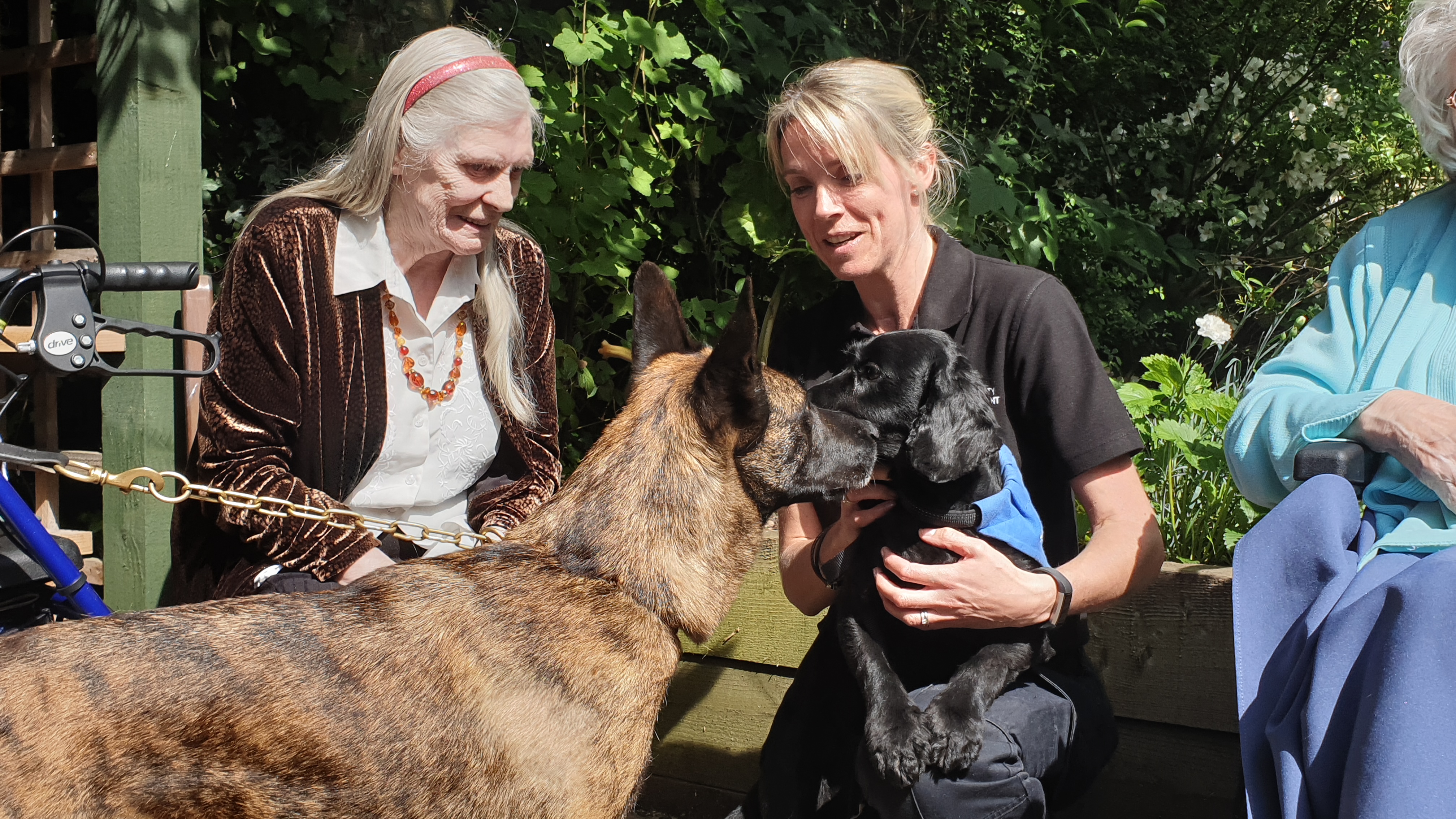 A trio of police dogs have paid a visit to residents of a Newcastle care home - after officers this week joined a scheme to help find vulnerable people who go missing.

Residents at Ferguson Lodge in Old Benwell Village used to receive regular visits from a therapy dog that was often the highlight of their week.

But they were left saddened when the charity who supplied the dog could no longer bring a pooch along to the care home on Ferguson's Lane.

After hearing about the situation, Northumbria Police's Dog Section got in touch with the care home to see if they could bring their dogs down.

They wanted to help bring a bit of happiness to residents but they also wanted to use it as an opportunity to talk to them about the Herbert Protocol.

That is the new scheme Northumbria Police signed up to this week which sees families of people with dementia fill in a brand new form.

The form is designed to tell police more about the individual so, if they ever go missing, police will have details to hand that could be crucial in the search for them.

Northumbria Police have launched the Herbert Protocol in the same week as their vulnerability campaign and it follows the release of a bold social experiment on Monday.
A video with a man acting as someone with dementia in Newcastle city centre has been viewed nearly 200,000 times on social media.

Sergeant Andrew Whittle, who helped introduce the Herbert Protocol in the Northumbria force area, said the video reinforces the importance of the scheme.

He said: "The social experiment video was fantastic and it really underlines why it is so important to have something like this in place.

“It is not uncommon for people with dementia to become confused, leave their homes and then they get lost.

"We have had cases of elderly people getting on public transport and travelling hundreds of miles and this can be terrifying.

"in the early stages of those incidents we will take time to sit down with families and find out a bit more about the person that could help us find them.

"That could be details about where they grew up, where their wider family live, a memorable place for them or the route they used to take to work.

"This form will contain all that information and could save vital time in the early stages of an investigation to help bring the person home safely."

Chief Constable Winton Keenen is also a big supporter of the Herbert Protocol and said he is delighted to see it rolled out in the Force.

He said: "It is imperative we all understand what vulnerability can look like in day-to-day life and, more importantly, how we can all do our bit to help.

"The issues raised as part of our ‘Social Experiment’ underline how important it is that we are now signed up to the Herbert Protocol in our Force area.

"This scheme is about giving our officers more tools to be able to find these individuals fit and well before they find themselves in real danger.

"I am delighted to see it being rolled out in our Force area and I am glad the residents at Ferguson's Lodge enjoyed the visit from our Dog Section.

"We were able to put a smile on peoples' faces but we were also able to deliver an important message about what the scheme means for members of the public.”

Northumbria Police and Crime Commissioner Kim McGuinness added: “I am born and raised in the North East and know what a friendly community we are.

"The social experiment video epitomised everything that we love about North Easterners and has made people think twice about what vulnerability means and that it is not always visible.

“I am a big supporter of the Herbert Protocol and know through my early conversations as Police and Crime Commissioner how hard officers have been working to introduce it in our region.

“Safeguarding is everybody’s business and the scheme is something that I will promote when I am out and about meeting local residents.”

Ferguson Lodge, based on Ferguson Lane in Old Benwell Village, have also since introduced the Herbert Protocol form as part of their registration process so the families of all residents will now have to fill it in.

The Herbert Protocol was launched in the Force area on Monday but it is a multi-agency scheme that includes a number of significant partners.

All six local authorities have signed up, as have Tyne and Wear Fire and Rescue Service, the North East Ambulance Service, Dementia UK and the Alzheimer’s Society.

Information about the Herbert Protocol can be found on the Northumbria Police website alongside details of how to sign up and a downloadable form you can fill in - https://beta.northumbria.police.uk/advice-and-info/personal-safety/missing-persons/