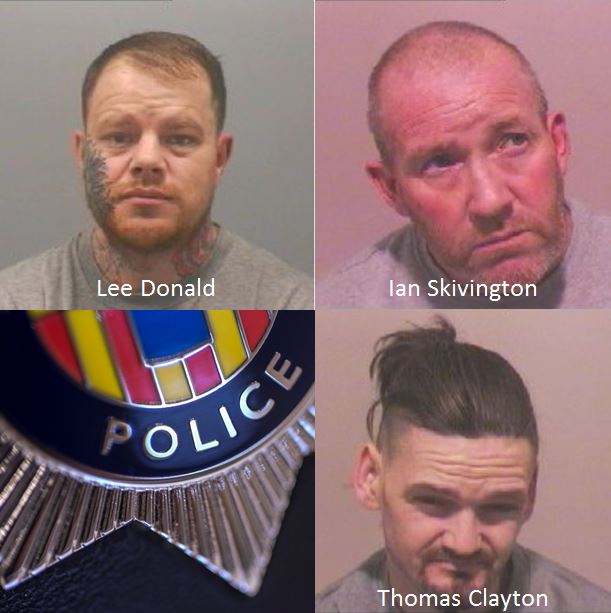 Lee Donald, 40, and Ian Skivington, 52, both admitted aggravated burglary and were each jailed for seven years and eight months

Ruthless raiders who conned a homeowner before stealing nearly £20,000 from his home have been jailed.

Lee Donald, 40, and Ian Skivington, 52, both targeted an address on Thirkeld Place, Penshaw, on the evening of November 26 last year.

Shortly after returning home from work, the 70-year-old victim was tricked by one of the burglars who posed as a delivery driver and asked whether he’d take in a parcel for a neighbour.

After allowing him into the property, the occupant was pushed to the floor before two other men  - both of whom were wearing masks - entered.

The victim was ordered to hand over bundles of cash at knifepoint, as one offender threatened to cut off his hand if he did not bow to their demands. The gang made off with a stash of notes along with a number of expensive watches.

Donald, of Rowantree Road, Newcastle, and Skivington, of Thornhill Road, Ponteland, both pleaded guilty to aggravated burglary. On Friday (June 28), they were both jailed for seven years and eight months at Newcastle Crown Court.

Detective Sergeant Andrew Richardson, of Northumbria Police, said: “This was a despicable crime which saw three men target an innocent member of the public and steal his hard-earned money.

“One of the burglars posed as a delivery driver to gain access to the property, and after conning his victim, he was then joined by two others who frightened and intimidated their target into submission.

“I would like to praise the victim who showed incredible bravery and cooperation throughout this case, after he was subjected to a such a terrifying ordeal.

“The offenders showed no remorse or regret for their actions, and Skivington was even arrested by officers as he attempted to board a flight in Manchester to leave the country.

“There is no place for individuals like these in society, and we are committed to ensuring those who undermine the fabric of our communities and prey on others for their own selfish gain are brought to justice.

“We will continue to take robust action against burglars and will use every resource available to make sure offenders are taken off the streets.”

The court heard the victim was hit in the face with the handle of a knife, which had a 14-inch blade, and was warned his hand would be chopped off by one offender if he did not hand over his money.

The offenders pocketed £4,000 cash from an upstairs room, along with a number of expensive watches, before the victim was coerced into showing where a further £15,000 was hidden under floorboards.

In a statement read out in court, the victim said his “life has been changed forever” as a result of the attack.

“I consider myself a resilient, vibrant and energetic man who has overcome many hurdles in my life,” the victim said. “But this unprovoked attack has had a profound impact on my mental health and overall wellbeing.

“To be held up at knife-point by three men in my own home is an intensely terrifying thing to happen. To this day, I still have vivid flashbacks of the attackers coming towards me, one with the knife poised ready to cut me.

“Financially, this attack has had a significant impact. The defendants took £20,000 in cash, This was money I had worked incredibly hard to save for my retirement.

“They also stole several antique and collectible watches which had sentimental value for me, having collected them over many years and treasured them. I looked forward to handing these down to my son. Knowing they were being worn by criminals was heart-breaking and felt like a personal violation.”

The three defendants all now begin a stretch behind bars.