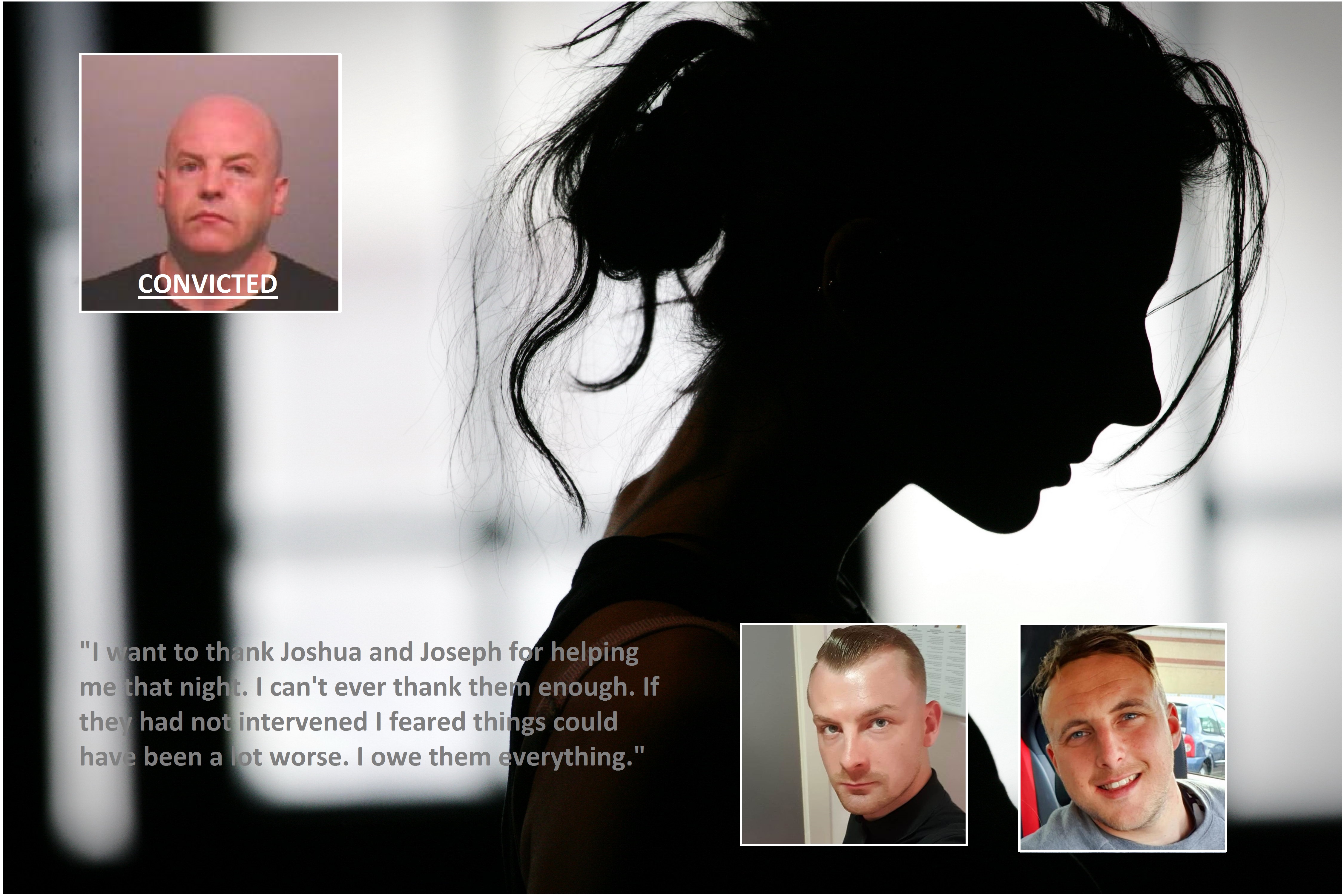 A victim of sexual assault has praised the actions of two strangers who came to her rescue after she was attacked in a hotel room.

Joshua White and Joseph Gray who were visiting Newcastle from London were staying in a hotel in Dunston in October last year.

They happened to be in the adjacent room of a victim who was being sexually assaulted by now convicted sex offender, Pearse Shaun Armstrong.

Armstrong, 40, of no fixed abode but from the Belfast area of Northern Ireland, met the victim at the hotel front entrance after a night out in Newcastle.

He followed her and a friend to their hotel room and entered without being invited. When the victim's friend went to ask for help to remove him from the room, he took his chance and began to sexually assault the victim.

As she shouted out in fear, the two vigilant neighbours came to the door where the friend asked if they could help get him out of the room.

When Joshua and Joseph entered the room of the victim, they saw the man without his top on and his trousers round his ankles as the victim ran out in a distressed state.

Both men managed to get Armstrong out of the room and took the victim to the reception of the hotel when police were called. Armstrong was arrested at the hotel.

The two men, who did not know the victim, also came from London to give evidence at a three-day trial at Newcastle Crown Court to support the victim and Armstrong was found guilty of sexual assault by a jury.

The victim, who cannot be named for legal reasons, praised the two men and asked if she could be put in touch with them after the guilty verdict to thank them personally.

She said: "I want to thank Joshua and Joseph for helping me that night. I can't ever thank them enough. If they had not intervened I feared things could have been a lot worse. I owe them everything.

"This has been the worst experience of my life and although he has been found guilty, it doesn't take away the impact of what he has done.

"If it wasn't for the two guys I'm not sure what Armstrong would have done. It makes me feel sick to think. I just want to say - Joshua, Joseph - thank you. Thank you for taking a risk that night. Thank you for saving me."

Detective Constable Simon Dobson who led the investigation said: "These two men and the victim's friend have helped protect someone who was unable to protect herself from a forceful man who was sexually assaulting her.

"Thankfully they were there that night. They've witnessed an awful incident and while of course, the victim has suffered hugely through this ordeal, all three witnesses have also had to experience something that you don't expect to see on a nice weekend trip.

"If it wasn't for Joshua and Joseph, and the victim's friend, I wouldn't like to think what could have happened but I would like to say how thankful I am to them for their actions and all they have done to support the investigation."

If you have been a victim of rape or sexual assault, whether this is recent or historic, please come forward and contact police on 101, or 999 in an emergency.