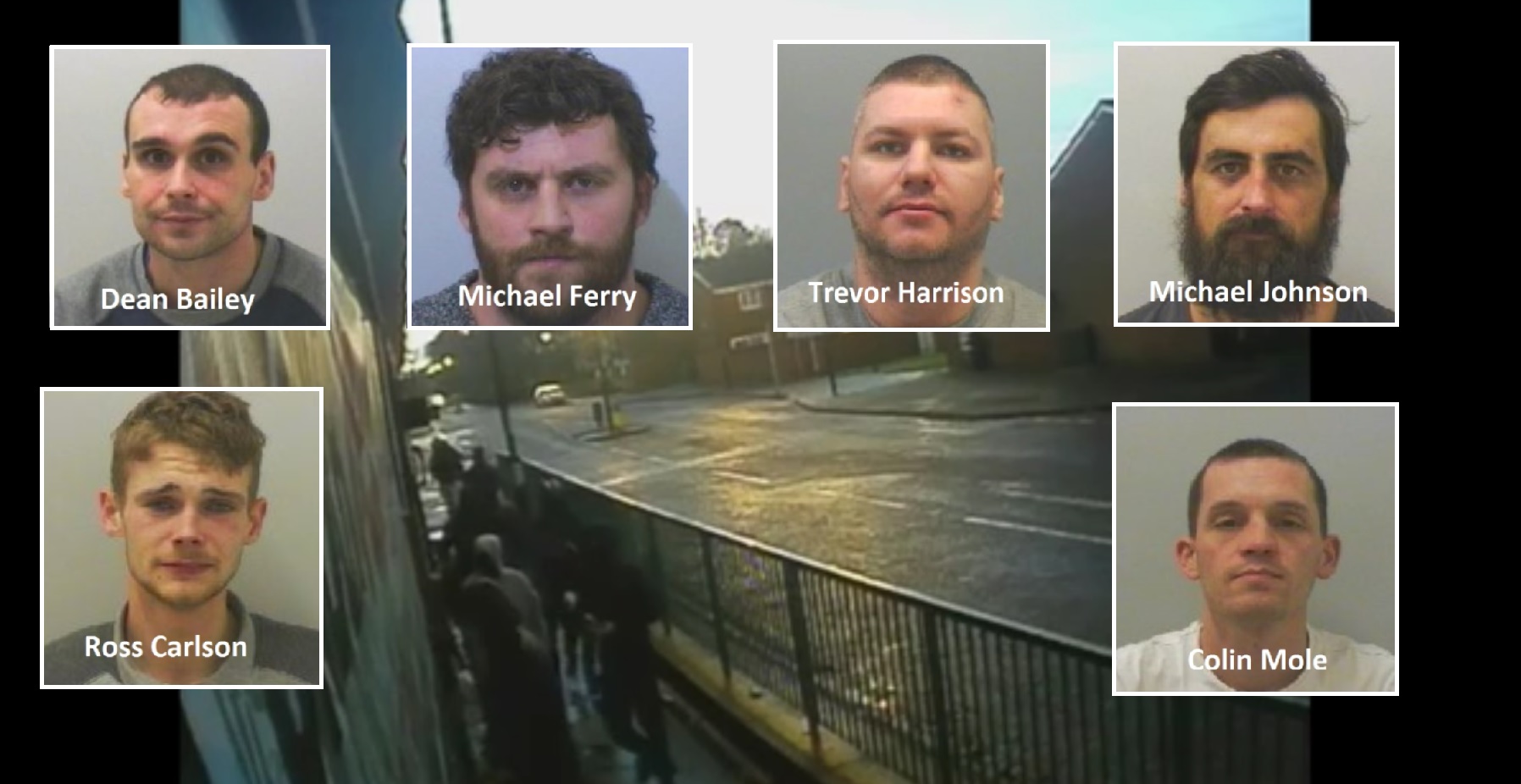 Six masked thugs who brandished metal bars and a machete at a Newcastle pub as part of a revenge attack are facing jail.

The men are set for a spell behind bars after they were this week convicted of planning an attack on a 30-year-old man.

It took place on the afternoon of December 8, 2016, when a gang of masked men sprung upon the victim as he was smoking outside the Fosse Pub in Walker.

A court heard how members of the masked gang sprayed him in the face with ammonia, pulled him to the ground and began to attack him with metal bars and a large knife.

The brutal attack only came to an end when people inside the pub heard the commotion and came outside to chase the gang away.

It was at this point that the gang smashed the windows of the pub before clambering into a white Vauxhall Vivaro van and fleeing the scene.

The victim, now 33, was rushed to hospital with a number of serious injuries including a fractured skull caused by a blow to the head with an axe.

A 51-year-old woman was also treated for minor burns to the face after being sprayed with ammonia during the altercation.

Detectives launched an investigation but the victim of the serious assault did not support the prosecution leaving them without their key witness.

However, the investigative team had already found the Vivaro van abandoned with some key items left inside and in the immediate area.

Clothing and weapons believed to be used in the attack were seized and tested for DNA that ultimately helped identify some of those men involved in the attack.

They were all later charged with wounding with intent, assault and violent disorder. The men denied the charges and the case went to trial but it was adjourned after an issue arose with the jury.

On Tuesday (July 9) the case was back before Newcastle Crown Court where the Crown Prosecution Service accepted guilty pleas from all the defendants on violent disorder.

The other charges were dropped as there was not enough evidence to prove if any of the six men had carried out the physical assault.

Following the case, Detective Sergeant Nick McKenna, said the case showed that police can secure convictions against violent thugs even when victims don’t support a prosecution.

DS McKenna, of Northumbria Police's Central CID, said: "This was a brutal attack outside a popular Newcastle pub and we are lucky not to be standing here talking about a murder case.

"The victim in this case was left with a fractured skull and could have easily died if it wasn't for the quick intervention of medical staff.

"It has taken a long time for this investigation to come to court and a lot of excellent police work has gone in to securing these convictions.

"We were able to secure clothing, weapons and discarded items that were directly linked to the assault and were central to the case.

"Ultimately it was the forensic evidence that have proved the downfall of this gang and we have secured convictions even when the victim does not support a prosecution.

"There is no place for this level of violence on the streets of Newcastle and anyone who takes the law into their own hands should expect to be arrested and put before the courts.

"I want to praise all the officers who have worked tirelessly to bring this case to court over the past two years and held this violent gang to account.”

Trevor Harrison was remanded in custody but the other five men were bailed to appear before Newcastle Crown Court for sentencing in September.