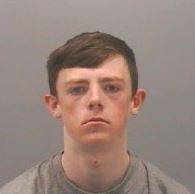 A teenager who was found riding an uninsured stolen motorcycle has been handed a driving ban and fined hundreds of pounds.

Daniel Dixon, 19, has also been ordered to carry out 200 hours of unpaid work after pleading guilty to a string of offences at court.

On April 19 this year woman reported to police that her motorcycle had been stolen from outside St Mary’s Cathedral in Newcastle.

The Peugeot Django, worth just under £2,000, had been parked outside the church but thieves had snapped the steering lock and fled with the bike.

An investigation was launched and within a week police had spotted Dixon riding the motorcycle through Newbiggin Hall.

He was able to escape police but officers later traced the bike to an address on Stamfordham Mews in Blakelaw.

They found it parked outside a property but rather than seize the bike they set up a covert operation and waited for Dixon to return.

When he did come back to use the bike, police pounced and placed him under arrest after winning a foot chase with the suspect.

He denied stealing the bike and in a police interview claimed he had bought it off an associate the day before.

Officers couldn’t prove Dixon, of Yewvale Road, Newcastle, had stolen the vehicle but he was still charged with driving a stolen motor vehicle.

He admitted the offence along with driving whilst disqualified, driving without insurance and possession of cannabis.

Now Dixon has been handed a one-year community order for which he must carry out 200 hours of unpaid work.

He was also handed an extended six-month driving ban and made to pay costs of £300 to the victim of the theft.

Detective Sergeant Craig Brown, of Operation Benelli, said Dixon will be put right back before the courts if they “get a sniff” that he is involved in motorcycle crime.

He said: “We have been very proactive in targeting those individuals that we believe to be involve in this type of opportunistic offending.

“Bike thefts have been a growing problem in the past year but we have been able to recover the majority of bikes stolen.

“This operation showed the lengths we will go to secure stolen property and to put offenders before the courts.

“On this occasion we could not prove that Dixon had stolen the motorcycle in question but he has still been convicted of a string of offences.

“He will have to pay a hefty fine and if we get a whiff that he is back on a bike then he should expect to be straight back before the courts.

“Anyone who has information about this type of offending should feel confident enough to contact police – we will take action.”

Northumbria Police’s Operation Benelli team cover are made up of a number of experienced and specialist officers based at Etal Lane Police Station.