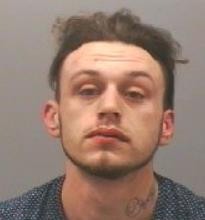 A violent thug who held a woman’s face over an oven stove in a jealous rage has been jailed for 11 years.

David Peter Ingram left his victim living in fear after assaulting her twice and carrying out a terrifying raid at her home in January this year.

Newcastle Crown Court heard how the 25-year-old had subjected his victim to violence as part of a jealous rage.

In one argument he punched his victim before forcing her head over a stove in a threat to burn her.

He left the address in Newcastle but then returned the next day with another man, both of them were wearing a mask to conceal their identity.

During the raid Ingram’s accomplice sprayed the victim with a noxious substance, believed to be ammonia, before the intruders fled the scene.

Police launched an investigation and Ingram was identified as a prime suspect.

He denied aggravated burglary and intending to cause grievous bodily harm but was convicted by a jury at Newcastle Crown Court earlier this year.

Now Ingram, of Strathearn Way, Newcastle, has been jailed for 11 years. He has also been handed a restraining order banning him from contacting his victim.

Following the case, Detective Constable Dayna McNally praised the bravery of the victim in the case.

DC McNally, of Northumbria Police's Safeguarding Department said: "While this woman has sustained some injuries, she has been lucky that Ingram has not caused her more serious injuries.

"What won’t heal are the emotional scars this woman has to face and to break into her home and subject her to such horrific abuse is something that will scar the victim for her the rest of her life.

"This woman was brave enough to come forward and report the incident to the police and it was absolutely the right thing to do.

"No one should have to face this kind of behaviour and now Ingram will face the consequences of his actions."