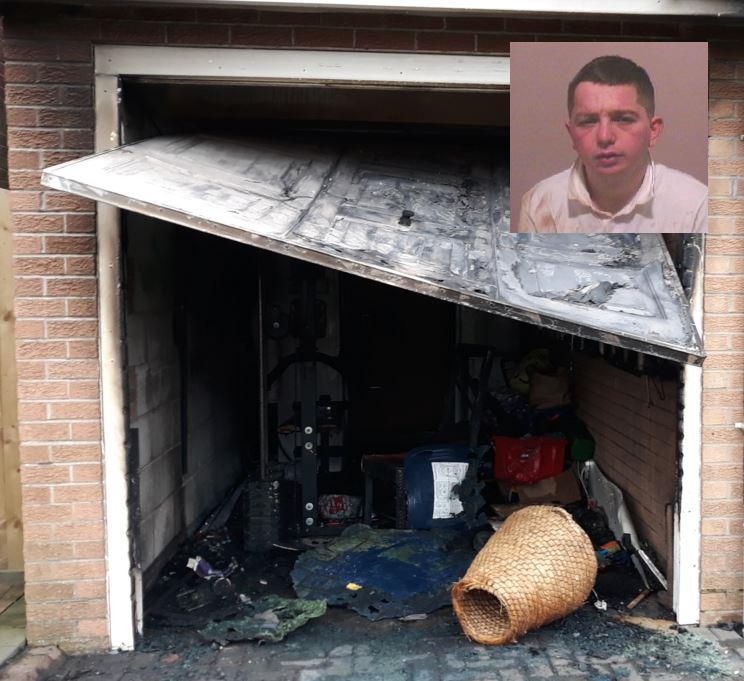 Arsonist jailed after setting fire to his family home

An arsonist is behind bars after setting fire to his family home when his father refused to give him money.

Matthew Gray, 22, set light to a wheelie bin and smashed the front window of his Sunderland home during a fit of rage earlier this year.

Gray, under the influence of either drink and/or drugs, turned up at the Stansted Close address in the early hours of February 13 and demanded £20.

But after these demands were rejected, Gray used a spanner to smash the front window before torching a wheelie bin inside the garage of the property, which quickly spread.

Police and the fire service arrived and found the house engulfed with smoke. Gray was later located hiding in nearby bushes and spat at the detention officer upon arrest.

Gray, of Stansted Close, Sunderland, pleaded guilty to destroying or damaging property recklessly as to endanger life, criminal damage and assault of an emergency worker.

On Tuesday, May 28, he was jailed for three-and-a-half years at Newcastle Crown Court.

Detective Constable Terry Robertson, of Northumbria Police, said: “Through his appalling and selfish actions that night, Matthew Gray endangered the lives of others and caused significant damage to his family home.

“His behaviour was spiteful and he acted in a fit of rage because he wasn’t given the money that he demanded. It is incredibly fortunate that nobody was seriously injured as a result of this incident.

"Gray’s actions will have an inevitable impact on his family. He must live knowing the pain he’s caused and face the consequences. The family have reconciled whilst Matthew has been in custody and they are willing to support him upon his release.

“I hope this sentence sends out a strong message that this type of behaviour will not be tolerated, and we will look to bring those who endanger the lives of others in our communities to justice.”

The court was told Gray arrived at the family home shortly after midnight on February 13 and unleashed a tirade of abuse after his parents refused to give him money.

Intimidated by his son’s behaviour, Gray’s father briefly left the house to allow the defendant to calm down.

But upon returning, he saw his home engulfed in smoke after a fire had been started in the garage. The rest of the family had already fled the house and contacted police and the fire service.

After the fire was extinguished, police found an uncooperative Gray hiding in bushes nearby at about 1.20am. He was subsequently arrested and charged with a number of offences.

In a victim impact statement read out in court, Gray’s father said: “Matthew’s behaviour is totally out of control and as a family we are absolutely petrified of what he is capable of doing. As a hard-working family, this is incredibly hard to take. I just want my family to be safe."

Gray admitted destroying or damaging property recklessly as to endanger life, criminal damage and assault of an emergency worker.

But at the sentencing hearing on May 28, Gray was cleared of arson with intent to endanger life. He was jailed for a total of three-and-a-half years.