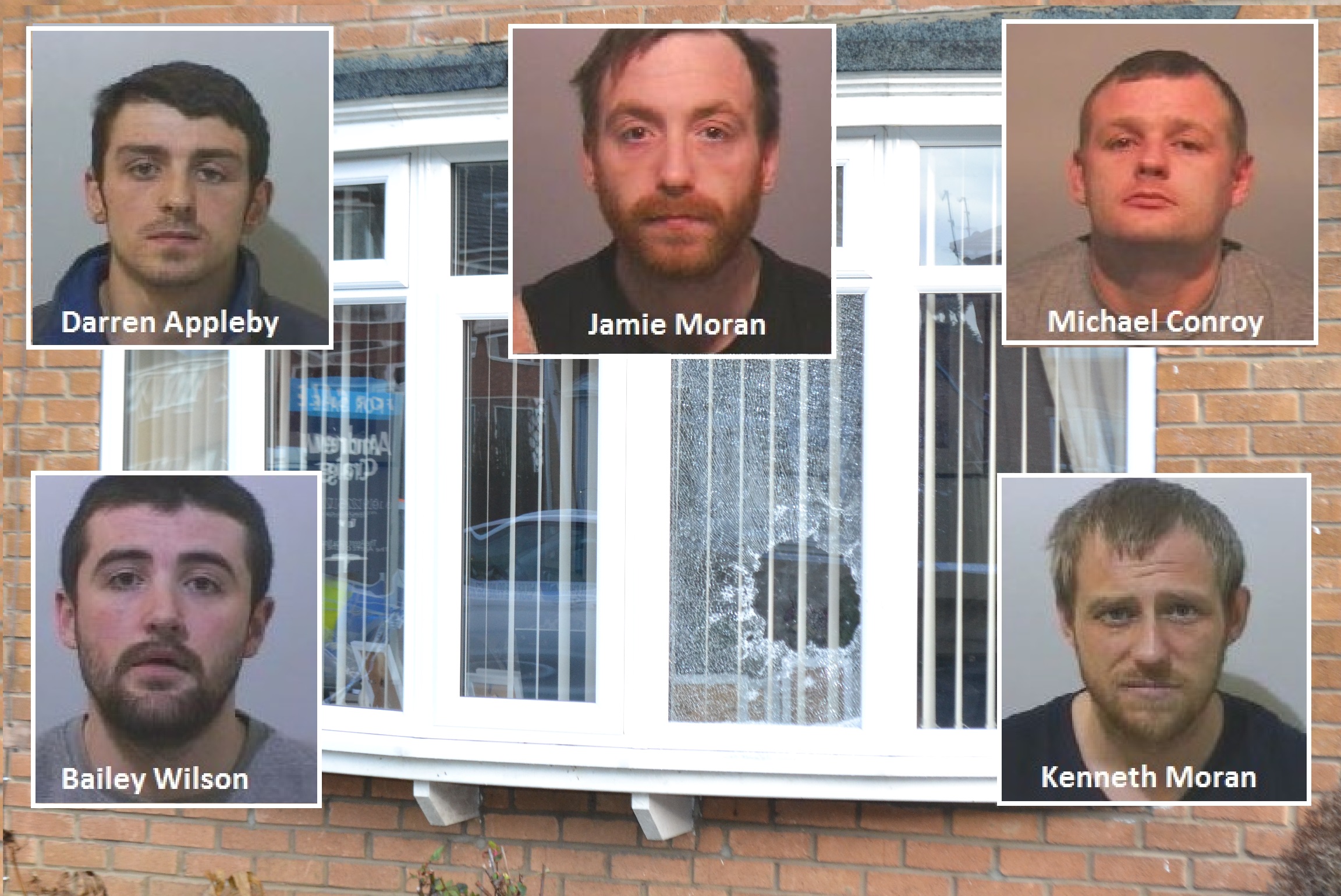 A dangerous armed gang have today been jailed for a total of nearly 100 years for their part in a violent feud that saw guns fired on the streets of Newcastle.

Six men were convicted in March following a 12-month investigation by Northumbria Police into an ongoing feud between two rival gangs.

And today (Friday) five of the men were jailed for a total of 96 years at Leeds Crown Court for their involvement in the violent scenes across the city last year.

Detectives had launched an investigation in January 2018 after shots were fired at three houses in Benwell, Cowgate and Brunswick.

It had also been reported to police that a petrol bomb had been thrown towards the house in Cowgate but failed to cause any damage.

A court was told how the shootings had followed a spate of violent exchanges between two rival gangs that included a burglary and numerous reports of vandalism dating back to 2017.

Police trawled CCTV, spoke to hundreds of residents, deployed high visibility patrols and made dozens of arrests as part of their investigation.

In November last year, one side of the factions were convicted and jailed following a police sting led by detectives at Northumbria Police.

And now their rival gang are also behind bars after being convicted in relation to two shootings in the spate of violence last year.

Darren Appleby, Jamie Moran, Kenny Moran, Michael Conroy, and Bailey Wilson were jailed for a total of 96 years at Leeds Crown Court today. A sixth man, Sean Ree, will be sentenced at a later date.

Northumbria Police’s Detective Chief Inspector Paul Woods said he was delighted that a "dangerous and violent criminal gang" had been taken off the streets.

He said: "This case focused on two rival organised crime gangs who have no respect for the law or for the members of the public who were caught up in their reckless behaviour.

“Our streets are a safer place today because a team of detectives, officers and police staff worked day and night to gather the evidence needed to secure these convictions.

"Under the banner of Operation Sentinel that hard work continues and we will not let organised crime groups put lives at risk.

"This should send a strong message to all organised crime gangs across our region - if you take the law into your own hands then we will take your freedom."

Police have not been able to establish what sparked the feud that led to the violence between the two rival gangs in 2017 and the beginning of 2018.

However, following the spate of incidents, an investigation was launched by Northumbria Police and detectives used intelligence from the local community to identify a huge list of suspects.

Hundreds of witnesses were spoken to and officers carried out forensic enquiries on bullet casings left at the scenes of the violence.

This resulted in a police raid on an address on Wingrove Avenue in Fenham on February 14, 2018, in which police found a sawn-off rifle and ammunition hidden under the floorboards.

During the raid, Appleby and Jamie Moran were arrested attempting to flee the address.

Michael Conroy’s DNA was later found on bags containing ammunition found at that address. Detectives were able to prove the recovered firearm was used in the shooting in Benwell.

All six men were arrested and charged with firearms offences linked to the violence and on March 15 they were convicted after a trial at Newcastle Crown Court.

Appleby, Conroy, Wilson, Jamie Moran and Kenneth Moran, were all found guilty of conspiracy to possess a firearm with intent to endanger life in relation to the Brunswick shooting.

Appleby, Conroy and Jamie Moran were also found guilty of conspiracy to possess a firearm with intent to endanger life in relation to the Benwell shooting.

Sean Ree, 25, of Henniker Point, Stratford, London, was not sentenced today due to issues with his defence team. He will be sentenced on July 5 instead.

Rival gang members were jailed in November 2018 after detectives linked them to a sawn-off shotgun found hidden in shrubbery in Denton Burn.

This weapon could not be forensically linked to the violence but it did match the specification of a weapon known to be used in an attack on an address in Cowgate.

The men weren’t convicted in relation to the shooting but they were jailed for a total of 23 years and two months at Newcastle Crown Court after admitting a string of firearms offences last year.

• Officers believe the feud began in July 2017 with a burglary on Whitbeck Road in Denton – the home of Paul Scott, 31, of Whitbeck Road, Newcastle, who was jailed as part of the case in December.

• In the months that followed a cafe on the West Road owned by Scott was damaged four times, including on one occasion where masked men entered and smashed up the property.

• The violence escalated and on January 4, 2018, Kenny Moran, Bailey Wilson and Sean Ree attended an address on Drysdale Court in Brunswick. Shots were fired at the address – officers believe the attack was meant for a property where Paul Scott was staying – but it was in fact the neighbour’s property. Nobody was injured.

• Three days later an address on Deepdale Crescent in Cowgate that was linked to the family of Michael Conroy was targeted with a petrol bomb. Again nobody was injured, but the very next day the address was targeted in a second shooting while Darren Appleby, 23, was inside.

• A jury at Newcastle Crown Court were told how Appleby, Conroy and Jamie Moran then conspired to fire shots at a property on Oakfield Gardens in Benwell the very same evening. Two firearms were discharged at the address in a suspected revenge attack before the offenders fled the scene. A motorbike similar to one belonging to Appleby was captured on CCTV in the area at the time of the shooting.