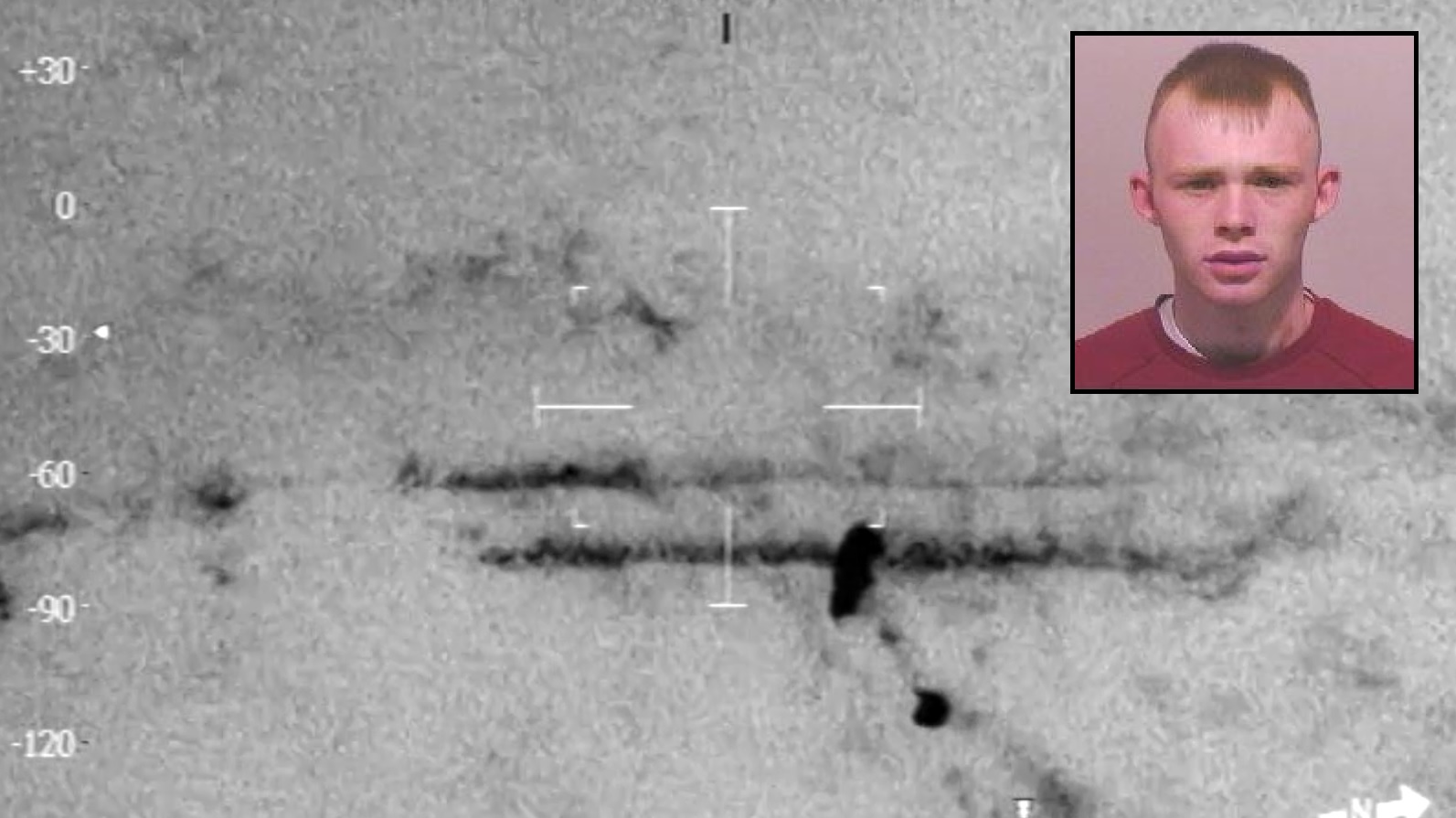 This is the moment a teenager was found hiding in bushes by a police dog - after driving at more than 100mph into oncoming traffic on a busy motorway.

Last Wednesday Liam Facey was spotted by police driving a BMW in South Shields but he refused to stop when they asked him to pull over.

Instead the 19-year-old led officers on a high speed pursuit during which he hit speeds of more than 100mph, drove through red lights and on the wrong side of the road.

A National Police Air Service (NPAS) helicopter was dispatched to assist officers on the ground and the crew were able to direct them to the suspect.

However, officers were forced to abandon the pursuit when Facey turned onto the wrong side of the road on the A19 and nearly collided head-on with a police car.

The police helicopter continued to follow the silver BMW 318ti until he turned off the motorway and abandoned the vehicle on the roadside.

He fled into woodland and NPAS were able to direct police search teams to the area where Facey had fled.

PC Helen Kane and her police dog Ziva were dispatched in the area, again guided by the helicopter crew, and within minutes the six-year-old Belgian Herder had found the suspect hiding in the woods.

He was arrested and later charged with dangerous driving, driving whilst disqualified, driving without insurance and failing to stop for police.

Facey, of no fixed abode, pleaded guilty to all charges at South Tyneside Magistrates’ Court and faces jail when he is sentenced next month.

Following his conviction, police have released footage from the police helicopter and PC Kane’s body worn video that showed the moment he was found by Ziva.

He said: "This pursuit started in the early hours of the morning. It was pitch black and pouring down with rain, so the conditions were very difficult.

"The driver knew that he had been caught inside an uninsured car and was prepared to do anything necessary to avoid being arrested by police.

"It is through sheer luck that he was not involved in a serious accident and the manner of his driving put the lives of other innocent road users at risk.

"In fact, his driving was that dangerous that our officers were left with no choice but to abandon the pursuit to try and reduce the risk to other cars.

"It was during this time that Liam Facey took the opportunity to abandon the vehicle so that he could take cover in woodlands just off the A19.

"What he didn't consider was just how good our police dogs can be and PD Ziva was quickly able to catch his scent and find him hiding in some bushes.

"Thanks to the teamwork of the Dog Section, our traffic officers and the police helicopter we have been able to get the suspect into custody.

“They have passed the case to the investigative team at Southwick Police Station who have then gathered the evidence that ultimately secured an early guilty plea and a conviction.

"Liam Facey now faces a spell behind bars and this should come as a stern warning to anyone who thinks they can get the better of our operational teams."

The NPAS helicopter was deployed from Newcastle, one of 14 NPAS bases supporting police forces across England and Wales.

Ian Vause, Assistant Operations Director for NPAS in the North East, said: “Vital information can be passed to ground units by an NPAS helicopter crew overhead, allowing for effective tactics to be used.

“I’m pleased our crew were able to assist Northumbria Police in bringing this dangerous driver to justice.”

Facey was also wanted for outstanding motor offences at the time of his arrest and will also be sentenced for them when he appears before Newcastle Crown Court for sentencing on July 11.