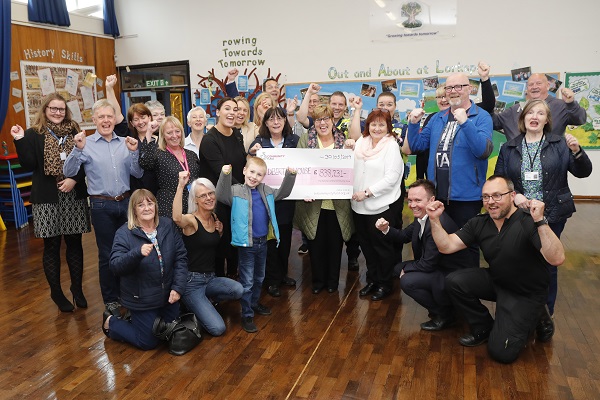 Gateshead community secures funds to help it thrive with support from Council, Police and partners

Residents in Beacon Lough East will benefit from £2.1m funding to help their community thrive after a boost from The National Lottery Community Fund, the largest funder of community activity in the UK.

The funds will be used to create an innovative partnership between residents, Gateshead Council, Northumbria Police, several Gateshead-based charities, Larkspur Primary School and a number of public sector partners.

The five-year scheme will see partners work with residents to redesign and refurbish a community building that will act as a base and drop in point for community development workers, police community support workers, GP community link workers as well as a Council team that will be able to focus on housing, council tax, environmental health and social care issues.

It came about after a group of residents. who were determined to make their estate a happier, healthier, friendlier place to be, approached Northumbria Police and the Council. They wanted to improve their estate which suffers from high levels of anti-social behaviour, issues with housing, fly tipping and does not have the benefit of any community organisations.

A successful bid led by community charity Edberts House secured £838,231 from The National Lottery Community Fund. The remaining funding over the five-year life of the project consists of £160,000 from the Council together with officer resources worth £910,000, as well as £221,754 committed by Northumbria Police, Newcastle Gateshead CCG and Citizens Advice Gateshead, indicating the level of joint commitment to bring about community change.

Edberts House Chief Executive, Sarah Gorman, said: “We are thrilled to have secured such a significant amount of money from The National Lottery Community Fund. It has been a joy to work with the residents and the wider members of the partnership, who have jointly committed time and resources. Together we hope to make a real difference to the lives of people living in Beacon Lough East.”

Council Leader Martin Gannon said: “This project gives the Council and its partners the opportunity to combine and pool resources differently in order to tackle health and social inequalities which have been exacerbated by austerity. By working directly with, not just for, residents we want to fundamentally change services and communities for the better.

“We hope this will be the first of a number of partnership projects across Gateshead that will have a positive impact on residents and communities.”

Harm Reduction Inspector Alan Pitchford, from Northumbria Police said: “This is a fantastic initiative to be part of. The money will go a long way to help further develop the community, strengthen partnership working and engagement with the public as well as provide a stable base for education on important issues impacting the community.

“The initiative will be open to local residents of all ages and backgrounds. There will be specifically targeted activities such as children’s groups, young people’s groups, and women’s activities; however the project will be open to any and all wanting to drop in and benefit from a safe, warm, friendly environment.”

Duncan Nicholson, Head of Regional Funding at The National Lottery Community Fund, said: “As the largest funder of community activity in the UK, we believe that communities thrive when people are in the lead. Thanks to National Lottery players, we’re able to help people - like local residents in Beacon Lough East - turn their ideas and inspiration into practical projects and partnerships to make the world around them stronger and better connected.”