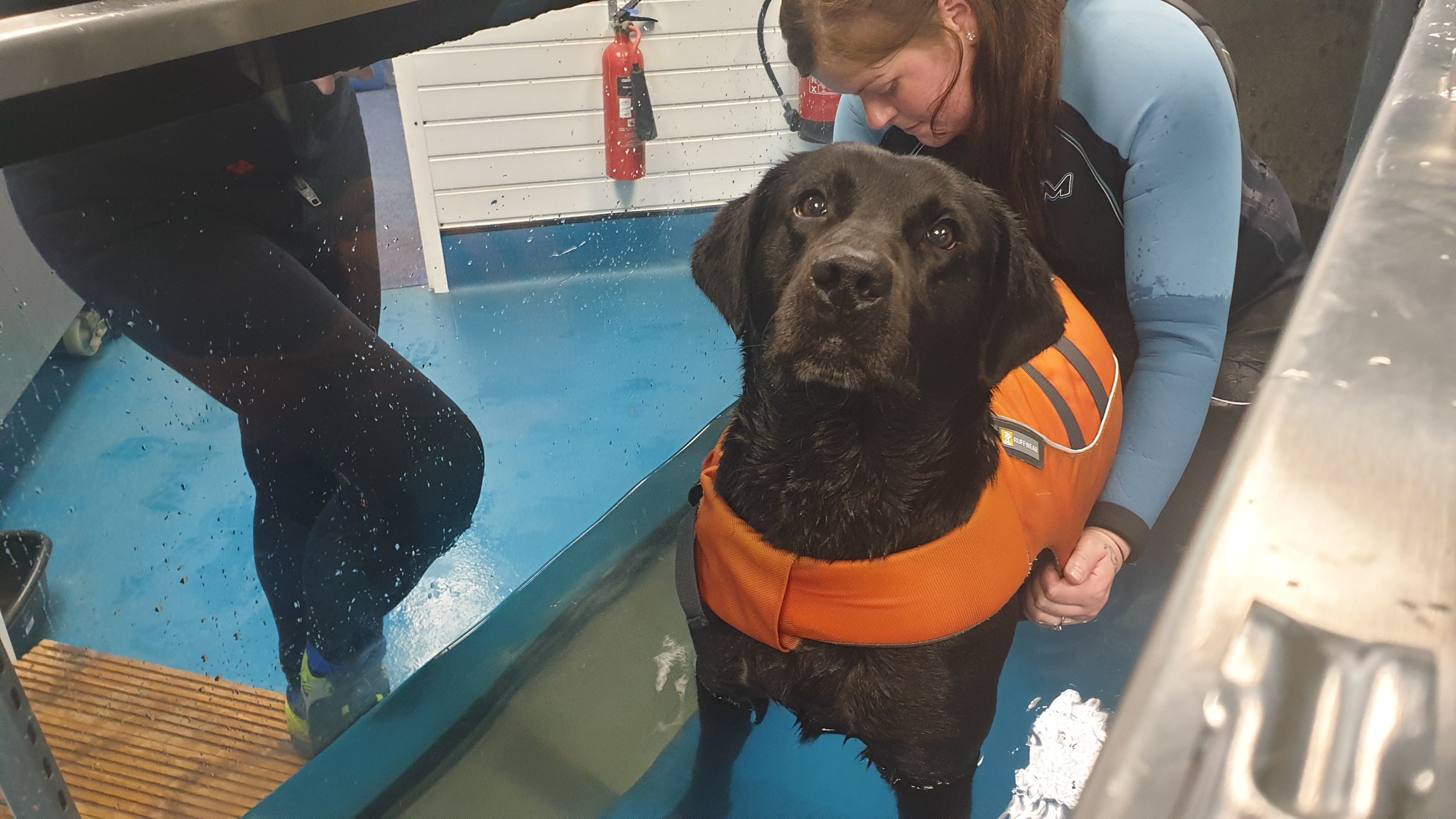 A police search dog who was left bed-bound after a serious leg injury is on the road to recovery – after a work-out on a water treadmill.

PD Felix is best known for sniffing out drugs, cash and weapons as a specialist search dog with Northumbria Police’s Dog Section.

He is a valuable asset in locating evidence and helping to put criminals behind bars.

But for the two months Felix has been unable to work after a serious leg injury left him bed-bound.

In April he was on a walk off-duty with his handler PC Helen Kane when he landed awkwardly after trying to jump over a stream.

PC Kane took him to the vets where the four-year-old pooch was diagnosed with a ruptured cruciate ligament and had to undergo surgery.

That left him confined to bed-rest and with a giant cone on his head to prevent him nibbling at the wound.

He’s still a few weeks away from returning to work but he is one step closer after a session in a water treadmill.

Black Labrador Felix underwent the physio session at Woofs ‘n Scruffs in Washington and now it is hoped he will be back on the beat in just a few weeks.

PC Kane said: “The vet recommended he had a go on the water treadmill as it would help his recovery and get him back to work quicker.

“He has hated not being able to come and do his job. Trying to calm him down has been a nightmare and he’s desperate to get back on shift.

“When he got in the treadmill he was a bit shell-shocked, he didn’t quite understand what was happening, but he soon got the hang of it.

“David and Carly helped him through it and they said he did a good job so we’re hoping it will get him back to full fitness a little bit quicker.”

Woofs ‘n Scruffs have had dogs from Northumbria Police in their centre before after offering free swimming lessons to a litter of Cocker Spaniel puppies.

They offer hydrotherapy sessions, dog training, dog boarding and grooming services out of their centre in Washington.

But this week they were helping with the rehabilitation of Felix and co-owner David Potts was full of praise.

David said: “He was a little bit nervous to start but we got there eventually and by the end you'd think he had been in there since he was a puppy.

“For injuries like Felix, cruciate ligament rupture, it's the perfect exercise because it's only partially weight baring so it removes quite a lot of his body weight.

“There's quite a lot of force walking against the water and he's walking in warm water so that opens blood vessels and supports the repair.

“I think Felix's vets indicated he will probably need about six sessions but every single case is different and we build a plan specifically for that dog rather than for the condition.

“It will all about how he responds to the treatment but we can’t wait to have him back with us again to make some more progress.”

To find more about the services offered by Woofs ‘N Scruffs, visit their website at www.woofsnscruffs.com.