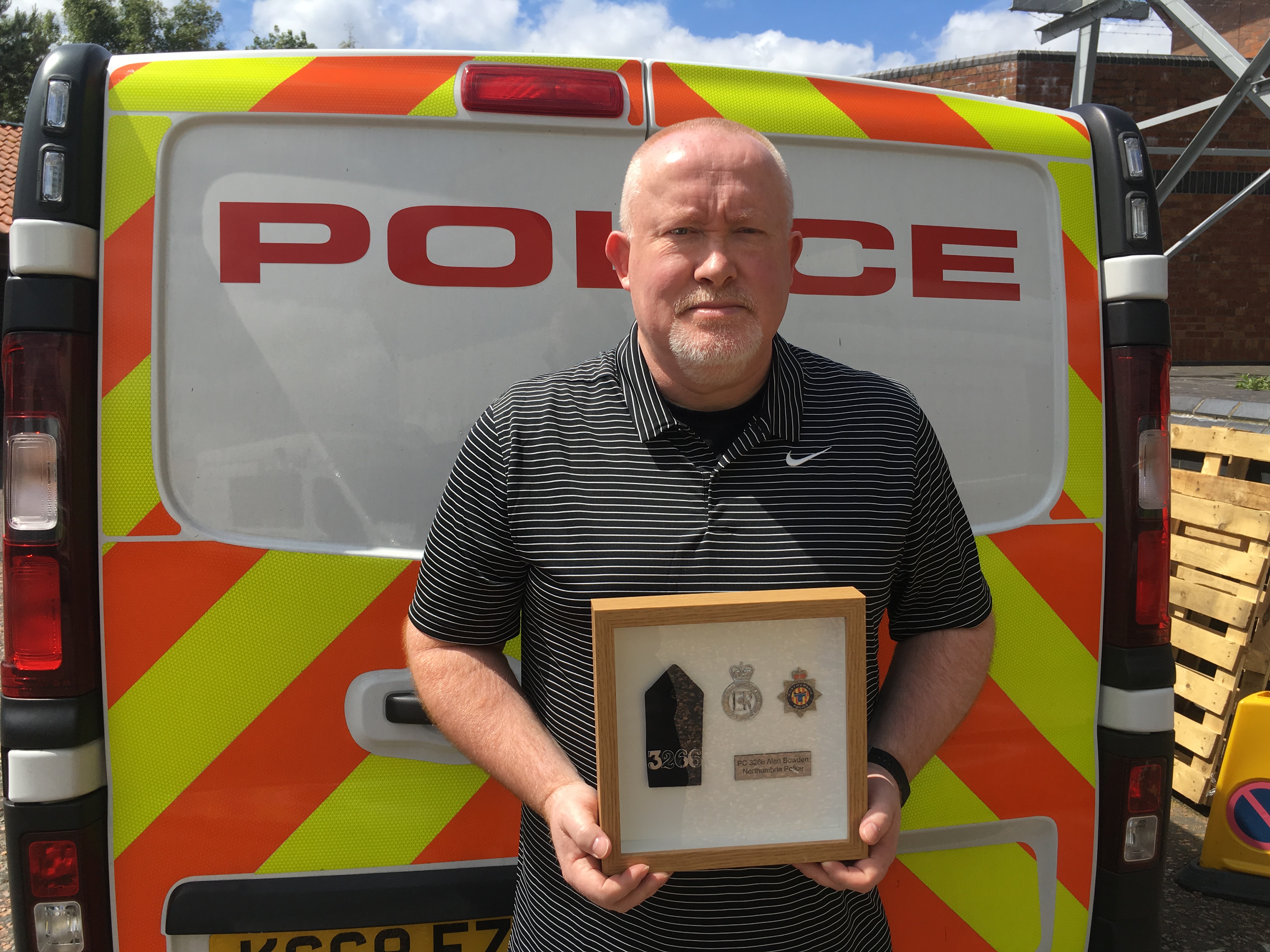 A much-loved PC who developed an innovative way to tackle anti-social behaviour in Sunderland has bid a fond farewell to the Force.

PC Alan Bowden has walked his beat for the final time after an “unforgettable” 27 years of service with Northumbria Police.

The 50-year-old, whose love for policing traces back to his youth when he watched crime series Starsky & Hutch and The Sweeney, served the community of Pennywell for much of his career.

And it was there that he teamed up with Academy 360 head teacher Rachel Donohue to develop a pioneering way to tackle youth disorder – which helped see anti-social behaviour drop by up to 80 per cent on the surrounding estates.

The ground-breaking initiative saw the school’s head teacher join PC Bowden on some weekends to carry out patrols as part of a two-pronged, problem-solving approach to tackle anti-social behaviour.

PC Bowden would then host assemblies in the school as he got to know the pupils and tried to change young peoples perceptions about police officers, and what they represent.

“I always wanted to join the police,” PC Bowden explained. “But when I was young, we had little interaction with the police when I was at school, other than the odd road safety assembly.

“But I think it’s really important to work with young people and schools. We don’t want children to feel like they have to run away from a uniform out of fear of reprisal - we want children to run towards a uniform whenever they think they’re in danger.

“That’s really where this idea stemmed from. When Rachel took over as head teacher of Academy 360 in September 2015, I went in and we had a fruitful first conversation about what I’d like from her and her staff to assist the community, and likewise what she wanted from me.

“I’ve found that over the last three-and-a-half years, that relationship has gone from strength to strength. I got involved in as much as I could at the school, whether it be behavioural issues, discipline or truancy complaints at an early stage.

“We recognised that the children who would tend to cause problems in school are more than likely going to be the same individuals who came onto our radar out of school, so it was a great opportunity to build a real relationship with these kids and steer them away from trouble.

“Every six weeks or so, Rachel would come out on volunteer patrols with us and help deal with any anti-social behaviour issues in the area. We’d visit the various youth clubs together, the boxing club and places where large groups would hang around, which can cause concerns for some residents.

“With Rachel’s help, and as a result of the kids regularly seeing my face in school, I’d be able to engage with them on first-name terms. I found that anti-social behaviour would drop whenever Rachel was out with us, because any troublemakers would know they’d be instantly recognised.

“I’ve served the people of Pennywell for the best part of 20 years, and I’m incredibly passionate about the area. Hopefully, I’ve played a small part in making the area a safe and pleasant place to live.”

As part of their mutual relationship, PC Bowden hosted more than 50 assemblies at the school over three years in which he talked to youngsters about issues including behaviour, attendance, mental health awareness and the Mini Police.

He made quite an impression in that time too, which was evident earlier this month (June) during his final week with the Force when school staff and students arranged a special assembly for him as a gesture of thanks.

“I’d like to extend my sincere thanks to Alan who has done a huge amount of work with Academy 360 over the last four years,” said Mrs Donohue, head teacher at the school.

“He is exceptionally professional, very supportive and has certainly gone above and beyond his role as an officer. Our partnership has developed ever since our first meeting in 2015, and he has become a real friend of Academy 360.

“Joining Alan out on patrol was really useful for us as an Academy, because students saw school staff and local officers working in partnership to tackle anti-social behaviour. We did see an impact both inside and outside the Academy, with a significant reduction of serious incidents.

“We have 847 children at the Academy aged from four to 16, and I know they have gained a lot from Alan’s contribution and inputs at the school. We are really grateful for the support he has offered – and want to wish him the best of luck with the future.”

PC Bowden joined Northumbria Police in March 1992 after initially developing a passion for detective programmes while growing up with his family in Gateshead.

During his time with the Force, he tutored a team of 12 bushy-tailed student officers, became involved in the Mini Police initiative in Sunderland and even spent a month on secondment in Guernsey in preparation for a royal visit.

But what inspired him to pull on his uniform each day for 27 years?

“When I was a kid, I became a bit of a TV addict with all the crime programmes, and I also used to watch the news a lot and see stories of people doing bad things to good people,” PC Bowden said.

“I remember chatting to my mam on a number of occasions and asked, ‘how do bad people get away with stuff like that?’

“The conversation would then always get on to the police and the difficult job they had, and I suppose that influenced me and made me realise that I wanted to make a difference in whatever career I pursued.

“While I was an officer, I was a tiny cog in a big machine, a huge organisation – but I always thought that my work as a cop in the community I served would make a difference. If I helped one resident in a positive way, that might influence the way they think about Northumbria Police as a whole.

“I think my experience as a kid and my interest in the police also inspired me to get involved with the Mini Police. I know we’ve got the cadet scheme which runs from age 14-plus, but with the Miniolice, it presents an opportunity to influence children at an even younger age.

“That’s why I got Academy 360 involved, as well as Southwick Primary and Easington Lane Primary, and it was absolutely fantastic to work with the young kids, help them understand how the police work and form that relationship with them from a young age.

“I’d hope some of the children we’ve worked with will now look at the police as a possible career option, while others may talk to their friends, their parents, whoever – and explain that we are good people, the police are there to help, and we can all work together to make the area a safer place.”

For PC Bowden, retirement from the Force is bittersweet.

While he looks forward to the future, in which he hopes to continue working in the community in some capacity and spend some quality time with his family, he leaves a profession in which he showed unrivalled enthusiasm.

After leaving the station with a bag-full of gifts and a lifetime of memories, he admits he looks to the future with great anticipation.

“It is a wrench to leave,” he said. “I’ve thoroughly enjoyed my 27 years’ service and I’ve met some fantastic people along the way.

“But my options are open. I’m passionate about the Sunderland area – I ideally want to continue doing some kind of work in the area, as I’m only 50 and I still want to help people, to make a difference in whatever way I can.

Inspector Marie Pollock was among those to pay tribute to the retiring PC and spoke of the legacy he leaves behind in Pennywell and beyond.

“I quickly warmed to Alan in such a short space of time,” Insp Pollock said. “I identified early on that he had a passion for community policing, and in that, he had a particular strength in working with children in schools and he wanted to serve the community well.

“He did that, and did so with an unrelenting passion. He had a nice approach when dealing with young people. He would enforce but also educate, and that’s what I liked about Alan – he looked at the bigger picture and would then adopt a problem-solving approach.

"He will be a big miss to the team and Sunderland West, and I’d like to wish him the very best of luck for the next chapter in his life.”