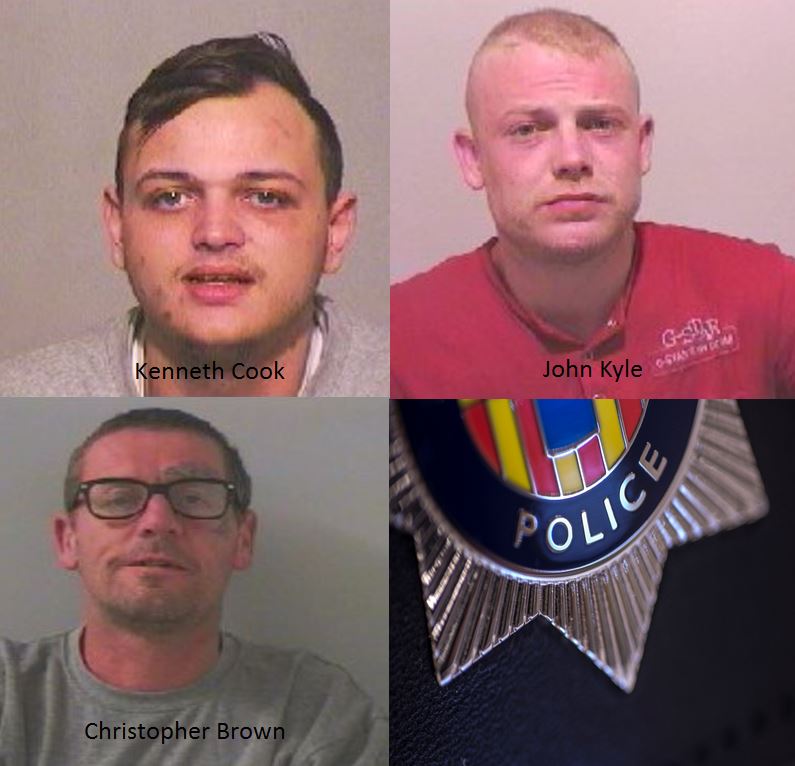 'One of the worst crimes I’ve ever investigated': Trio convicted after woman snatched off streets for £2,000 ransom demand

Kenneth Cook, 26, John Kyle, 30, and Christopher Brown, 42, are due to be sentenced at Newcastle Crown Court in September

Three men have been convicted of blackmail after a woman was snatched off the streets and a ransom demand of £2,000 made to her boyfriend.

The victim was subjected to the terrifying four-hour ordeal in June 2018 after she was kidnapped by strangers as she walked with her partner in South Shields.

Her captors threatened to cut her throat and send a gruesome image to her boyfriend unless he paid them a four-figure sum.

Suffering a broken breastbone as a result of the violence used against her, the victim was later dumped from the car in Hebburn, five miles from where she was taken.

Now Kenneth Cook, 26, John Kyle, 30, and Christopher Brown, 42, have been convicted for their roles following a trial at Newcastle Crown Court which concluded on May 24.

Detective Constable Julie Jackson, of Northumbria Police, says the case was “among the most disturbing she has investigated” in 29 years' of service.

“This was a horrific and despicable crime,” Det Con Jackson said. “It’s hard to comprehend the terror that the victim was subjected to on that night.

“She was a completely innocent member of the public who was minding her own business, walking down the road with her boyfriend.

“Her attackers bundled her into a car and subjected her to hours of psychological and physical abuse. After driving her away, they then threatened to kill her unless her partner paid them for her release.

“I’ve been with the Force for almost three decades and this is one of the worst crimes I’ve ever had to investigate. The victim has shown incredibly bravery throughout this investigation, and I sincerely hope that these convictions can give her some kind of closure.

“This was a complex case which involved a number of detectives, and it reaffirms our commitment to protecting the public and bringing those who threaten the fabric of our communities to justice.”

The court was told the couple visited the One Stop shop on Whiteleas Way, South Shields, on the evening of June 11 last year and Kyle slammed the door on them as they were trying to leave.

As the victim and her boyfriend later walked towards their home, a black Vauxhall repeatedly drove past the pair and they were confronted by the group.

The man, who gave his girlfriend the shopping bags and urged her to get to safety, was then chased by the gang but managed to get away.

However, the female victim encountered the vehicle again shortly after and was forced into the back seat of the car.

She was then ordered to make several calls to her partner, and when it connected, one of the men warned they would “cut her throat and throw her in the Tyne and send a photo of it” if he did not pay a £2,000 ransom.

The gang then drove the terrified woman to the banks of the River Tyne, where she was attacked by Cook, suffering a broken breastbone.

When the men failed to receive the money they had asked for, they dumped the victim in Hebburn before police managed to locate her.

“I’m terrified to stay in my house alone and I’m also terrified to leave,” the victim said in a statement read out in court.

“I cry all of the time. I don’t understand why they did this to me – I’ve never hurt anyone.”

Cook, of Bensham Bank, Gateshead, admitted blackmail – and was found guilty by a jury of causing grievous bodily harm with intent and kidnap.

Kyle, of Ribble Walk, Jarrow, denied kidnap and blackmail but was found guilty following a trial.

Brown, of Grosvenor Crescent, Hebburn, denied blackmail claiming he had little recollection of what he did that night due to intoxication. He was found guilty by a jury.

All three are due to be sentenced on September 30.